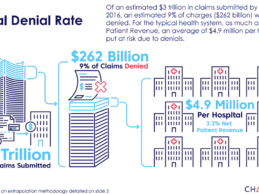 A new analysis by Change Healthcare of $3 trillion in medical claims submitted to payers last year revealed 9% of charges, representing $262 billion, were initially denied. For the typical health system, as much as 3.3% of net patient revenue, an average of $4.9 million per hospital, was put at risk due to denials. While 63% of these claims were recoverable on average, reworking each denial costs providers roughly $118 each, or as much as $8.6 billion in appeals-related administrative
END_OF_DOCUMENT_TOKEN_TO_BE_REPLACED 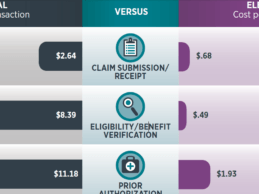 Reducing manual business transactions could save healthcare $9.4 billion in savings, according to new data released today in the fourth annual 2016 CAQH Index. The index reveals that conducting resource-intensive manual transactions are costing U.S. health plans and healthcare providers as much as $11 more per transaction and on average $6 more than when conducted electronically. CAQH Index Overview The fourth annual CAQH Index measures adoption, costs and, for the first time, provider labor
END_OF_DOCUMENT_TOKEN_TO_BE_REPLACED