We’ve known for a few years that income correlates with health in a major way. From the length of life to stroke risk to self-reported health status, the more access, opportunity, and means of upward mobility a person has, the better their projected health outcomes.

Waves of organizations are stepping up to help put things on a better course. Accountable and managed care organizations like Upward Health are working with payers, providers, and local governments to bring doctors, nurses, and community health workers to underserved neighborhoods. In some places, networks like L.A. Care have sprung up to give low-income patients affordable access to doctors and hospitals.

But all of these initiatives live or die by their ability to connect with and engage patients who may be reluctant to take advice from medical professionals, especially from outside their communities. If we’re going to move the needle on low-income health outcomes, we have to connect with people directly through the technology they use every day — their mobile devices.

The Income Barriers to Health

Delivering care to low-income populations — and more accurately populations with low socioeconomic status (low-income, low-education, low upward mobility, and lack of insurance) — is complicated by some deeply human challenges. Obviously, not all people of low socioeconomic status are minorities, but they represent a disproportionate bulk of this group, with the economic gap widening since the 2007 recession.

Though it varies by city and other factors, on average, minority groups have a higher distrust of doctors than their white counterparts. Even though many of these individuals say they’ve seen a physician in the last year, they may not trust that doctor when it comes to

1) their competency to refer them to a specialist when needed;

2) commitment to putting the minority patient’s medical needs above all other considerations;

3) influence by health insurance company rules on the doctor’s decision making; and

4) performance of unnecessary tests and procedures.

The reasons for this distrust are complex but entirely valid. There is plenty of evidence of current and historical inequitable health treatment for black Americans. Meanwhile, one-quarter of Latino adults in the United States are undocumented, making them ineligible for Medicaid and afraid to sign up for ACA health insurance. Add in a language barrier or communication gap, and it’s unsurprising minority groups are wary of the healthcare system.

Cultural norms can come into play as well. Back in 2012, the Census found that 72 percent of Hispanics say they never use prescription drugs. The reason seems to be, in large part, a stronger belief among Latinos in natural medicine and alternative practitioners. When a Hispanic person feels ill, they’re likely to ask their families for home remedies instead of turning to medication.

For all these reasons, bussing mostly white medical doctors and nurses into low-income minority areas won’t help very much on its own. We have to address the trust barrier if we’re going to start driving meaningful outcomes for low-income groups.

There’s a very important reason we have to address this gap quickly — poverty and chronic disease constitute a vicious cycle.

According to the CDC, some of the most common causes of illness in the United States are heart disease, cancer, chronic lung disease, stroke, Alzheimer’s disease, diabetes, and chronic kidney disease.

These chronic conditions tend to be more common and/or severe among minorities, partly due to the healthcare disparities outlined above, but also due to behavioral risk factors like inactivity and smoking and limited access to healthy foods. Food insecurity, for instance, has proven to be associated with cardiovascular risk factors.

Of course, once someone is sick, medical bills mount quickly, further pushing the patient into poverty.

The CDC has devoted tens of millions of dollars to environmental approaches, healthcare system interventions, and community programs linked to clinical services. Still, chronic disease numbers are expected to continue climbing for heart disease, Alzheimer’s, cancer, and others.

All of this adds up to not only a huge moral emergency for the healthcare field but a financial one. Ninety percent of U.S. healthcare expenditures go toward people with chronic and mental healthcare conditions — that’s right around $3.5 trillion per year, or roughly 4.8 times this year’s national defense budget.

We have to come at this problem from a variety of angles if we want to stem the tide. One area where we need more effort and research is using mobile technology to treat and engage people in their health and healthcare on an ongoing basis, both before and after they begin suffering from chronic diseases.

Most disadvantaged people share one thing in common with advantaged groups — they own smartphones. Eighty-one percent of the U.S. population today has a smartphone, and the overall number of users is rising. This offers an unprecedented opportunity to break down barriers and reach individuals where they are.

Through telemedicine, for example, minority doctors and nurses can serve members of their cultural group from all over the country. The same Latino man who may only visit a doctor under duress — and will then discount what the practitioner tells him — may be more open to getting advice through a video conference with a doctor or nurse who looks like him and shares his cultural background.

And because telemedicine professionals aren’t authorized to write prescriptions without an in-person consult in most cases, they may be more likely to work with the patient on making lifestyle changes and other drugless approaches to health and wellness. If the professional does recommend the patient see a prescribing doctor, that patient will be primed with a first opinion that may validate the second doctor’s diagnosis.

Mobile reminders are not a new idea when it comes to treating chronic illness, but there’s an opportunity to make them more personalized and more effective.

A study by NEJM Catalyst found that the top two ways to improve patient engagement are shared decision-making (54%) and having physicians, nurses, or other clinicians spend more time with patients (59%). Another study by the same group cited biometric devices (85%) and apps (75%) as the two most effective technologies for engaging patients. 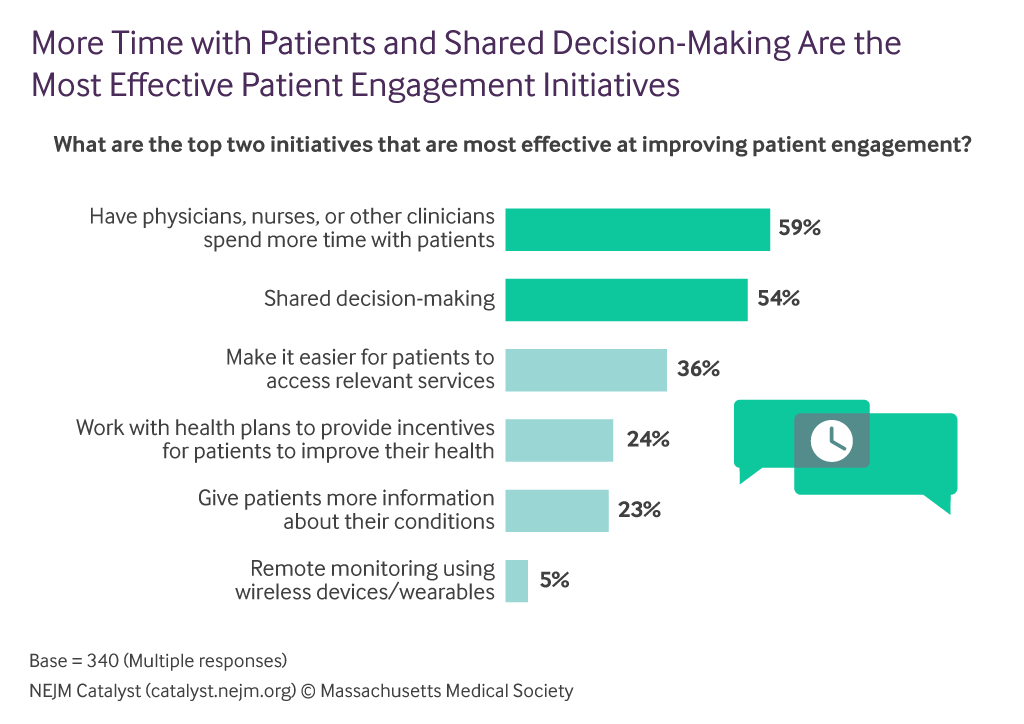 So instead of texting diabetics daily insulin reminders, which become easy to tune out over time, we should incorporate real-time health data from wearables so that patients will receive positive reinforcement when their glucose levels are on track and real-time advice if their levels go outside of the range. Continuous glucose monitoring systems can pair with a smartwatch to do this to some extent, but these systems don’t report to the patient’s medical doctor, making it incumbent on the patient to handle their own care. It’s a start, but the more data we can feed the patient’s doctors, the more they can be involved in day-to-day care.

If we’re going to address chronic disease, we need to apply both intrinsic and extrinsic motivators to engage patients in their own treatment, and mobile gamification and reminders offer a great way to do so, particularly as biometric sensors improve.

The third opportunity for addressing the trust gap is giving patients access to their own health data, ideally in their own language and in layman’s terms. Right now, one reason going to the doctor is so intimidating is because patients don’t understand their diagnoses and certainly don’t understand the context surrounding them. Doctors with good bedside manners will try to explain everything, but often a good deal is lost in translation and in the transition from the doctor’s office to home.

If a patient wants to receive a copy of their records after the visit, it often means a trip back to the doctor’s office, which can be difficult for low-income patients who have limited transportation and time off work.

Having secure access to their own health records on their mobile devices will give patients the context and information they need to make better decisions about their long-term care, especially if those records are explained in a way they can understand and act on.

Achieving this technology-driven approach to disease management will take a coordinated effort among health providers, technology companies, government professionals, and of course, the patients themselves.

We won’t know which approaches are the most effective until we start to employ them. The great news about technology is that we can leverage real-time data on how patients are complying, how their bodies are reacting, how their lifestyle decisions are triggering day-to-day issues, and so much more. We’ve never before had the opportunity to go beyond self-reported symptoms and treatment journals. As we get smarter about integrating mobile devices and wearables into patient care, we’ll be able to act and react much more quickly and knowledgeably to what’s happening with the patient.

It’s time to deploy modern techniques to solve the enormous health challenges facing our low-income populations. The exciting news is, there’s nothing standing in our way.

Rey Villar is the founding partner at HealthChampion, a leading consumer advocate specializing in healthcare solutions.  Rey is an accomplished digital marketer, growth hacker, and speaker specializing in digital and growth marketing strategies and tactics. Rey has extensive experience in the technology, fintech and healthcare markets and has worked to bring an uncommon blend of traditional and leading-edge marketing strategies to businesses throughout the country.