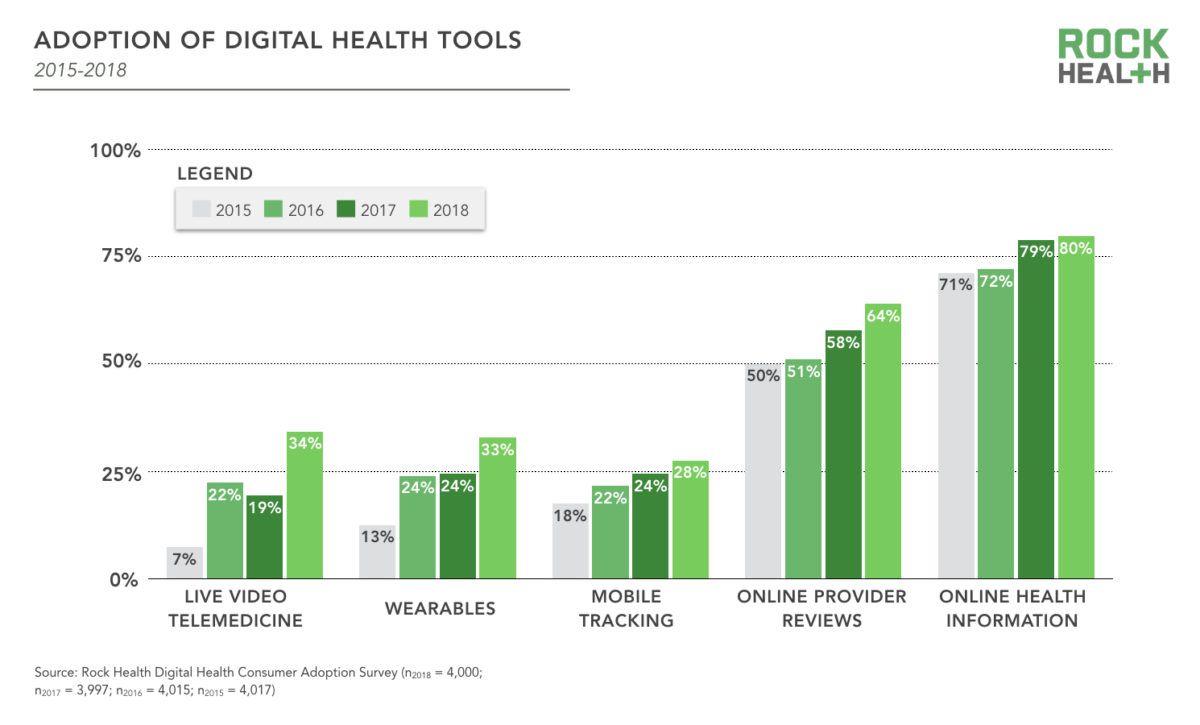 Adoption of digital health tools reached record heights in 2018, according to a recently released survey report from Rock Health. In fact, eighty-nine percent of respondents used at least one digital health tool—up from 80% in 2015. Live video telemedicine and wearable adoption rates surged following a pause in growth in 2017. Meanwhile, respondents were increasingly guarded about their personal health data—in 2018, respondents were less willing to share data with highly-trusted entities like providers and insurance companies compared to 2017.

The Digital Health Consumer Adoption 2018 survey report of 4k respondents of US adults age 18 and over. offers consumers’ use and perceptions of digital health over time The report reveals that for the first time consumers are adopting digital health tools not just out of curiosity or for general fitness and well-being—but with the intention to address concrete health needs.

1. Wearable use is shifting away from fitness toward managing health conditions

Monitoring physical activity remains the top reason for wearable use, but only 44% of wearable owners cited physical activity as the top reason for their wearable use, down from 54% in 2017. This 10% decrease is mirrored by a 10% increase in respondents using a wearable to manage a diagnosis. Wearables are morphing from their original fitness and wellness label into a tracker that can be clinically meaningful to patients—and perhaps even providers.

2. Telemedicine adoption is climbing, with urban consumers more than twice as likely to use live video telemedicine than rural consumers 3. Highly trusted entities like physicians and health plans lost credibility in 2018—consumers were less willing to share data with them than they were in 2017