HIMSS Workforce Survey reveals the lack of qualified health IT talent as the biggest challenge to hiring health IT professionals for healthcare providers.

With high demand for health IT workers projected to continue for the foreseeable future, the 2014 HIMSS Workforce Survey results find healthcare provider organizations are facing increasing challenges in hiring health IT professionals. A total of 200 individuals, including hospital and health IT executives and executives from health IT companies completed the 2014 survey. Data was collected via a web survey in May and June 2014. 85 percent of all respondents (92 percent of healthcare provider respondents and 74 percent of vendor respondents) claimed their organizations faced barriers in fully staffing their environments. 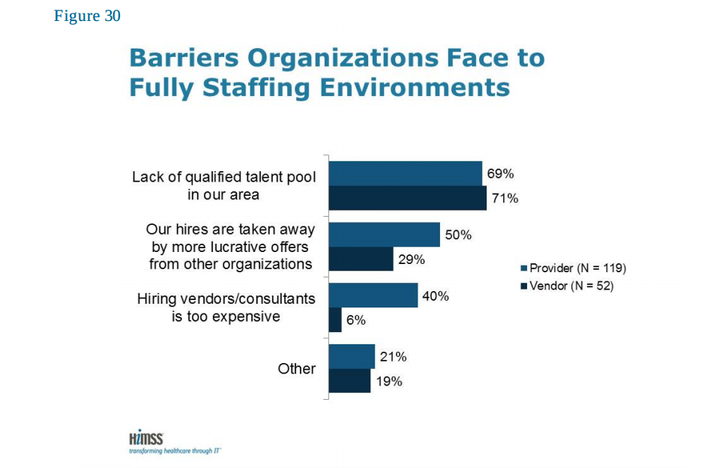 The lack of a qualified health IT talent pool in their area was cited as the biggest challenge to achieving a fully staffed environment (69 percent for providers; 71 percent for vendors). Half of respondents working for provider organizations indicated that hiring vendors/consultants was too expensive compared to only
six percent of vendor respondents. At least 19 percent of respondents working at vendor companies
and 21 percent of those working at healthcare provider organizations reported other barriers to fully
staffing their environments, such as budget and financial limitations.The results this year reflect a notable increase in the percentage of vendor organizations claiming the presence of barriers in achieving a fully staffed environment. In 2013, 57 percent of vendor respondents claimed their organization faced hiring barriers.

When respondents were asked two questions about the impact staffing shortages would have on IT initiatives, the report found:

– over one-third (36 percent) of provider respondents did not scale back any IT projects due to being short staffed, while approximately the same percentage (38 percent) claimed that they did have to scale back at least one IT project.

– An addition one-quarter (24 percent) of respondents noted that they had not scaled back an IT project but were considering doing so.

– Nearly one-third (30 percent) of healthcare provider respondents indicated that their organization had
both scaled back an IT project and had to put an IT initiative on hold due to staff shortages.

Staff Needed:  Clinical application support staff (58 percent) is the most sought-after position provider organizations plan to hire in the next year, an increase from 34 percent, as reported in the 2013 survey results.

IT Layoffs: Even though the reported hiring of, or plans to hire, IT staff are quite high, the findings point to a 5 percent increase in staff layoffs between 2013 (8 percent) and 2014 (13 percent).

A total of 200 individuals, including hospital and health IT executives and executives from health IT companies completed the 2014 survey. Data was collected via a web survey in May and June 2014. In comparison, the 2013 survey received 224 responses. Approximately two-thirds (65 percent) of survey respondents were employed by a healthcare provider organization with the remaining respondents representing a vendor organization (Figure 1). All respondents were based in the United States.