ONC-ACB surveillance activities and other feedback from the field show that although certified health IT is often conformant with the criteria to which it was certified, there is still a substantial amount of permissible variability in the underlying required standards, unique clinical workflow implementations, and numerous types of interfaces to connect multiple systems. This variability has contributed to information sharing challenges and also creates opportunities for developers or health IT implementers to erect unnecessary technical barriers to interoperability and electronic health information exchange.

Commercial software ‒ specific to the healthcare industry ‒ has taken years to mature and there are distinctly separate categories of EHR software. Two of the largest categories are Ambulatory and Inpatient. One could argue that the first and most successful vendor in this unique category of software called EHR is Epic Systems ‒ founded by Judy Faulkner (1979) and still privately held. Here’s a relatively recent breakdown of market share ‒ by vendor ‒ for both categories. 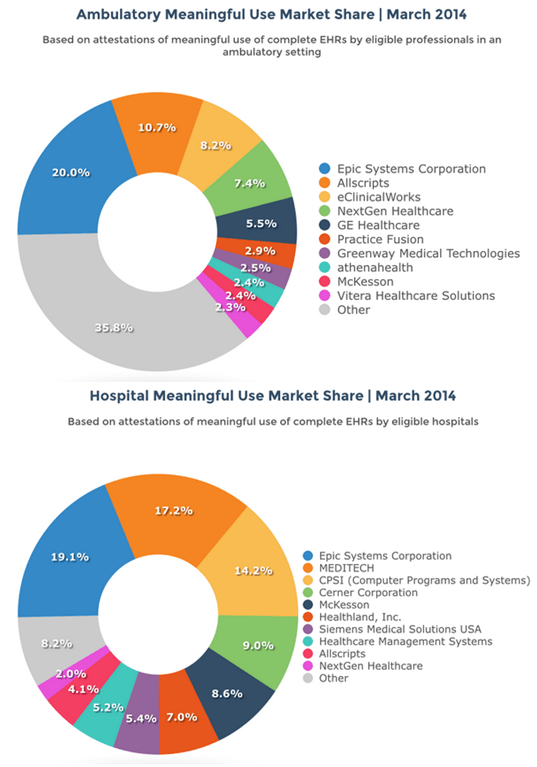 With a firm hold on 20% of both markets, Epic is the Apple (or Microsoft) of EHR software except that it remains privately held. Whether a software manufacturer is privately held ‒ or traded on the public market ‒ makes little difference to the way the business operates. The reality is that most of these EHR systems started (and largely remain) as enterprise billing engines ‒ that now include a fair amount of clinical data ‒ stored in proprietary formats. Anyone ‒ including ONC ‒ who argues that Independent Software Vendors (ISV’s) are obligated to build software connections (or API’s) into competing software solutions ‒ for free ‒ clearly don’t understand the way revenue is captured and reported to the IRS. They also don’t understand that ISV’s are beholden to shareholders as much (if not more) than their customers and their customers are not patients. They’re alignment to shareholders and customers is purely economic. We’ve supported this model to the tune of over 400 ISV’s that now offer “certified” EHR software to some customers ‒ almost entirely in proprietary formats based on each vendor’s commercial interests.

All of which begs the question. Absent any National Standards often used in other industries as a way to effectively neutralize all of these competing interests ‒ who is truly to blame? Congress for actively “blocking” the development of National Standards ‒ or ONC for lacking the technical ability to police an entire industry for “information blocking?”

But that’s also a serious charge. How is Congress actually “blocking” the development of National Standards in healthcare? For insight into that exact dilemma ‒ it’s important to link the release of ONC’s report with another headline from last week.

There’s that word again ‒ “block” ‒ only this time aimed squarely at Congress ‒ not the EHR ISV community. According to the article, the resulting damage from this one “block” has serious and direct patient consequences.

According to a survey of healthcare CIOs conducted by the College of Healthcare Information Management Executives, error rates due to patient mismatching averaged eight percent and ranged up to 20 percent.  In addition, 19 percent of the respondents indicated that their hospitals had experienced an adverse event during the course of the year due to a patient information mismatch.

The history to this one Congressional “block” goes back to the passage of HIPAA and I wrote about that history as a part of that 5‒part series on interoperability just over one year ago.