What You Should Know:

– Augmented reality surgical image guidance startup Augmedics raises $15M in Series B funding led by its U.S. staff in an effort to secure and successfully launch the company as venture capital (VC) all but evaporated during the COVID-19 pandemic.

– The xvision system, the first augmented reality guidance system for surgery, allows surgeons to see the patient’s anatomy through skin and tissue as if they have “x-ray vision,” and to accurately guide instruments and implants during spine procedures.

Augmedics, a Chicago-based provider of augmented reality surgical image guidance, has raised $15 million in Series B financing, led by its U.S. staff. In a nearly unprecedented move, the company’s employees formed limited liability company AUG Management LLC to raise $4 million in an effort to secure and successfully launch the company as venture capital (VC) all but evaporated during the COVID-19 pandemic.

Augmedics began Series B fundraising in the third quarter of 2019 with a goal to close the round by Q2 2020 after successful commercialization of its groundbreaking xvision Spine System, slated for Q1 2020. While seeking a lead VC, the company raised SAFE investments (simple agreement for future equity) to continue operations. It received several VC offers and was poised to make final investor decisions and sign term sheets in March, when the COVID-19 pandemic suddenly brought investor activity to a halt. That, compounded with a pause in elective procedures such as spine surgeries, led Augmedics to resort to creative measures in order to successfully launch its groundbreaking technology.

Inspired by success to date, the mission of the company, and the passion of the employees, Augmedics President and Chief Commercial Officer (CCO) Tim Murawski led an unusual effort to raise funds internally. Employees believed so strongly in the technology and the future of the business that they committed to securing the company and propelling its successful commercial launch. Together with their families, the 20 U.S. employees invested $4 million via AUG Management LLC. Existing shareholders, AO Invest and Terralab Ventures participated in the financing round with a $3.2M investment, and undisclosed investors converted the remaining $7.8 million SAFE notes.

“The dedication of our team and the leadership of President and CCO Tim Murawski is outdone only by the incredible innovation that they continue to demonstrate in the lab, in the field, and at the board table,” said Nissan Elimelech, founder, and CEO of Augmedics. “The amount of money that the Augmedics employees committed to continuing operations shows how much they believe in what we are doing – in the technology, the strategy and the leadership – even in these uncertain times.”

Each year there are approximately 1.62 million instrumented spinal procedures performed in the United States alone.  The majority of those are done using a freehand technique, which can lead to suboptimal outcomes, including up to 31 percent of freehand surgeries result in inaccurate screw positioning; neurological complications due to screw malposition in 2.3 percent of cases; and, up to three percent require reoperation within 30 days to reposition screws, creating the possibility of more surgical-related complications.

Surgical navigation systems significantly improve the outcomes, with more than 95 percent success rate as a result of better accuracy. They also cut screw insertion time by 50 percent and provide a 92 percent decrease in X-ray radiation.  However, only nine percent of spine surgeons routinely use them and 66 percent never do. This can be attributed to a number of factors: surgeons find them to be uncomfortable, and they do not meet surgeons’ expectations in terms of time efficiency, ease of use, and integration into the surgical workflow.  In addition, they distract surgeons from their patients by requiring them to look at a remote screen across the room or placed at the patient’s feet.

To address the unmet needs of surgeons, the xvision Spine System consists of a transparent near-eye-display headset and all elements of a traditional navigation system. It accurately determines the position of surgical tools, in real time, and a virtual trajectory is then superimposed on the patient’s CT data. In a minimally invasive procedure, the 3D navigation data is then projected onto the surgeon’s retina using the headset, allowing him or her to simultaneously look at the patient and see the navigation data without averting his or her eyes to a remote screen during the procedure. The system is designed to revolutionize how surgery is done by giving the surgeon better control and visualization, which may lead to easier, faster and safer surgeries. In a percutaneous cadaver study, the xvision Spine System demonstrated 98.9 percent screw placement accuracy.

Johns Hopkins University surgeons have completed the first surgery using an augmented reality surgical guidance system, the Augmedics xvision Spine System. During the procedure, the surgeons placed six screws in a patient’s spine for spinal fusion surgery to fuse three vertebrae in order to relieve the patient’s chronic, debilitating back pain. The surgery was the first to be performed in a live patient using the xvision Spine System, which allows surgeons to visualize the 3D spinal anatomy of a patient during surgery as if they had “x-ray vision,” and to accurately navigate instruments and implants while looking directly at the patient, rather than a remote screen.

In December, Augmedics announced U.S. Food and Drug Administration (FDA) 510(k) clearance and the U.S. launch of its xvision Spine system (XVS), the first AR guidance system to be used in surgery. xvision is now available for sale in the United States, with headset distribution underway. Augmedics plans to explore additional surgical applications for xvision beyond spinal surgery. The system’s small footprint, economical cost and compatibility with current instrumentation are designed to allow easy integration into any surgical facility nationwide. 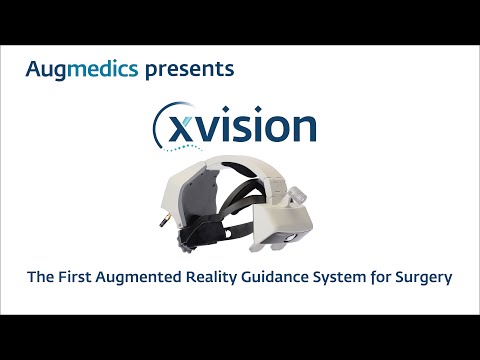