In this insight, we assess how the top US acute EHR vendors, namely Epic, Cerner, Allscripts and MEDITECH (+85% share of US acute market in terms of revenues), have progressed specifically on the third point, international expansion.

The below figure shows that there is a significant variance amongst the big four in terms of revenue and share of business outside the US. Cerner has by far the highest revenue at more than $600M in 2018, representing 12% of its business. Whilst MEDITECH has much lower revenues, its international business is broadly similar to a share of its total business. 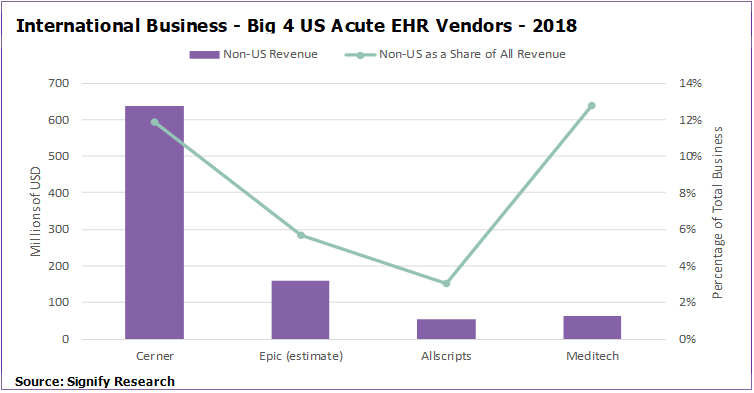 A deep dive for each vendor is provided below: 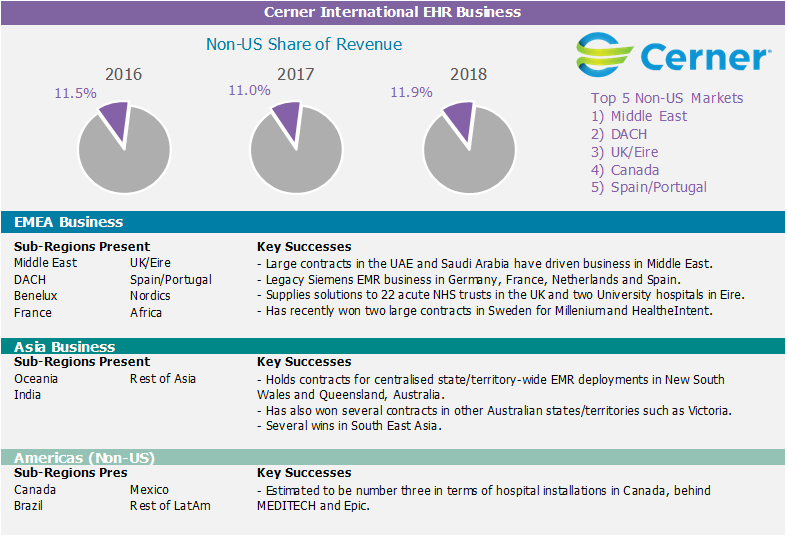 Cerner received a significant boost to its international business in 2015 when it acquired Siemens EHR business. This provided it with a broad footprint of deployments in DACH (Germany, Austria, Switzerland), Benelux, France, Norway, and Spain. However, most of these customers are still using the legacy Siemens’ EHR solutions and not Millennium.

Cerner has a substantial UK presence, in part owing to its legacy relationship with BT and the subsequent contracts given out under the largely failed NPfIT program. These customers do use Millennium and the company has grown this business in recent years. It is estimated to have an installed base of more than 20 trusts in the UK and has had success upscaling these contracts to include products such as HealtheIntent. It has also grown the number of acute trusts served. For example, in 2018 it won the contract with The Countess of Chester Hospital National Health Service Foundation Trust, previously using MEDITECH.

Elsewhere in Europe, Cerner expanded its Nordic business recently with large contracts in Region Skäne and Västra Götalandsregionen (both in Sweden) during 2018 and 2019. However, it will lose its Norwegian footprint to Epic which won the Helse Midt-Norge contract earlier this year (Cerner withdrew from bidding during 2018). The company has also seen success in the Middle East. In the UAE, it has large contracts with the Ministry of Health and Prevention (MOHAP) and Abu Dhabi Department of health (HAAD). In Asia Cerner has had success in Australia, winning state/territory-wide EHR contracts in both Queensland and New South Wales and also having success in other states/territories where procurement is decentralized.

Most of Cerner’s non-US business in the Americas is in Canada where approximately 100 hospitals are estimated to be using its solution. Here it faces competition from the other leading US vendors such as MEDITECH, Epic, Allscripts and also local vendor Telus.

In summary, Cerner has broadly made a success of its international business. It tops the market share table in several of its international geographies and it has done this while broadly maintaining the margins achieved with its US business. For the most part, it has also been able to grow the business it acquired from Siemens, although migrating these customers to Millennium has been slow. The challenge going forward will be to gain share in those regions where it is not yet market leader (DACH, Nordics, France) and carefully plan whether to enter those markets where it does not have a significant presence (e.g. China, Eastern Europe, Latin America). Given the low revenues per bed in these regions, increasing share within its existing footprint may be the more fruitful of the two. 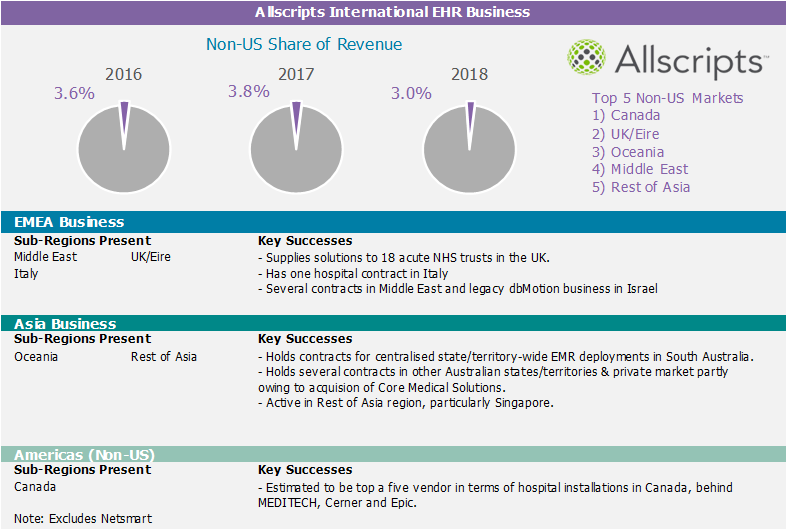 Allscripts’ international revenues fell in real terms and as a share of overall business in 2018. This was partly due to acquisitions (e.g. McKesson EIS, Practice Fusion) which mostly added US revenues, and to some extent currency movements. Canada has historically been its largest market outside the US accounting for just under a third of its non-US business, although the UK and Australia are estimated to now be broadly similar in size. In Canada, it’s a top five player, but lagging some way behind MEDITECH, Cerner, and Epic in terms of hospital installs.

In the UK it serves 17 acute trusts (only Cerner, DXC and SystemC are estimated to serve more) and will soon increase this number to 18 with the addition of Gloucestershire Hospitals NHS Foundation Trust, a contract it won from InterSystems in May. Much of the company’s UK footprint was built from its acquisition of Oasis Medical Solutions five years ago. However, it has slowly built on this foundation adding new acute trust customers and upgrading many from the legacy Oasis PAS solution to Sunrise and other Allscripts’ solutions such as dbMotion – although perhaps at a slower rate than hoped.

Its entry into the Australian market was also largely via acquisition (Core Medical Solutions in 2016). Core Medical Solutions was a leading player in the smaller hospital and private hospital markets in Australia. Allscripts has added to this legacy with a state-wide Sunrise EHR contract in South Australia (although deployment has not been without its challenges) and has had success selling its Sunrise solution outside of this state-wide contract (e.g. Gippsland Health Alliance in Victoria in 2018).

At just 3.0% of revenues in 2018, international is still relatively niche business for Allscripts. To some extent the company needs to decide where it wants to take this business. Relying on organic growth in the regions it currently serves is unlikely to move the dial far from this 3.0% figure over the next five years. The significant change is likely only via acquisition, something the company has not shied from in the past. However, should it focus on cementing its position in existing markets or expansion into new? Given it is not a top three vendor in any of its current geographies outside the US, acquisition to cement its position in existing markets; and leveraging its existing support, project management in system integration resources in those markets would make more sense than further expansion into new geographies. 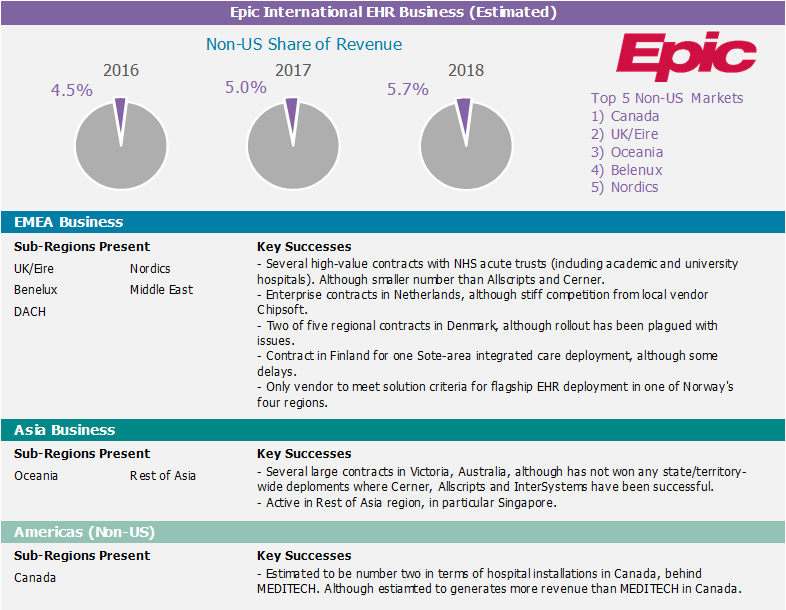 Historically, there have been two major points of entry into new geography for EHR vendors; either through a partnership to gain expertise and ‘localize’ a solution or through the acquisition of a local vendor (as with Cerner and Allscripts earlier). Both have their challenges, with partnerships often being slow to progress and acquisition often resulting in the long-term support of a legacy solution (e.g. Cerner is still supporting several legacy Siemens EHR solutions nearly five years after announcing its acquisition plans and most of Allscripts’ UK customers are not using Sunrise).

Examples where vendors have taken on large regional projects without sufficient ‘localization’, have often resulted in projects not meeting expectations and negatively affecting both vendors and providers alike. To some extent, Epic has suffered from this with several of its non-US deployments, in particular in the UK (e.g. Cambridge University Hospitals in 2015) and more recently in Denmark (regional contracts in the Zealand region and Capital Region) and Finland (regional contract in the Apotti Region). Epic has not made acquisitions to enter its international markets and in all these examples EHR implementations have not met expectations and have either had to be scaled back, delayed or required a significant amount of remedial action. The main criticism is often not enough ‘localization’ before deployment. That said Epic has had success elsewhere internationally, with less controversy surrounding its deployments in DACH, Netherlands, Middle East, and Singapore. In Canada, it is estimated to be the market leader in terms of revenues and second only to MEDITECH in terms of hospital deployments.

Epic has increased its focus on international expansion in recent years with incremental increases in revenue. However, it needs to improve on implementation/execution or future opportunities may be limited.  The fact it was the only vendor to hit the preselection criteria in Norway for the Helse Midt-Norge contract suggests that progress has perhaps been made on this front. 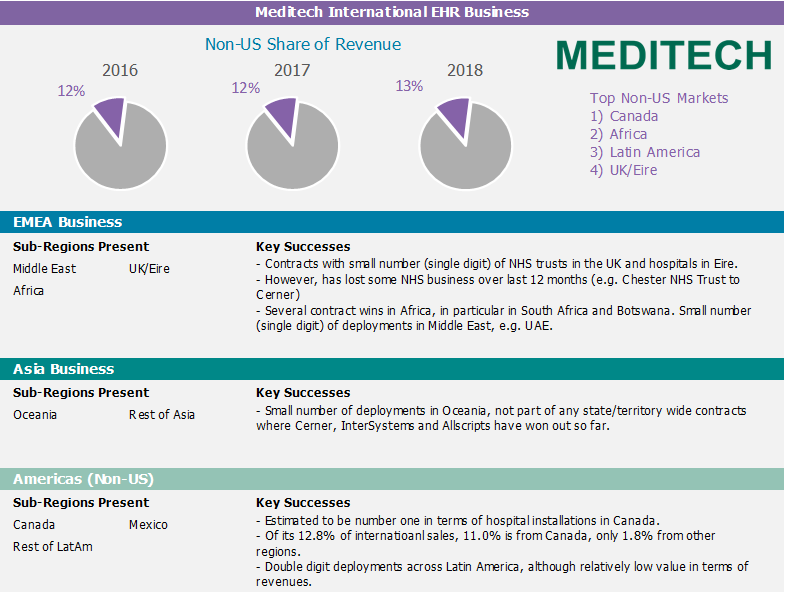 At 13% of 2018 revenue, MEDITECH had the highest proportion of non-US sales of all the vendors analyzed in this insight, and unlike Cerner and Allscripts, this share has consistently increased over the last two years. However, the overwhelming majority of this was from Canada. Of approximately $60M in non-US sales in 2018, nearly $50M is estimated to have been from Canada where it is estimated to be the market leader in terms of the number of hospital installs (although in terms of revenues it is smaller than both Epic and Cerner).

Approximately 2% of MEDITECH’s business comes from outside North America. As with Epic, Cerner, and Allscripts, a significant proportion of its non-American business is in other English-speaking countries, such as the UK, Ireland, South Africa, and Australia. In the UK it’s a second-tier vendor providing EHR solutions to a small number of NHS trusts (low double-digit). Despite a concerted push into the UK, with the acquisition of Centennial (its UK distributor and system integrator) and the official formation of MEDITECH UK in 2018, the number of trusts served has decreased recently with Cerner taking Chester NHS Trust from MEDITECH in 2018.

The company has had considerable success in Africa, selling solutions in 12 countries including Botswana, Namibia, South Africa, Zimbabwe, Kenya, and Uganda. Contracts in Kuwait, Saudi Arabia, and the UAE result in the whole MEA region accounting for a sizable share of its non-North American business.

MEDITECH’s international business mirrors its US business to some extent. It has one of the largest installed bases of hospitals worldwide, but predominantly small hospitals, and often in countries where spend per bed is low; it is also typically not upselling beyond core EHR, meaning that its international revenues, particular when Canada is excluded, remain small.

In Signify Research’s just published report on the global EHR market, it was estimated that the US accounted for nearly two-thirds of global EHR sales in 2018, so for these four vendors it still has to be the priority. However, the US is forecast to be one of the slowest growing EHR markets over the next five years as it approaches saturation, particularly for core-EHR products in the acute market. Further, the acute market in the US has now broadly consolidated around these four vendors meaning opportunities for gains in share through replacement is increasingly rare – the long tail has gone.

The geographic expansion offers a potential avenue to drive growth. However, it is not easy and there are plenty of pitfalls. Localizing solutions, acquiring local vendors, displacing local incumbents, aligning products to match government requirements and projects and putting in place local implementation, project management and support teams all requires significant time and investment. Because of this, the global market remains highly fragmented and market share change is slow. However, for the big four discussed in this insight, ignoring the international opportunity will significantly limit long-term growth; so despite slow and sometimes painful progress, we expect it to remain a priority. 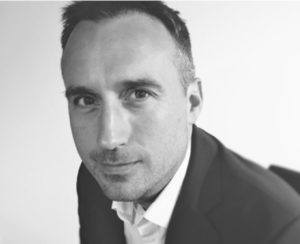