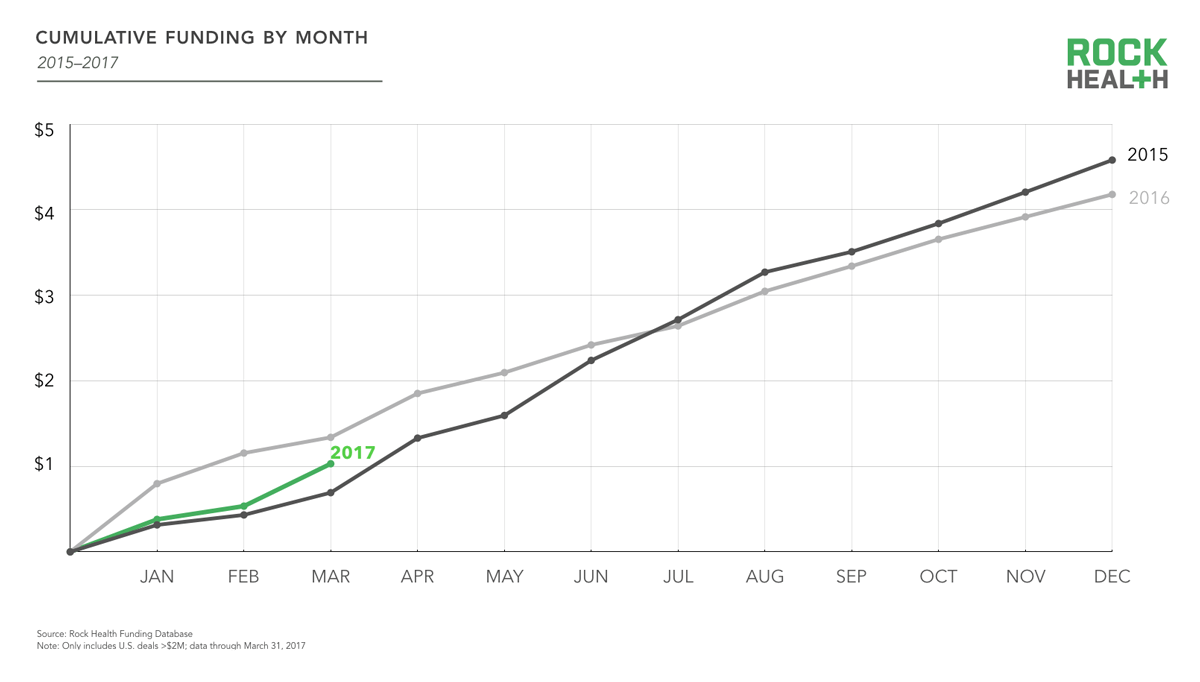 Digital health funding reached over $1B across a total of 71 digital health deals in Q1 2017(49% above Q1 2015 and 23% below Q1 2016),  according to Rock Health, a full-service venture fund dedicated to digital health. In a blog post, Rock Health reveals that despite any regulatory uncertainty around the repeal of the Affordable Care Act (ACA), it’s been business as usual for digital health funding. Providers and health plans are delaying expenditures based on this uncertainty, yet founders remain cautiously optimistic and well-prepared to navigate the changing healthcare landscape.

Key finding of the report include:

-The top six themes with the most deals per category received nearly half of the $1B+ invested in digital health: analytics and big data, care coordination, telemedicine, hospital administration, digital therapies, and wearables and biosensing.

-Nearly 20 digital health acquisitions occurred in Q1 2017. The two most notable deals are CoverMyMeds (acquired by McKesson for $1.1B) and Jiff (acquired by Castlight Health),

– The Digital Health Public Index (unweighted) is up 13% since the beginning of the year, with a majority of the companies generating a positive return over the quarter. The biggest digital health stock surge of Q1 was Teladoc, now trading at an all-time high (partly attributed to their March 1st earnings announcement that revenue was up 65.5% YoY).

It is important to note that Rock Health’s digital health funding reports only includes disclosed US deals over $2M. and companies that are sector-agnostic with a healthcare vertical are excluded. Expect these numbers to vary in comparison to StartUp Health and others as we report on digital health funding trends.