Ninety percent of a solution is accurately defining the problem, however, in healthcare, much like nearly every other industry, more time and energy is spent on fixing perceived symptoms rather than identifying root caU.S.es.

Today we will explore the contribution that applied analytics has made and continues to make on bending the dramatic U.S. healthcare cost curve. To do this well we will first explore the primary cost drivers (i.e. root caU.S.es), as to why the U.S. spends more on care than any other country on the planet yet we experience worse health outcomes and hold a lower life expectancy than most. 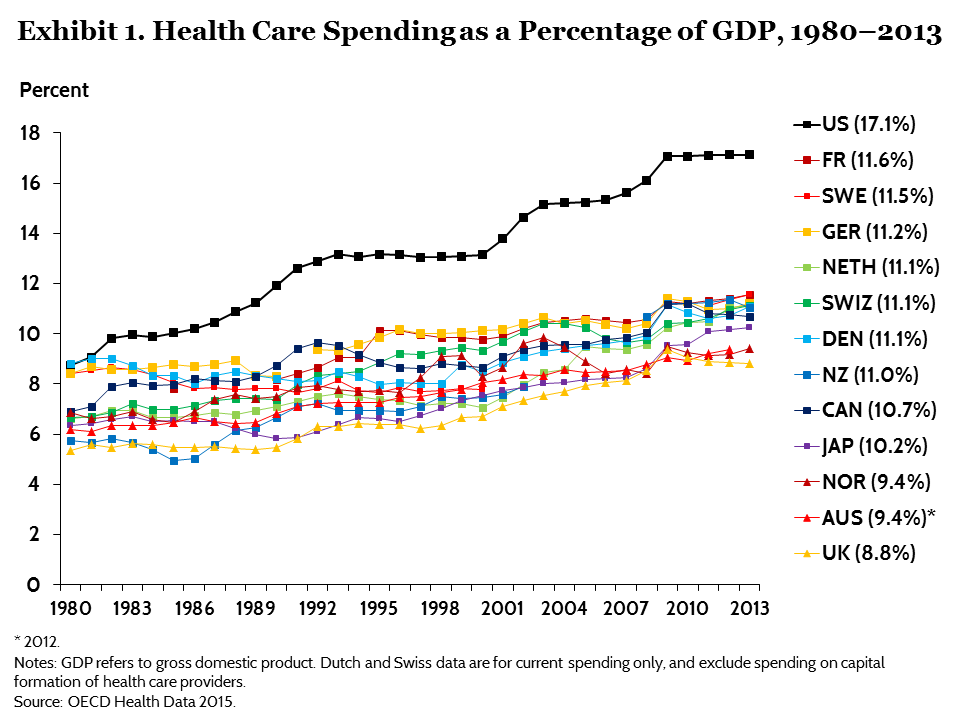 According to the Centers for Medicare and Medicaid Services (CMS), National Health Expenditure (NHE) projections, private health insurance covered approximately 200.1 million individuals at a cost of $1.2 trillion in 2017. To most of the U.S., this is not news, the astronomical costs of U.S. healthcare are no secret. But the question now is why? And what can we do about it?

Breaking down the factors that go into these costs, Debt.org describes these costs drivers as follows:

“There is no standard system that determines what hospital charges for a specific service or procedure. Many factors figure into hospital pricing, including an individual’s health circumstances, the cost of lab tests, X-rays, surgical procedures, operating room, and post-surgical costs, medications, and doctors’ and specialists’ fees.

“Additionally, hospital costs vary considerably depending upon where a hospital is situated and who is paying the bill (the patient, an insurance company or a government program such as Medicare or Medicaid.)

“In short, no two hospitals are likely to be the same. Regardless of a hospital’s published fee schedules for a service or procedure, the best information that a prospective patient can receive is a good-faith estimate. Until the bill is processed, there is no reliable way to assess a patient’s final hospital costs.”

Almost immediately we can see where health data analytics can make a huge impact on pricing and planning for prospective care needs.  In fact, predictive analytics are already being used to determine likely costs of a given patient, based on spending history, prescription drug coverage, age, and gender. For example, a recent report from the Society of Actuaries (SOA) states that a mere 17% of members included in the Healthcare Cost Institute (HCCI) Database are responsible for nearly 75% of all healthcare expenditures!

Accurately determining the populations most likely to generate the most care costs is key to effective preventative care initiatives, keeping people healthier longer and away from costly acute medical episodes.

Another Health Affairs study of physicians and physician practice administrators found physicians spend around three hours per week interacting with health plans, medical support staff spend 19 hours per week per physician, and 36 administrator hours per week per physician, in other words, the time costs are estimated to be upwards of $68,000 annually per physician. For U.S. healthcare, the national time-cost to practices’ interactions with health plans is between $23 billion to $31 billion each year. (All told, administrative costs make up about 15% of all healthcare expenditures — well over $300 billion annually, according to the 2016 index report from the California Association for Healthcare Quality.

While most don’t associate “analytics” as part of the solution to reducing administrative costs when it comes to U.S. healthcare, at nThrive we’re finding a strong correlation between knowledge and revenue cycle time. In other words, to the extent that accurate and sensible information about the provided care and associated costs is available to all parties – from payors to patients – the less time is needed to negotiate charges per patient, episode and per payor (private health insurance, Medicare, and Medicaid, etc.).

The same holds true when the payor is the patient. The more the patient “owns” (i.e. takes responsibility for, his/her own health status), the more s/he will be willing to pay for services provided.  In other words, better understanding the upfront costs of care will naturally create an environment more conducive to payment. Here’s an analogy contrasting taxi service to an Uber™ experience:

Taxis are sometimes hard to find, stressful to use (especially as you watch the meter go up and up while sitting in traffic!), paid for after the service is completed and based on a service price not determined or influenced by you – whether you liked the service or not – which requires immediate payment.

Contrast that with the Uber experience where the cost is predetermined, the service – at least as far as navigation – is clear, the option to tip is at your discretion, and exchange of payment is electronic once the service is completed.  The conversation with your driver might get strange at times, but overall it’s a great experience!

U.S. healthcare, unfortunately, is more like a taxi than an Uber.  We don’t really know the exact questions to find the best place for care (i.e. good care is hard to find).  We get charged for staying in the hospital and for services provided whether we want them or not, they’re necessary or not and regardless of whether they were good or not. If your nurse is rude to you, you pay the same price as you would if you had the best nurse on staff.  Finally, you don’t get the bill until the care has been provided and typically you get multiple bills for service!

It is self-evident how meaningfully applied analytics will have a huge impact on reducing administrative costs and improving patient payment expectations –further reducing the cost of care as hospitals write off fewer charges.

U.S. physicians are paid, on average, more than $250,000 a year (even after malpractice insurance and other expenses) above comparable medical services in other wealthy countries. In other words, our 900,000 doctors cost approximately an extra $100 billion a year in salaries, roughly $700 per U.S. household per year.

According to the afore-referenced Politico article:

“There are two parts to the high pay received by our doctors relative to doctors elsewhere, both connected to the same cause. The first is that our doctors get higher pay in every category of medical practice, including general practitioner. If we compare our cardiologists to cardiologists in Europe or Canada, our heart doctors earn a substantial premium. The same is true of our neurologists, surgeons, and every other category of medical specialization. […]

“The other reason that our physicians earn so much more is that roughly two-thirds are specialists. This contrasts with the situation in other countries, where roughly two-thirds of doctors are general practitioners. This means we are paying specialists’ wages for many tasks that elsewhere are performed by general practitioners. Since there is little evidence of systematically better outcomes in the United States, the increased use of specialists does not appear to be driven by medical necessity.”

In the 90’s it was thought that specialists provide better care and in one breast cancer study, it was found that women treated by specialists saw an 18% reduction in mortality. But recent studies have been mixed and, if anything, are trending away from high specialization in favor of more primary-care centric care orientations.

As greater insight becomes available through deeper and broader analytics, the age-old question of “when is it appropriate to be seen by a specialist?” will become clearer.  For the time being, we’ll have to suffice with the non-scientific “not as often as you think” for an answer. In this context, applying strong analytics to determine the appropriate course of care will result in a less realized cost to the consumer, as well as potentially reducing the need for extensive medical specialization in medical schools.  More doctors practicing medicine, as opposed to unnecessary training, will further reduce the costs of U.S. care. 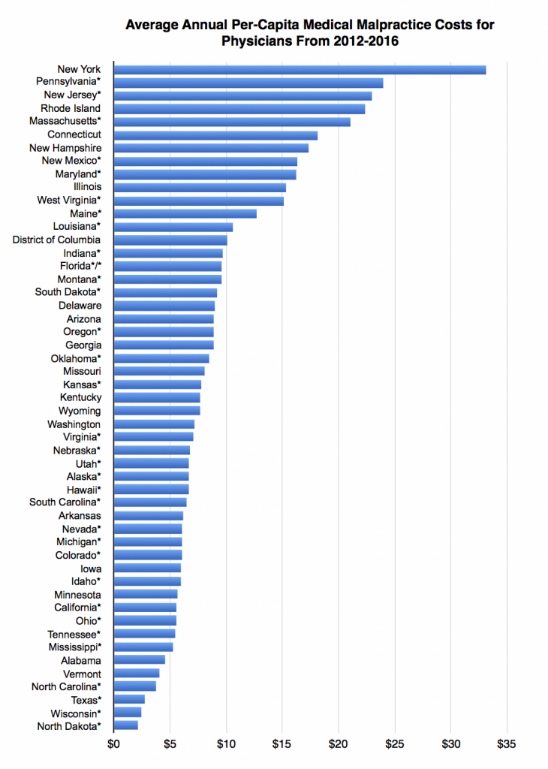 Further study is required on the impact of malpractice insurance on U.S. care costs, but in a future where patients are receiving the right care by the right people at the right facility (or home) at the right time, medical malpractice will become a more nominal aspect of the care equation.

Investments in Analytics are Up!

A recent survey by Damo Consulting on “Healthcare IT Demand in 2018” showed that value-based care initiatives accounted for more than 60% of U.S. healthcare technology investments by providers in 2018.  Of those investments, data and analytics accounted for 76%! In layman’s terms, our industry has turned the page on siloed patient data and we’re on the verge of an improved healthcare renaissance.

An article in FierceHealthcare highlights a few examples of where analytics are changing the way we practice medicine with great results.  The following are two examples from vastly different markets and two distinct goals:

“It’s very seductive,” Michael Kanter, M.D., executive vice president of quality and chief quality officer of the Permanente Federation, told Hospitals & Health Networks. “But it’s one thing to predict the future and a whole other thing to change it.” (source link unavailable)

Today, healthcare analytics and greater data capture have positioned the United States to theorize, identify and now implement best practices across a patient’s care continuum.  From cradle to grave – actually, from prenatal stages through genetically linked progeny! – we can see, analyze and map improvement in nearly every area of care. This is a very exciting time to be in healthcare!

An example of where small changes can have a significant impact on the cost of care, according to U.S. News & World Report, South Carolina’s Beaufort Memorial Hospital found that it could save an estimated $435,000 annually by discharging patients just a half-day early.

In Minnesota, the Department of Health discovered there were 1.3 million unnecessary trips to hospitals and ERs in the state every year – at a cost of some $2 billion – and were then able to work with healthcare providers to ensure individuals were getting care in a more appropriate setting.

The road to more affordable, higher quality healthcare is not yet paved, but recent investments in health information technology, improved coding practices, and now stronger and broader analytics have begun to bend the cost curve and are promising to deliver to a level of excellence we know we can achieve in the United States.

Moshe Starkman is the Senior Director, Value-Based Reimbursement at nThrive, specializing in value-based reimbursements with an emphasis on MACRA and bundled payments.  He has over 20 years of experience as a software architect and has developed solutions for several medical societies, the United States Postal Service, a team of former FBI investigators, and two leading presidential campaigns.  Between his knowledge of the industry and his technology savvy, Moshe is a sought-after leader in the transition to value-driven health care throughout the U.S.