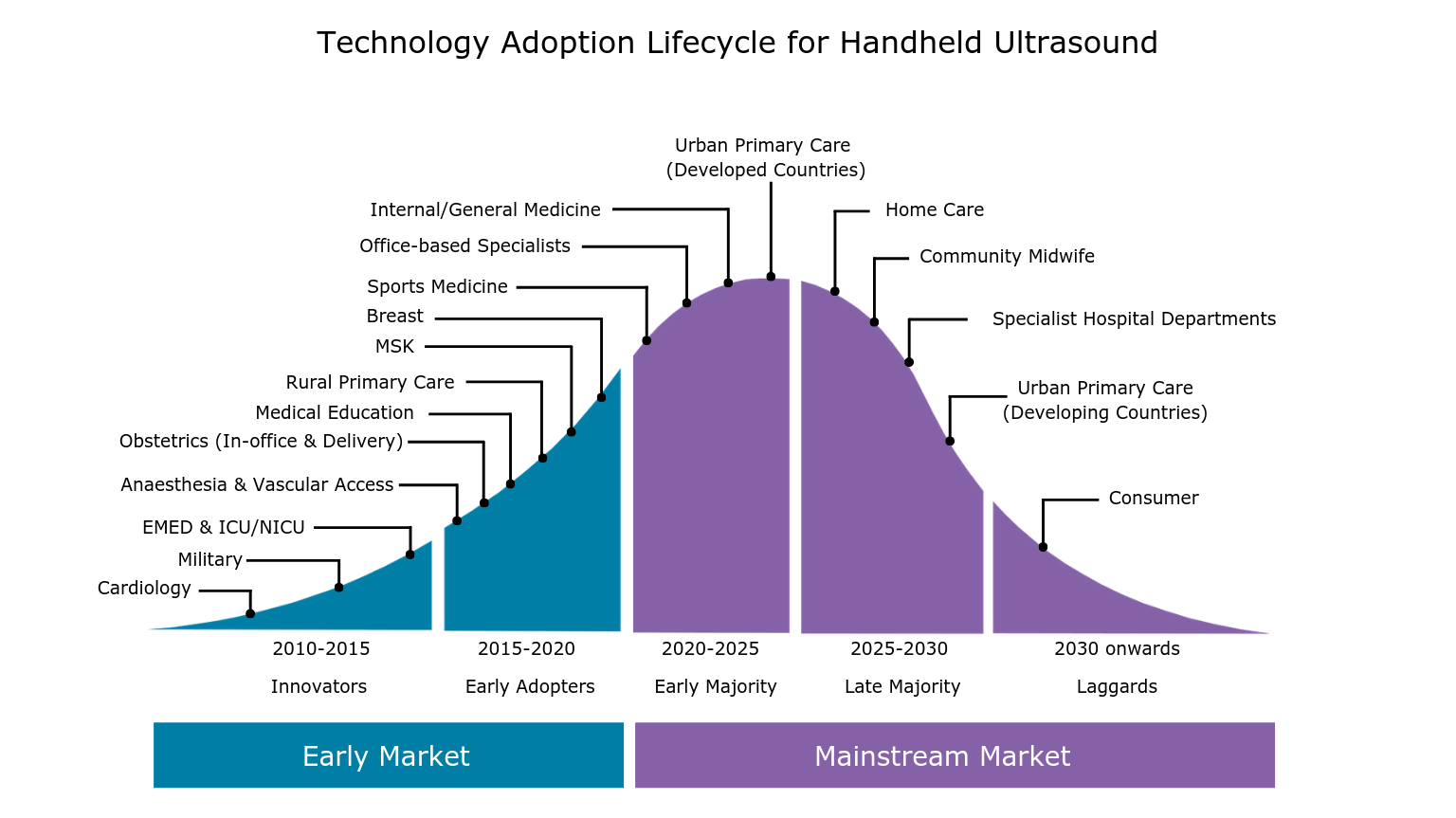 This year marks the tenth anniversary of the launch of the first handheld ultrasound scanner, GE Healthcare’s Vscan, yet the market has largely failed to live up to expectations. In 2018, sales of handheld ultrasound accounted for less than 2% of the $6.9 billion global markets for ultrasound equipment. The relatively high cost and limited performance of early generation handhelds were limiting factors. Steady product improvements over the years, coupled with fresh innovation from new market entrants, are beginning to unlock the full value of handheld ultrasound, both for experienced and new users alike.

Cardiologists were some of the early adopters of handheld ultrasound, where the devices found a role as initial screening tools in clinics, at the bedside during ward-rounds and in the interventional suite. Other early users were emergency medicine physicians, particularly those in emergency medical services, intensivists in critical care units and the military. Subsequently, handheld ultrasound has gained a degree of acceptance in procedural ultrasound, including vascular access and anesthesia, and more recently MSK specialists have started using it for in-office exams, for intraoperative imaging, and in field medicine.

Emergency medicine was the largest market for handheld ultrasound in 2018, worth around $15 million. However, this represented only 10% of the total sales that year of ultrasound systems for use in emergency medicine, with compact and cart-based systems accounting for the lion’s share of the market. The same is true for the other point-of-care ultrasound (POCUS) specialties. While handhelds are forecast to gain market share in the coming years, compact systems and, to a lesser extent, cart-based systems are expected to remain the preferred form factors.

In addition to the expanding use of handheld ultrasound in traditional POCUS markets, demand is being boosted by office-based physicians in various medical specialties, such as urology, gastroenterology and vascular. In-office specialists are using handheld ultrasound for quick exams and for initial screening, typically as an adjunct to the more powerful cart-based systems in their hospital departments.

The expanding customer base, coupled with the increased availability of affordable handheld scanners, is forecast to boost global sales of handheld ultrasound by over 50% in 2019.

However, the increasing use of ultrasound beyond the hospital comes with challenges. Firstly, there is limited reimbursement available in most countries and even where it is available, office-based physicians typically do not have reporting processes in place to ensure exams are compliant with billing requirements. Moreover, credentialing, data security and quality assurance (both for image capture and interpretation) can be challenging. While handheld ultrasound devices may be ready for mainstream adoption, many institutions lack the IT infrastructure required to provide seamless patient care between the office and hospital settings. These challenges must be properly addressed and overcome to ensure the quality of care and for the handheld ultrasound to realize its full potential.

The price of handheld scanners has come down considerably in the last couple of years and they are now a cost-effective option for many primary care physicians. For example, Butterfly Network began shipping its Butterfly iQ scanner towards the end of 2018 at the headline price of $1,999 (plus annual subscription of $420). In response, GE Healthcare cut the price of the basic version of Vscan Extend to $2,995 (currently US only). While the price is becoming less of an issue, many primary care physicians lack formal ultrasound training and reimbursement is not widely available. In many European countries, general practitioners must be certified to receive reimbursement for performing ultrasound scans.

To address the lack of skills issue, vendors of handheld scanners are striving to simplify ease-of-use, both in terms of the device itself and integrated tele-ultrasound services that connect novice users with experts at separate locations over two-way audio and video calls. The latest generation of handheld scanners feature numerous presets for common exam types and artificial intelligence (AI) is being applied to enable physicians with no prior scanning experience to capture high-quality images. AI-guided ultrasound will help users to identify body parts and correctly position the transducer to maximize the image quality for a given exam. Moving forward, AI will also play an increasingly important role in image interpretation, providing physicians with automated measurements, anomaly detection, and diagnostic decision support.

The use of AI in ultrasound is at an early stage and the first solutions are now coming to market. These are point solutions that support the interpretation of specific exam types, e.g. automated ejection fraction calculation for cardiac assessments. In the near future, we expect to see AI solutions with broader functionality that can support in the detection and diagnosis of multiple conditions for a body area. In parallel, the first handheld scanners with AI to support during the image acquisition process are expected to hit the market in the next year or two. The advent of smart devices with AI for both image acquisition and interpretation will be the catalyst for the more widespread use of handheld ultrasound, both in primary and multiple other care settings. By 2023, the global market for handheld ultrasound is forecast to exceed $400 million.

Simon Harris is the Managing Director at Signify Research, a UK-based market research firm focusing on health IT, digital health, and medical imaging. Simon has 23 years of experience in technology market intelligence, having served as Executive Vice President at IMS Research and Senior Research Director for IHS Inc.’s Technology division.