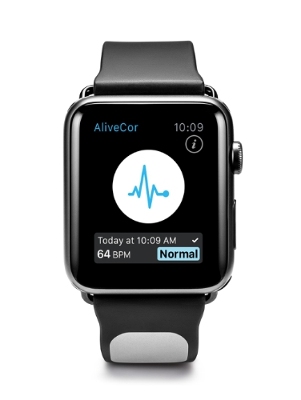 Users can record a single-lead EKG by simply touching Kardia Band’s integrated sensor that communicates with the Watch app, Kardia by AliveCor™.  The Atrial Fibrillation (AF) Detector then uses Kardia’s automated analysis process (algorithm) to instantly detect the presence of AF in an EKG, the most common cardiac arrhythmia and a leading cause of stroke. Also included is the Normal Detector, which indicates whether your heart rate and rhythm are normal, and the Unreadable Detector, which tells you when to retake an EKG so physicians receive only the highest quality recordings.

Users can also record voice memos on their Apple Watch to accompany each EKG that give doctors and caregivers a clearer picture of what was happening at the time of the recording — describing symptoms such as palpitations or external factors like caffeine intake. Kardia also integrates seamlessly with Apple’s Health app to include EKG data with steps and calorie intake to provide richer, personal analysis over time.

“The personal, discrete Kardia Band is a perfect fit for Apple Watch. It allows patients to easily measure and record their heart rhythm in real time. This can provide patients with a sense of control—which is vitally important to successful patient engagement in the treatment of chronic disease,” said Kevin R. Campbell, MD, FACC, North Carolina Heart and Vascular UNC Healthcare, clinical cardiac electrophysiology assistant professor, UNC Department of Medicine, Division of Cardiology, and President, K-Roc Consulting, LLC in the press release.

Kardia Band is designed for anyone who wants to learn more about their health in addition to people with AF, and doctors who want to bring the latest in proactive heart health technology to their patients and practices.  Kardia Band provides caregivers the opportunity to take a more active role in helping their loved one engage in their own care. The Kardia Band is pending 510k clearance and is not currently for sale in the U.S.

AliveCor has re-introduced its first device, the AliveCor Mobile ECG, has rebranded under the new Kardia brand name as Kardia™ Mobile. AliveCor hopes the rebranding will make the name Kardia synonymous with proactive heart health. Currently, Kardia Mobile works with iPhone, iPad and iPod touch, and most Android OS. The new Kardia app is available now for download for iOS and Android users.