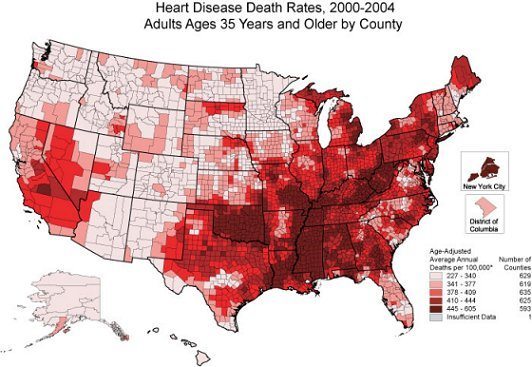 More modern disease map showing deaths from heart disease among white males in the US from 2000–2004. (Wikipedia)

Editor’s Note: Brittni Brown is a current Masters candidate at the University of Idaho.

There is no doubt that technology has made a significant impact in the medical world. Advancements range from those that improve the comfort of many patients to those that extend their lives. Perhaps one of the most interesting technologies that has emerged onto the scene is one meant to more efficiently address geographical links to illnesses: geographic information systems, or GIS.

Geographic information systems are a sophisticated form of mapping software that enables users to visually display input data associated with a designated project. Displaying data visually allows users to see geographical groupings of patient demographic data in a new way. Furthermore, the program allows users to run statistical tests and answer ‘what if’ questions that can arise as a result of direct or indirect changes that take place.

Here are five potential benefits of integrating geographic information systems in healthcare IT:

The software offers healthcare professionals the ability to identify health related trends and more thoroughly target healing efforts based upon those results. One example of this in action comes from the University of Southern California’s Public Health Program, which utilizes geographic information systems in many of its different initiatives, including the Cancer Surveillance Program.

The program assess the demographic data, such as home address, workplace, cancer type, and even data collected from wearable health tech of all patients entered into the system. Data is then georeferenced and mapped. Healthcare professionals can visualize the locations of patients and determine if there are clusters of specific types of cancer associated with similar working conditions or residential areas. One USC study found an association between homes downwind of heavily sprayed fields and higher incidences of prostate cancer.

With the number of chronic diseases such as cancer, diabetes, and cardiovascular disease rising rapidly, GIS may provide a method in which healthcare professionals can systematically address where certain diseases are more likely to or already have become prevalent and begin proactively implementing preventative strategies or staffing healthcare professionals skilled in specific medical specialties.

2. Tracking the Spread of Infectious Disease

The role of GIS systems should not be limited simply to tracking occurrences of diseases though. One of its most powerful aspects is its ability to use geography and other inputs to identify where diseases are most likely to spread next. Data such as this can be essential to on-the-ground personnel working to save lives because it enables them to prepare in advance for a disease and can severely limit the impact.

Maps such as these are beginning to play a significant role in the management of disease outbreaks such as Ebola and measles. For instance, during the Disneyland measles outbreak in December of 2014, GIS-based maps were created to help visualize where infected children lived and the potential spread of the disease. Furthermore, it was used to gain a better understanding of vaccination rates and laws in differing counties throughout the US to determine which locations could be hit the hardest given a serious outbreak.

The collection of large quantities of accurate personal data is expected to reveal a great deal about personalized healthcare, but it can also greatly impact broad regional treatment plans. Personal healthcare technologies represent a powerful tool for information input into GIS due to their ability to inform statistical studies. It has the potential to uncover long-term geographic trends in the health of certain demographics of people or of individuals living within certain regions of the United States.

Wearable technology is capable of collecting a very broad amount of healthcare information such as average heart rate, sleeping patterns, and exposure to the sun. Adding this data to a GIS could help determine if the average heart rate or sleeping patterns of individuals varies over geographic areas. If such patterns do exist, discovering why could open new realms of healthcare research.

In a similar manner to wearable tech that can be used to gather input data, social media can also play a significant role. For instance, during the 2012-2013 flu season, researchers queried Twitter for tweets indicating sickness. They used terms such as ‘flu,’ ‘influenza,’ and ‘medication’ and geographically located where the tweet was sent from. By adding this data to a GIS map, researchers were able to visualize the status of the flu in the US for that year. Additional studies and data collection hope to predict where the flu will have the greatest effect into the future.

Finally, the use of GIS technology can enable community leaders and developers to work more closely with hospitals to take larger steps in addressing national healthcare needs. The system can help identify which neighborhoods are in greater need of specific health services such as more rehab centers or senior care facilities. Analysis of patient demographic data can help answer these questions.

An example of how this has been done is through veteran’s service improvements. The Planning Systems Support Group, a field unit in the Veteran’s Affairs office, used GIS to determine where there were significant gaps in their service. They did so by mapping the known distribution of veterans in the United States alongside the distribution of veteran service offices and healthcare facilities. The maps revealed a number of areas where veterans were forced to travel significant distances to receive treatment and, using the data, were able to successfully lobby for 20 new mobile veteran care stations across the US.

GIS is a powerful tool that has been successfully implemented to help address a number of significant health issues ranging from disease management to improved services. As more and more healthcare professionals begin to adopt and integrate the program the number of benefits is likely to continue to rise including the connectivity between hospitals and the communities they serve – which is perhaps the most important connection to be made.