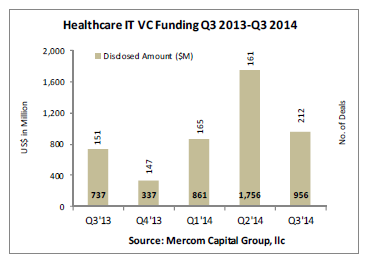 Consumer-focused technologies received 65 percent of all VC investments in the third quarter of 2014, with $623 million in 140 deals compared to $678 million in 100 deals in Q2 2014. Areas that received the most funding under this category were Mobile Health with $345 million in 82 deals, followed by Telehealth, which had its best quarter, with $101 million in 16 deals, Personal Health with $85 million in 24 deals, Social Health with $70 million in three deals, and Scheduling, Rating & Shopping with $23 million in 15 deals.

Practice-centric companies received $333 million in 72 deals in the third quarter of 2014, compared to $1.1 billion in 61 deals in Q2. Under this category, the areas that received the most funding were Revenue Cycle Management with $75 million in eight deals, and Data Analytics with $71 million in 19 deals. 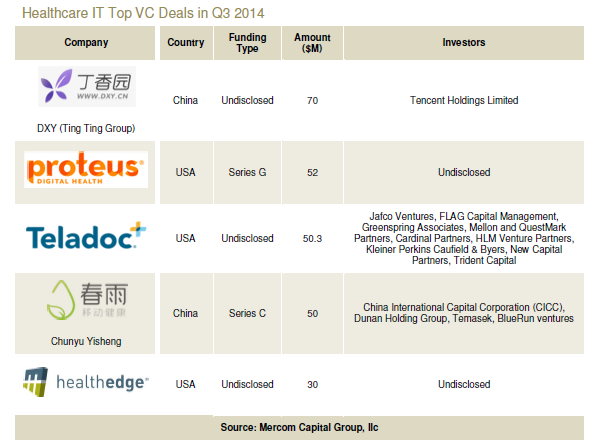 Globally, U.S. companies raised $760 million from 174 deals. Companies from 18 other countries participated in funding in Q3 2014, compared to 13 in the second quarter. With almost $200 million raised in 38 deals, countries outside of the United States accounted for about 21 percent of the fundraising this quarter, the largest share since we started tracking funding activity in 2010.

For the report, visit: http://store.mercom.mercomcapital.com/product/q3-2014-healthcare-it-funding-report/