Why not explore what’s to gain from crowdfunding when there’s nothing to lose? MedStartr’s co-founder and CEO Alex Fair explains. 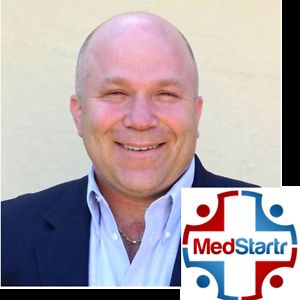 Thinking about joining the crowd? We know, your mother probably told you not to get mixed up with the wrong kind. But according to MedStartr’s Alex Fair, there’s a lot right with the mob mentality growing among today’s entrepreneurs; crowd communities are creating equitable springboards for promising startups. That’s right, we’re talking about crowdfunding. After all, there is strength in numbers— especially from those that come with dollar signs.

Last April, things became a bit easier for US startups and small businesses thanks to the JOBS ACT and its legalization of rewards and donation-based crowdfunding and the near-term promise of equity-based crowdfunding legalization. The ink on the Act may be less than a year old, but the positive impact deriving from the emergence and explosion of such funding sites and online platforms is already evident and quite substantial for some. And it looks promising for those in healthcare as well.

Take the success of Misfit Wearables, for instance, a startup developing slight and simple activity-tracking devices (Think pedometers only with far more technical sophistication and substantially less bulk.) has raised more than $750,000 via Indiegogo, an international crowdfunding platform. Even more impressive is the funding for Pebble (a smartwatch that connects to iPhones and Androids), which raised more than $10 million via Kickstarter in early 2012.

Pebble was the most successful project supported by Kickstarter last year, but the project wasn’t officially positioned as a health project. However, when Pebble and Runkeeper (a fitness tracking app) joined forces with plans to integrate the two technologies, the project adopted a more health-focused agenda. Had it been slated as such in the beginning, Pebble most likely would not have been supported by Kickstarter.

Surprisingly, the popular crowdfunding site doesn’t permit health, fitness, or medical projects. Pebble may have walked the fine line to receive its funding, but healthtech startups that were not as nimble were not as lucky. So, why not fund healthcare startups? That was the question Alex Fair, organizer of the NYC Health 2.0 chapter, asked when he noticed Kickstarter’s rules specifically proscribed healthcare projects while he considered.  He wanted to crowdfund his  FairCareMD.com project: an online platform where patients and providers can meet and agree on fair prices for healthcare services.  He looked at other sites and found that while others did allow healthcare projects, they weren’t often funded and when they were it was for something like a movie.

With hundreds of companies in his meetup group that could use a “Crowd Round” and needing one himself, Fair saw the need and inherently knew why generalist DIY platforms would not work well for crowdfunding,. Instead of being detered, the serial entrepreneur was inspired to build a crowdfunding platform specifically designed for healthcare innovators. A few weeks later, Fair launched MedStartr last July after partnering with Mike Pence, founding product manager of Kickstarter. Thanks to MedStartr, healthtech startups now have the ability to throw their hats in the crowdfunding ring, crowns facing up to collect those desired dollars, of course.

Medstartr.com isn’t all that different from other crowdfunding sites. What sets it apart, however, is its understanding of the challenges in the healthcare market, according to Fair. Furthermore, the site doesn’t just target consumers, but also reaches patients, physicians, hospitals, and medical device and big pharma companies.

For those of you seeing green, don’t get carried away just yet. Money may seem to be the main attraction of crowdfunding, but most young startups won’t obtain oodles of cash from it, said Fair. So, is there more to gain from crowdfunding besides a little extra spending money?

According to billionaire investor Mark Cuban, crowdfunding isn’t just about virtually garnering funds; it’s about proving that your ideas are worth having, and product worth pursuing, in the first place. Thus, Cuban believes crowdfunding should play a part in the early stages of business development. He sees crowdfunding as a rite of passage for startups, giving them the opportunity to not just demonstrate their potential, but also test their ability to achieve marketable appeal.

“It’s a way for you create demand and sell the product without giving up any equity. That is a compliment to what an investor might do,” said the formidable Shark Tank judge during a NextMarket podcast. “In terms of PE (price to equity), there are strategic investors and then there’s just money. I’m not a big fan of money investors, which is what most angel investors turn out to be, because they just want their money back. I try to be very strategic, I try to add value, or I don’t make the investment.”

Fair seems to agree with Cuban’s sentiments; there is much more to crowdfunding than funds, especially for those in healthcare where the gaps between innovation and generation are far more challenging to bridge. So, if there are good reasons for healthcare startups to crowdfund, what are they? We at HIT Consultant turned to Fair for the answers.

Here are 8 reasons why every health tech startup should use crowdfunding:

Sometimes an idea isn’t ready for primetime; new concepts need work. Using a crowdfunding platform to engage you an audience can also create the perfect environment for instant feedback. Often times, those communications lead entrepreneurs to face some hard truths and difficult decisions. However, those willing to listen to their audience also have the opportunity to refine their product and form new partnerships to be successful.

“Take Dr. Jen Dryer’s EndoGoddess (a diabetes management app), for example,” said Fair. “The product changed names to EndoGoal, became integrated with AgaMatrix, and partnered with Genomera for their clinical trial. All of that was figured, formulated, and funded on MedStartr and from the feedback received there.”

For zero cost, startups can quickly learn how potential customers want to buy their products or services. “You can offer up your product a dozen ways and see how people buy it. This is market-testing gone wild, and we often see whole new product offerings and business models grow very quickly on the platform,” said Fair.

The average project on MedStartr is receiving more than $7,000. While Fair said this may not seem like much, startups need to think of it as being paid to advertise. “How much would you have to pay Google AdWords to get 4,000 people to watch your video?” he said. “Every scrappy entrepreneur should crowdfund for this reason alone.  Some people raise millions, but honestly, they are the outliers. You have to be realistic.”

Who knows about your company? That’s a question crowdfunding platform can help you answer and build upon, according to Fair. “When 4,000 people watch your video, great things happen. Generally, we see a news story or two for most projects, helping millions hear about our projects. Literally, we or our clients get at least one story a week – everywhere from MedGadget to ABC News to the New York Times.”

Partnerships are crucial in healthcare, and without them, most healthcare startups will fail. The average successful project on MedStartr gains at least two partners, according to Fair. Some stand to gain even more partners. For example, Fred Trotter’s DocGraph has received more than two dozen in less than eight weeks while the company raised over $45,000 on MedStartr.

Did you ever meet with a Venture Capitalist and they say something like, “Come back when you have 100 customers.” But how do you get 100 customers pre-product, pre-funding, pre-marketing budget? The answer is crowdfunding.

Startups that don’t have a marketing budget can still attract customers through crowdfunding sites. “If you make the rewards a promise of your product at cost when it is available, you could find yourself with thousands of customers who have just funded your really cool idea into existence,” said Fair. “And best of all, you didn’t give up a scrap of equity and changes the conversation with much more interested VCs and Angels.”

According to Fair, the average successful project garners more than $300,000 in offline funds, more than twenty times the figure startups are raising online. However, those offline opportunities are often spurred by the preliminary exposure created by online sites such as crowdfunding platforms.

Fair gives the example of David Chase and his Avado (a patient relationship management tool). Chase raised $7,585 on MedStartr, a humble and average online sum. After hitting his mark on MedStartr, however, Chase went on to received hundreds of thousands in offline grants and raised another million on AngelList. Fair doesn’t see Chase’s success as a coincidence, and frankly, neither does Chase.

“The bar is very high to get a health-tech startup rolling in terms of market adoption; most healthcare customers will only buy if there’s meaningful market traction and VCs will only invest if there’s market traction,” said Chase in a written comment on a TechCrunch article featuring MedStartr.  Chase went on to outline his reasons for his company’s participation with the crowdfunding platform, which included the platform’s aim to bridge the gap between market inefficiencies and innovative providers looking for innovative solutions and its unique partnering angle.

“The biggest reason to participate was to support the healthtech startup ecosystem,” added Chase. “It’s tough to get something like this off the ground but someone like Alex who has built a huge health 2.0 community in New York is the right guy for the job.”

8.   Get Faster Results, Whatever They Are

Whether you win or lose in crowdfunding, Fair says it will happen at an accelerated pace. If it is good, you will find your company accelerated and all sort of good things happening.

If it is bad, you will quickly figure out that you need to work on something else or modify the idea significantly. It may not be good news, but it is efficient news, nonetheless: “If your project fails, you know what not to work on faster. That’s just as important as knowing what to work on.  This happened with our FairCareMD project which we switched to an advertising-only model and is now finally profitable” said Fair.

Fair’s reasons to embrace crowdfunding may seem biased, but they are also convincing, even if they come with the sobering reality that most funds earned online aren’t substantial. But so what?  Maybe crowdfunding isn’t the most direct means of getting your healthcare startup off the ground, but it certainly will drive awareness and customer acquisition, and what startup doesn’t need that? Perhaps, the question to ask is not why to embrace crowdfunding, but why not?

Even if your project doesn’t stand out in the crowd, it’s possible that you will gain something far more valuable than the almighty dollar from being a part of one—like understanding if your ship will sail before you even build it. Positive results or not, crowdfunding seems like the perfect catalyst to produce such swift conclusions. Thus, perhaps crowdfunding’s greatest value comes not from what it earns, but what it saves; You may not make millions from it, but it could prevent you from wasting a great deal of sweat equity and time. And what’s more valuable than that?