I always seem to come to the annual Epic Users Group Meeting with mixed emotions.  The fall event has grown to become almost overwhelming as Epic’s customer list has grown.  As a result it becomes harder and harder to have meaningful connections with friends and colleagues that are one of the highest value opportunities of such forums.  But I have grown to appreciate and enjoy the Epic Intergalactic HQ at Verona and come to anticipate seeing the latest and greatest developments and construction on the campus.

The first day is dedicated to Advisory Councils, more user type specific forums, and I attended the Physicians Advisory Council and I was part of a panel presentation as part of Epic’s inaugural EHR Safety Forum. Traffic seemed exceptionally heavy on Day 1, but it seemed that as usual, Epic quickly adjusted to improve the logistics of this huge event. There were very good presentations at the Safety Forum on how Epic and customers were addressing patient safety issues with the EHR and those that can result from Health IT.  One observation I had throughout the event is that Epic has become much better at listening to its customers, and turning that information into development much more quickly than previously.  We had beautiful weather in Verona, and many folks enjoyed the abundant activities Epic had to offer. The theme of this UGM was Rock ‘n Roll and Epic did a great job in integrating the theme into all of the events and activities.  Day 1 was just a prelude to the opening of UGM. 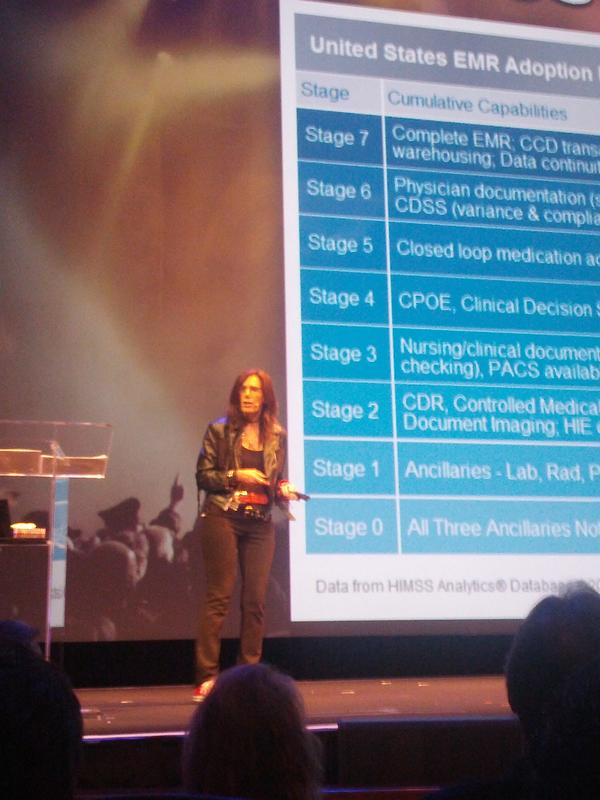 As always UGM is kicked off by the opening ceremonies including an address by CEO Judy Faulkner and COO Carl Dvorak.  They presented the progress toward the vision of what Epic is trying to build and welcomed new customers, two of the biggest being in terms of visibility being Partners Healthcare and HCA.  The astounding growth of the company is reflected by its customer list and by the construction on the campus, the focal point being the new auditorium being built to replace the huge but already outgrown auditorium know as Shake, Rattle and Roll.  The morning continued with What’s New and What’s Coming, which really showed how Epic seems to get the direction of Health IT, including the importance of the patient in the center of the development.  Many great things coming including MyChart Bedside, which is the patient portal intended to keep patients and families informed about their hospital stay.  They also demonstrated great continued development for Epic Haiku and Canto, which are smartphone and tablet versions of Epic Hyperspace.  They continue to expand the functionality of these mobile tools in a way that they are part of an integrated suite of products.  It was exciting to see the expansion of the availability of voice integration in all of the tools as well.  Then the group went into the great skit/playing product development deftly together with entertainment based on the Rock ‘n Roll theme.  I always applaud the work that goes into putting such a production together, and they did not disappoint.

Then of course, UGM was formally open and the rapid pace of Epic led and User led educational sessions began, supplemented by Deep Dives, unsessions and demonstrations.  A variety of vendors were in attendance displaying their tools that integrate with or supplement Epic Hyperspace.  One of my dislikes it how many sessions there are and how hard it is to efficiently match my own interests with what is being offered.  There were many great sessions, as always and even though I always feel like I did not pick the best ones for me, I did enjoy my educational sessions as well as the networking opportunities that arose.  Again, Epic does such a great job with the logistics including food, transportation, entertainment and hotel that the hardest thing is taking it all in.  And while the company continues to grow it does seem to manage to keep the small company feel.  And I always say that Epic’s biggest asset is its customers, who are the most collaborative and collegial group of folks I have ever had the pleasure to work with and I continue to be amazed at how much can be learned from them through various forums and connections, including UGM.

I will probably struggle with the decision to come back next year, but somehow I think they might succeed in pulling me back to Verona next fall.

Dr. Luis Saldana can also be found on Twitter at @lsaldanamd

« 6 Pillars of Responsible Population Health Management
Will The Health IT IP Battle Heat Up as PHR Patents are Granted? »