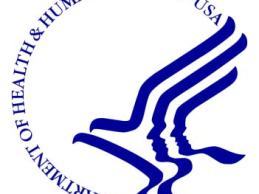 - HHS announces San Diego Regional Health Information Exchange and The University of Texas at Austin (UT Austin) as awardees of the LEAP in Health IT funding opportunity. - Awardees projects will focus on advancing health IT interoperability to improve healthcare for patients nationwide.The U.S. Department of Health and Human Services’ (HHS) Office of the National Coordinator for Health Information Technology (ONC) today announced two awards under the Leading Edge Acceleration Projects in Health
END_OF_DOCUMENT_TOKEN_TO_BE_REPLACED 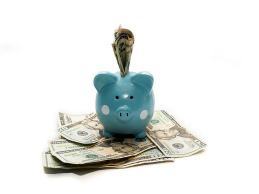 Catalyze co-founders Travis Good and Mohan Balachandran share their company’s success in obtaining Series B funding and the insights that helped them get there.Although investment dollars continue to pour into healthcare IT at a breakneck pace globally, many startups could end up enduring some serious whiplash. Obtaining seed funding is one thing, but reaching the next round is another. Investors are becoming less impressed by innovations and more discerning with their dollars. Thus, the
END_OF_DOCUMENT_TOKEN_TO_BE_REPLACED 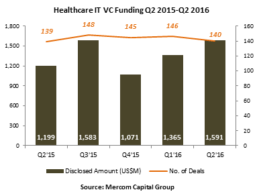 Healthcare IT funding reached $1.6B in 140 deals in the second quarter of 2016, representing a 33% increase compared to the $1.4B raised during the same period in 2015, according to a new report from Mercom Capital Group. Mercom’s comprehensive report covers healthcare IT and digital health deals of all sizes across the globe.So far in the first half of 2016, close to $3 billion has been raised in 286 deals, a 50 percent increase compared to nearly $2 billion raised during the same period in
END_OF_DOCUMENT_TOKEN_TO_BE_REPLACED 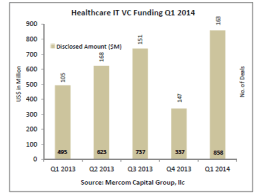 Health IT funding reached $858 million in venture capital funding in 163 deals making it the highest dollar amount raised by the sector in a single quarter to date, according to a new report by Mercom Capital Group, LLC.
END_OF_DOCUMENT_TOKEN_TO_BE_REPLACED