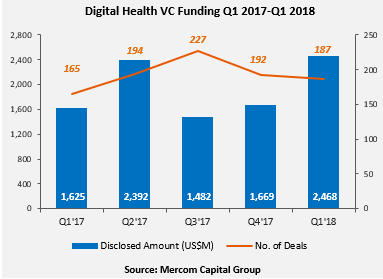 Key highlights of the Q1 2018 Digital Health (Healthcare IT) Funding and M&A Report include:

– There were 55 early-round deals in Q1 2018, including three accelerator and incubator deals.

– A total of 412 investors (including one accelerator/incubator) participated in funding deals in Q1 2018 compared to 371 investors in Q4 2017, of which 13 were accelerators/incubators.

– There were 48 M&A transactions (13 disclosed) in the Digital Health sector in Q1 2018. There was one IPO launched in Q1 from Chinese fitness tracker and smartwatch maker, Huami, which raised $110 million and listed on the New York Stock Exchange.

“Digital Health VC is off to a record start in 2018 with $2.5 billion beating the previous record of $2.4 billion from Q2 2017. Several large deals over $100 million pushed the funding total up in the quarter, with activity powered by over 400 investors,” commented Raj Prabhu, CEO and Co-Founder of Mercom Capital Group.