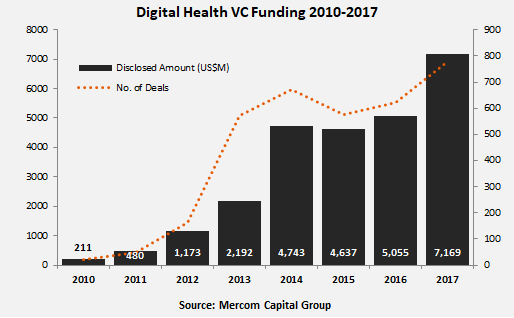 Global digital health funding, including private equity and corporate venture capital reached a record-breaking total of $7.2B in 2017 over 778 deals, representing a 42 percent increase from the $5.1B in 622 deals in 2016, according to the latest report from Mercom Capital Group. Mercom’s Q4 and Annual 2017 Digital Health Funding and M&A report reveals total corporate funding for Healthcare IT companies – including debt and public market financing – climbed to $8.2 billion in 2017, a 47 percent increase from the $5.6 billion raised in 2016.