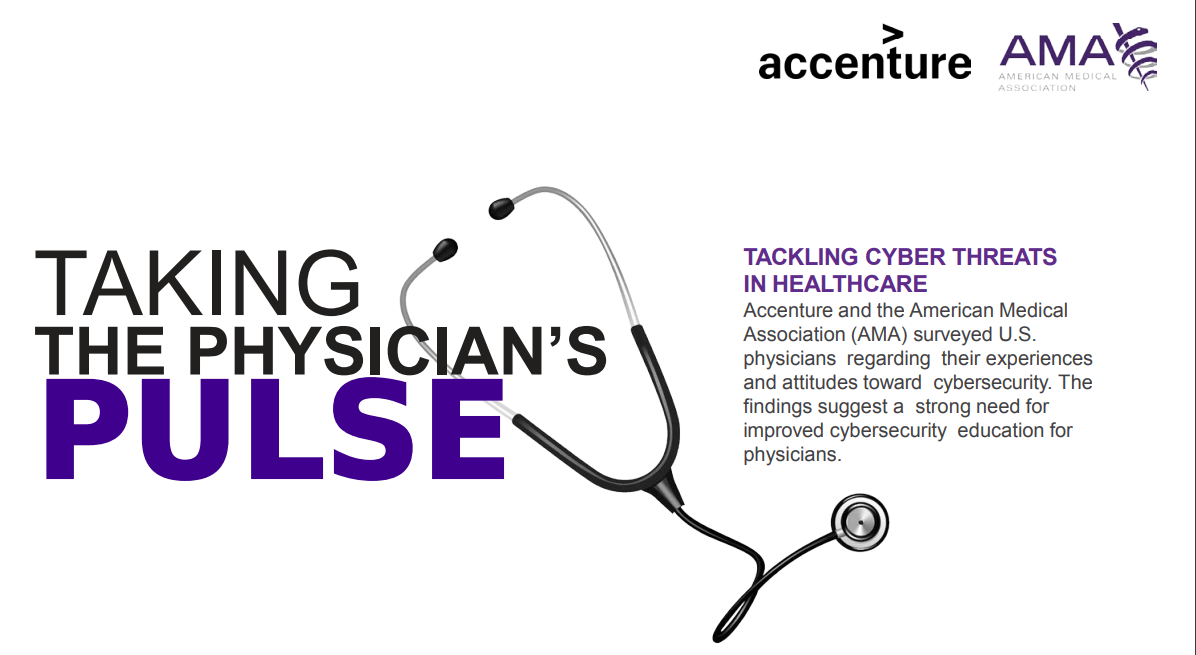 More than four in five U.S. physicians (83 percent) have experienced some form of a cybersecurity attack, according to new research released today by Accenture and the American Medical Association (AMA). The key findings reveal physicians see need for the healthcare industry to increase cybersecurity support for medical practices in their communities. More than half (55 percent) of the physicians were very or extremely concerned about future cyberattacks in their practice. In addition, physicians were most concerned that future attacks could interrupt their clinical practices (cited by 74 percent), compromise the security of patient records (74 percent) or impact patient safety (53 percent).

Conducted between July 2017 and August 2017, Accenture and the American Medical Association (AMA) surveyed 1,300 physicians in the United States to assess their experience and attitudes toward cybersecurity, data management and compliance with the Health Insurance Portability and Accountability Act (HIPAA) guidelines. The findings show the most common type of cyberattack was phishing—cited by more than half (55 percent) of physicians who experienced an attack—followed by computer viruses (48 percent). Physicians from medium and large practices were twice as likely as those in small practices to experience these types of attacks.

In addition, the vast majority (85 percent) of physicians believe it is very or extremely important to share personal health data outside of their health system—they just want to do it safely. Two-thirds believe that greater access to patient data both inside (cited by 67 percent) and outside (65 percent) their health system would help them provide quality patient care more efficiently. In addition, a significant majority (83 percent) of physicians said that HIPAA compliance alone is insufficient and that a more holistic approach to assessing and prioritizing risks is needed.

“The important role of information sharing within clinical care makes health care a uniquely attractive target for cyber criminals through computer viruses and phishing scams that, if successful, can threaten care delivery and patient safety,” said AMA President David O. Barbe, M.D., M.H.A in a statement. “New research shows that most physicians think that securely exchanging electronic data is important to improve health care. More support from the government, technology and medical sectors would help physicians with a proactive cybersecurity defense to better ensure the availability, confidentially and integrity of health care data.”