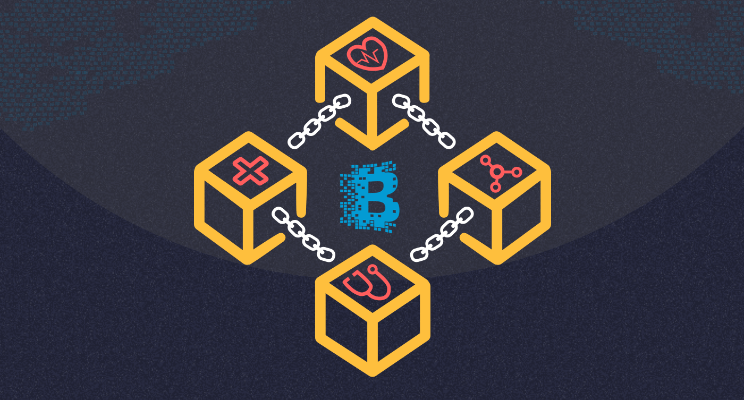 With the end of the year rapidly approaching, it’s about time for articles making technology predictions for 2018 and proclaiming 2017 “the year of the (this space for rent).”

As editors cast about for the healthcare IT story of the current year, they might have a hard time making the case for healthcare blockchain technology based on measurable recent impact, but they’ll have less trouble endorsing blockchain if they look at current hype and future potential.

“Blockchain technology is a game-changer with the potential to impact not one or two industries, but the complete landscape of how business is done,” said IBM’s Blockchain Blog from October. “Better data sharing between healthcare providers means a higher probability of accurate diagnoses, more effective treatments, and the overall increased ability of healthcare organizations to deliver cost-effective care.”

That’s the promise, anyway, of blockchain, for which the best-known application to date is the bitcoin cryptocurrency and digital payment system. Also known as distributed ledger technology, blockchain in a nutshell is an ever-expanding network of records or blocks secured by cryptography.

Once thought of as the anonymizing monetary tool of drug dealers and electronic data hostage takers, bitcoin is now accepted by Microsoft, PayPal and DISH Network.

In healthcare, blockchain is often envisioned as a tool enabling interoperability because, primarily, of strong security. DeepMind, the artificial intelligence unit of Alphabet (Google parent company), for example is building a “blockchain-style system” called Verifiable Data Audit specifically for healthcare.

“Like blockchain, the system will use cryptographic mathematics to keep an accurate record of what’s happened in the past. Every time a piece of data is used, a new code is generated, which is based on all previous activity. That means that if someone later goes back to edit a previous record—say, to hide the fact that they used a piece of data for a particular purpose—it would mess up every subsequent record and be quickly revealed.”

DeepMind’s efforts may make patient data more secure and ensure a bullet-proof audit trail, but it won’t meet all of healthcare’s requirements out of the box. So, what questions do we have to solve for blockchain or similar technology to enable broad and unfettered access to patient data?

– Who will build it? Who will come? Advocates argue that blockchain’s greatest strength is a lack of centralized management and ownership. Bitcoin incentivizes participants, called miners, by giving them some of the currency for performing essential system functions. So, how will healthcare also make it worthwhile to engage?

– Perhaps by providing access to data. At MIT, physician and healthcare IT oracle John Halamka is leading a team that’s created a blockchain-like prototype called MedRec. The presumed “miners” in MedRec are medical researchers and other healthcare professionals who want access to anonymized, aggregated data for epidemiological research.

– Is HIPAA an insurmountable obstacle? How do we manage the patient bill of rights incorporated in HIPAA through blockchain? What happens with all those business associate agreements between hospitals, clinics, healthcare IT companies, payers, etc.? Healthcare is a highly regulated industry. Bitcoin is the wild west. How the same technology is adapted to different environments remains to be seen.

– “We’re hearing that blockchain is going to revolutionize the way we interact with and store data,” said Joe Guagliardo, chair of the Blockchain Technology Group at the Pepper Hamilton law firm. “But it’s not going to happen tomorrow. It may never happen that digital ledger technology is going to replace current infrastructure, because of the regulations.”

– Indeed, how to control who accesses a patient ledger and whether the patient is identified by name (potentially a HIPAA violation) or by national patient identifier number (currently not available) endure as unsolved issues.

– Can patients be properly incentivized? The argument that blockchain is more secure because no one owns the ledger runs up against a challenge in healthcare. Lack of ownership makes incentives—bitcoin, epidemiological data—essential. How do we convince patients to participate in managing their own records when necessary?

– “People don’t want to own their records and that has been proven time and time again if you think about the personal health records that were available to people many years ago,” said Chris Logan, senior healthcare strategist at VMware. “How many people actually took advantage of it?”

Even if we’re not sure how challenges to the use of distributed ledgers in healthcare get solved, we have a pretty good idea of where the resolutions might come from. With so many healthcare organizations at the highest levels clustered together, Boston will probably be the case study for distributed ledgers.

“There are 26 different electronic medical records systems used in the city of Boston, each with its own language for representing and sharing data,” write Mike Orcutt in the MIT Technology Review. “Critical information is often scattered across multiple facilities, and sometimes it isn’t accessible when it is needed most—a situation that plays out every day around the U.S., costing money and sometimes even lives.”

These early stages of technology testing and adoption are often defined by great enthusiasm and unrealistic expectations. Even if blockchain isn’t the answer to all of healthcare’s data-sharing questions, it may be a viable solution to some, and it may spawn offshoots that prove useful in other ways.

The effective application of technology requires taking the time to understand exactly what it can do and where it works well. Do we have the patience to use this technology where it fits naturally or will we try to force it, thereby creating other problems?