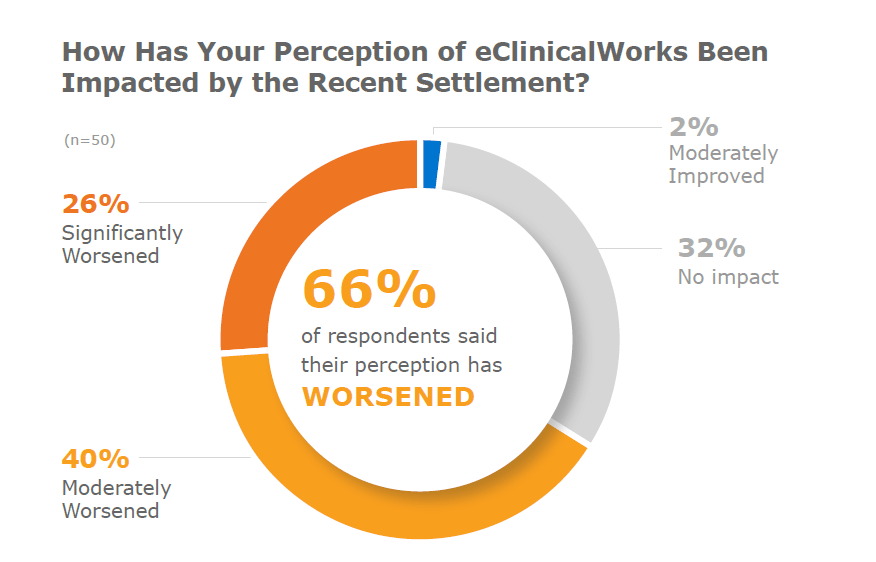 Nearly two-thirds of customers state their perception of eClinicalWorks (eCW) was negatively impacted by the recent settlement, according to a newly published KLAS report. On May 31, 2017, eClinicalWorks reached a settlement with the Department of Justice to pay a $155 million stemming from the False Claims Act for falsely meeting meaningful use certification.

For the report, KLAS reached out to a number of eCW customers who had previously rated eClinicalWorks to see how their satisfaction and future plans have changed since the recent settlement. The KLAS report finds that one-fifth describe the settlement using words like “unsurprising,” indicating that their personal concerns about the vendor’s ethics and business practices have now been confirmed. While some questioned the company’s long-term viability, others are more tempered, saying that the revelation of eClinicalWorks’ behavior is just one more negative in a string that includes a decrease in support over the past few years.

While most users now view eClinicalWorks more negatively than they did previously, a small percentage (<5%) feel the increased governmental oversight will cause the eCW to improve their customer experience and make practices better for the long-term.

– Another third feels stuck in their current contract but would like to switch and may consider leaving when their contract expires or more resources become available.

– The final third are satisfied with their overall experience; they feel the announcement has relatively little impact on them as they have already qualified for meaningful use money or think eClinicalWorks is just the first of many EMR vendors that will come under scrutiny in the near future

– The recent nature of the settlement limits KLAS’ insight into how it will affect ambulatory EMR considerations; however, initial indications show a potential drop in serious consideration of eClinicalWorks as a replacement EMR.

– It is important to note that market consideration for ambulatory EMRs has been on the decline over the past five years due to providers moving towards integrated inpatient/outpatient options. KLAS finds that while providers have actively considered and selected eClinicalWorks, their overall market growth has been kept in check by the number of customers that have left.

What Customers Are Saying About Change in Perception

Quotes from healthcare providers on the perception of eClinicalWorks are all across the board ranging from no impact to significantly worsen.

“In my opinion, eClinicalWorks was in the unlucky position of being first. What happened to them is a shot across the bow by the feds to the industry as a whole. Other EHR vendors will have negative findings against them in the future as well,” said IT Director.

“I wasn’t surprised to hear what eClinicalWorks has been doing. They have been cutting corners, and it has caught up to them. I feel like I have a good relationship with them, but we are already in a mode to replace them. We are just deciding who to go with. This news just makes me double down on my opinion that eClinicalWorks is not doing things the right way,” said CIO.

When asked about the recent settlement, another CIO said, “None of the legal issues surprised us. We have complained repeatedly over the years about many of these issues, such as poor software control, the lack of change control, and the lack of a process for addressing patient-safety issues or tracking. Our belief is that eClinicalWorks will not be able to develop the business structure needed to address these issues.”

For more information on this report, visit KLAS Research.