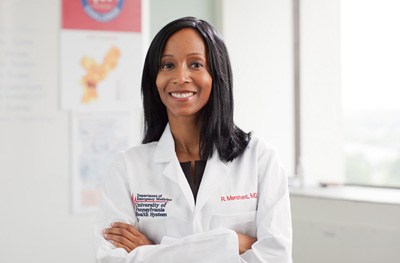 New areas of research focus for the Center for Digital Health include identification of factors linked to depression and obesity, and studying social media to trace language changes that may be associated with Alzheimer’s or other types of cognitive decline.

The Center for Digital Health initially evolved from Penn Medicine’s Social Media Laboratory, led by Merchant since 2013 where the team established a strategy and process to systematically evaluate how social media platforms can affect health, and develop new ways for clinicians to improve care delivery through these channels.

Under her leadership, the team’s research demonstrated the value of mining Yelp reviews for information about patients’ experiences in hospitals, mapped ways in which social media may be harnessed for emergency preparedness and response, and shown that information donated by patients from their Facebook accounts may be paired with their electronic medical records to yield new insights about their health.

“Connectivity and innovation are central elements of Penn Medicine’s strategic plan, and a large and increasing proportion of our patients engage with the world digitally,” said Ralph W. Muller, CEO of the University of Pennsylvania Health System. “Dr. Merchant’s visionary research is harnessing the power of this engagement to transform the way we deliver health care.”

Merchant earned her undergraduate degree from Yale University. She completed medical school and residency in Emergency Medicine at the University of Chicago and came to Penn as a Robert Wood Johnson Foundation Clinical Scholar, joining the faculty in the department of Emergency Medicine in 2010.

Merchant, who is also an assistant professor of Emergency Medicine and has secondary appointments in General Internal Medicine and Anesthesia and Critical Care, began her research career in emergency medicine focusing on cardiac arrest. In 2012, she led the MyHeartMap Challenge, a crowdsourcing contest that sent Philadelphians into the community to identify, photograph, and submit locations of lifesaving automated external defibrillators (AEDs). Using the data gleaned from contest participants, her team created a mobile app that maps AEDs throughout the city, putting them at the fingertips of bystanders who can act quickly to save a life when cardiac arrest strikes.