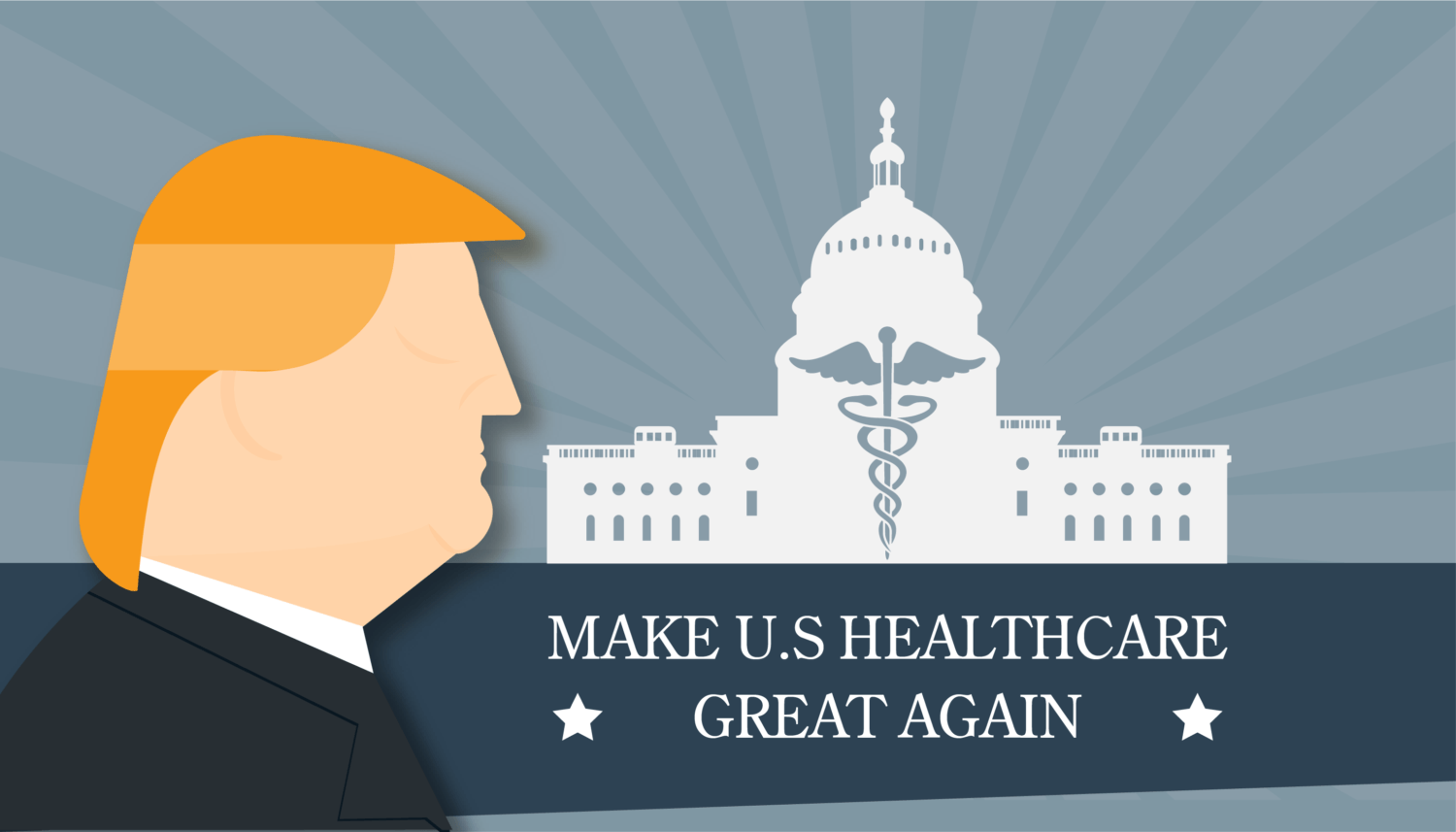 Editor’s Note: Fard Johnmar is a digital health futurist, strategist, researcher and inventor. This analysis is also available in a free eBook, which you can access by clicking here. 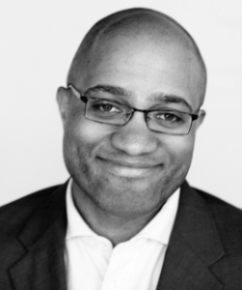 Obviously, the world is a different place than many of us thought it would be when we woke up on Wednesday morning. Hillary Clinton has been defeated. And, the Democratic Party is at its lowest level of political power — from the federal government to state houses and legislatures — in generations.

This week, I’ve been having conversations with clients, from foreign governments to startups, about what this all means, for healthcare in general and for the robust and growing digital health market in particular. I know that many of you may have similar questions about what’s next. So, I’ve decided to help you begin to make sense of this new world and prepare for the future. This analysis is based on the following foundation:

– Daily study and analysis of the global digital health landscape, which offers clues as to how the U.S. market may evolve in a much more decentralized and consumer-centric system

This analysis is preliminary and will evolve based on what we learn over the coming weeks. However, based on early signs coming out of Washington, and previously outlined conservative plans for the Affordable Care Act, there are signs that this is how things may evolve over the coming months. And, this is not a political analysis and I won’t comment about the social/societal implications of the potential health system changes outlined below.

Conservatives’ Baseline Economic Argument: The U.S. Government is Too Financially Invested in Healthcare and Must Pull Back Sharply 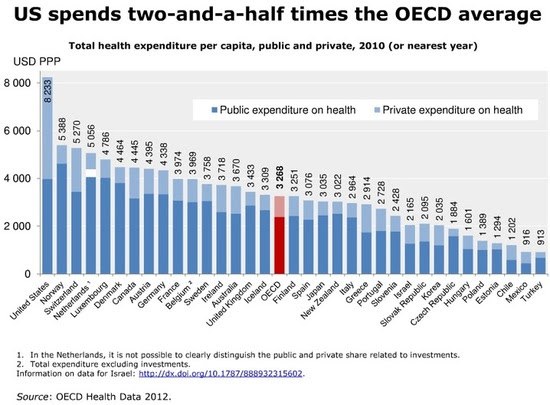 Above is data (from 2012) showing that overall spending on healthcare in the United States is the highest of all OECD countries. The simple story is that the Obama administration decided to address this problem by developing legislation that would change the private sectors’ behaviors, partly by providing financial incentives to move from a fee for service payment system to one where payments were based on value delivered and improved health outcomes. At the same time they wanted to improve access to care, so the Affordable Care Act provided incentives to consumers to purchase insurance, and, because healthcare is expensive, provide subsidies to do so.

What happened is that healthcare providers, payers and government worked to shift provider and hospital behavior by moving from volume to value. (This has led to many opportunities for B2B digital health companies and significant changes in how providers/hospitals, etc. operate.)

On the consumer side, many younger adults decided to forgo insurance (premiums were too expensive), older, sicker and poorer people took advantage of health insurance and costs (although at a slower rate) continued to rise. Faced with increasing medical expenditures due to populations that needed more care, and reduced margins, health insurers raised premiums and even began to exit the healthcare exchanges, partly, because they did not operate as advertised: deliver a balanced young/old, more affluent/poorer, healthier/sicker population.

So, you have a situation where government’s overall spending on heatlhcare has not significantly decreased and is even slated to increase further as reliance on government aid/programs grows and the population continues to age.

Paul Ryan, who is now at the center of the legislative healthcare policy universe, and others have developed legislation/recommendations that are designed to sharply reduce government spending on healthcare via a range of tax and fiscal policies that:

– Reduce Federal Spending on Government Health Programs/Influence on the Market: This may be achieved via a range of measures, including repealing (perhaps parts) of the Affordable Care Act (ACA), modifying the Medicaid expansion, providing Medicare beneficiaries with direct vouchers to cover the costs of care (that they would use to shop for insurance on the open healthcare market) and more

It is far from certain that these radical changes to U.S. healthcare policy will happen immediately. The debate over the fate of the ACA will be intense, with payers, hospitals, physician groups and others working hard to ensure their interests are protected.

There is also a major wildcard: the public. Many, reliably (and new) Republican voters like having access to insurance via the ACA (but not the rising premiums), would feel threatened by any changes to entitlements (especially Medicare) and more.

In addition, it is uncertain whether President Trump would be willing to engage in an action that, politically, may be very damaging: removing more than 20 million people (many of them are his voters) from their insurance coverage.

However, what’s clear is that the ACA as it is currently constituted may not survive long-term. And, Ryan (and other traditional conservatives) have long believed that radically increasing consumers’ financial responsibility for care, sharply reducing government’s role in the system and other actions are the key to controlling healthcare costs.

How the New Policy Universe May Impact U.S. Digital Health

In many respects, the U.S., and to some extent the global digital health market, has been fueled by the ACA. It has led to many trends, including, but not limited to:

1. Data-Based Decision-Making: An emphasis on using data, sensors, analytics, including machine learning, and other tools to track and influence workflows, medical utilization and other important drivers of spending at the individual and population levels

2. A Focus on Consumer Behavior Change: This is especially relevant in the area of corporate wellness, which the ACA worked to encourage by emphasizing wellness programs, which have led to an increased use of wearables and other Internet of Things technologies to track worker wellness and behavior.

In this new potential policy landscape the biggest question on people’s mind may be this: Will the U.S. digital health market slow or stagnate under a Trump administration? Perhaps not.

New federal policies that expose consumers to much greater financial risk, place added cost pressures on states, hospitals, and providers and more may actually lead to increased investment in digital technologies in some of the following areas:

3. Consumer-Facing Technologies: Consumers will be faced with using limited dollars to purchase healthcare plans on the open market. And, they will need help, in much more significant ways than exist now in shopping for care, accessing physicians and more

4. Sensors and Tracking Technologies: From the consumer and payer perspective, expect the increased use of financial incentives by payers to reduce premiums, perhaps in exchange for allowing for the tracking and monitoring of consumer behavior, to increase. These tools may also be used by resource-strapped hospitals and other institutions to gather the data they need to potentially reduce expenses

5. Analytics/Big Data and Population Health Management: Although the insurance expansion components of the ACA may fall to repeal, the cost saving-related regulations will likely stay, and the move from volume to value will only increase as private and public payers place significant pressure on hospitals, providers and others to drive spending down by continuing to reduce re-admissions, hospital errors, etc.

6. Artificial Intelligence and Smart Assistants: As consumers, payers, hospitals and others seek to reduce their exposure to future financial risk, look for the increased use of behavior change support tools (AI virtual assistants) and other technologies to provide support, information and ongoing behavioral nudges

Future Digital Health Investment Activity and Market Dynamics in the U.S.: India and China May Offer a Crystal Ball

In some respects, we can glean some clues in terms of what the U.S. digital healthcare market may look like over the medium and long-term as we move from a less centralized to a more self-pay (consumer) market. For example:

– China, which has significant infrastructure issues, access and quality problems, but a large self-pay market, is embracing the use of consumer-facing technologies such as mobile, wearables (fitness and tracking) and even smart symptom checkers. With self-pay/financial burdens increasing, parts of the consumer market may begin to align with what is happening in China.

– India: With decentralization, we may see increased use of non-hospital care (mini-clinics, Walgreens, etc.) for routine care, especially as they may offer services that are less expensive for consumers. Startups in India have developed a range of tools designed to help patients locate highly rated physicians, communicate more easily, schedule appointments, access care and more. Studying India’s emerging healthcare sector (and its use of technology) may provide insights into how the U.S. market will evolve.

Investments in China and India have been focused more on the consumer-facing market (wearables and mobile, especially). In the U.S., we may see a continued focus on Big Data/analytics along with more emphasis on consumer-facing tools as the health policy landscape shifts over the coming months and years.

Clearly the weeks and months ahead will be a challenging period for consumers, payers, government officials, investors and others who have heavily invested in digital health under the assumption that the policies and approaches pursued under the Obama administration would continue.

To succeed in this new environment, everyone focused on digital health will need to:

·  Constantly and carefully assess their digital health innovation efforts to understand what assumptions need to be changed, new opportunities that may present themselves and ways digital technologies can be of most aid — especially to the most vulnerable

·   Look broadly for strategies and solutions — inside and outside the United States — for how best to proceed, as case studies focusing on regions and countries that have excelled at digital health innovation in resource-constrained environments could prove highly useful

Of course there is much that we don’t know about how the digital health economy will evolve under the new U.S. federal government. This is why I will continue to refine and expand on this analysis during the weeks and months to come. You can access the analysis outlined in this article and future insights by downloading a copy of my new free eBook, Digital Health in the Age of Trump: What Can We Expect? I will be frequently updating this resource, which is available for download on this Web page (click here to access it).

Mr. Johnmar is a digital health futurist, strategist, researcher and inventor. He is a nearly 20-year global health veteran who has spent more than 10 in the digital health arena. He is also the co-author of the #1 global bestseller, ePatient 2015: 15 Surprising Trends Changing Healthcare, which explains the impact of digital technologies, policy, culture and legislation on health and well-being globally.

He has been featured in numerous major media outlets including the Los Angeles Times, NPR and Forbes. He is also a fellow at the Columbia University-affiliated Healthcare Technology and Innovation Lab.