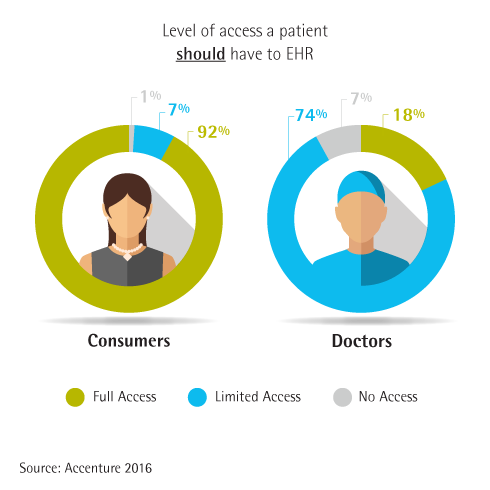 These U.S. findings – part of a seven-country survey of roughly 8,000 consumers, including 2,225 in the United States – also found that the number of patients who know exactly what data they can access in their EHRs has increased by more than 50 percent over the past two years, from 39 percent in 2014 to 65 percent today.

– Most consumers (77 percent) want to see exactly what the doctor sees – not a summary. However, significantly more consumers are likely to access their EHR to stay informed than they are to help with making medical decisions (41 percent vs. 6 percent).

– The areas cited most often by consumers for using their EHRs to manage their health include having access to lab results (41 percent) and having access to their physician’s notes about the visit (24 percent).

– Consumers have strong views on who should access their EHR data. While three-fourths view an EHR as a tool for their primary doctor, fewer than 1 in 30 consumers believe that an employer or government organization should have access to their records (each cited by only 3 percent of respondents), and fewer than 1 in 10 (9 percent) believe that a retail clinic should have access to their records.

– Majority of consumers believe they should be able to update certain information in their EHR, including family medical history (cited by 89 percent), new symptoms (87 percent), demographic information (86 percent), changes in symptoms (86 percent) and personal medical history (83 percent). The number of doctors who believe patients should also be able to update various elements of their own records was similar to that for consumers.

Accenture commissioned a survey of roughly 8,000 consumers in seven countries to assess their adoption and attitudes toward digital health tools, electronic health records and their healthcare providers’ electronic capabilities. The seven countries represented were the United States (2,225 respondents), Australia (1,013), Brazil (1,006), England (1,009), Norway (800), Saudi Arabia (852) and Singapore (935). The survey was conducted by Nielsen between November 2015 and January 2016. Where relevant, the survey refers to select findings from a similar physician survey to compare doctor and consumer responses.