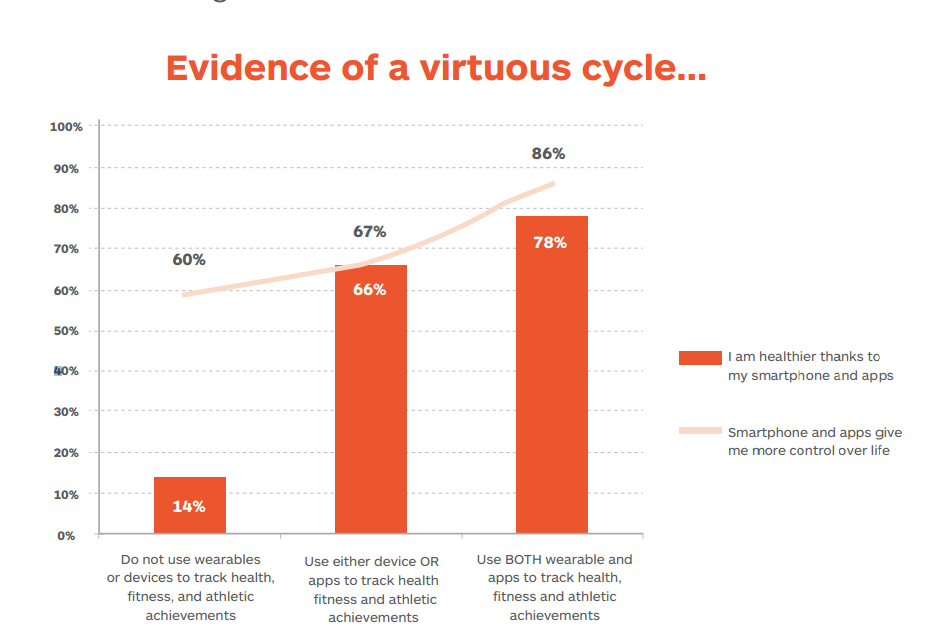 Expectations that smartphones and apps will change how people manage their health have risen to 69%, according to recent results of Apigee Institute’s 2015 Digital Impact Survey. Since Apigee’s first Digital Impact Survey in 2013, more than 42 million additional Americans now report that smartphones and apps have changed the way they manage their health and wellness, representing a 70 percent increase in adoption.

According to the survey, 60 percent of adult smartphone owners in the U.S. – and nearly three quarters of millennials (71%) – say smartphones and apps have changed the way they manage their health and wellness. Additional findings show that almost half (49%) and a majority of Millennials (53%) now want their doctors to use data from their fitness tracker and/or from health apps as part of their care.In fact, 8 in 10 expect a doctor to offer key services via apps either now or within the next one to two years.

Millennials’ opinion goes a step further. More than one in four (28%) would prefer a doctor who uses app and fitness tracker data as a regular part of their practice, implying it may be a reason for choosing a doctor, rather than just a “nice to have.”

– By 2017, digital’s impact on health and wellness may reach late majority adoption, suggesting that this industry may be the next “digital frontier.”

– More than 62 million Americans—37 percent of adult smartphone owners—report that they are healthier thanks to their smartphone and apps.

– Among those using both a fitness device and apps to manage their health and wellness, nearly nine in 10 (86%) feel their devices give them more control over their lives.

The 2015 Digital Impact Survey surveyed 1,000 smartphone owners 18 years of age or older in the United States. Respondent data was modeled on key demographics proportional to known benchmarks for smartphone owners. Respondents were weighted to match the November 2014 omnibus survey by the Pew Research Center, filtered to smartphone owners over 18. Those polled demographically match Pew’s sample in terms of age group distribution, income, education, and regional representation. The Digital Impact Survey is conducted online with respondents sampled from leading industry consumer panels who clear multiple quality checks during the survey process.