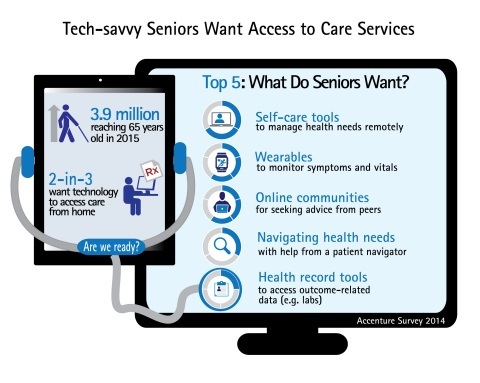 An estimated 3.9 million Americans are reaching 65 years old this year, there’s growing demand among seniors (67 percent) who want digital health tools for accessing care services from home, according to an Accenture survey. The consumer research conducted by Accenture between May and June 2014 with 10,730 adults across 10 countries reveals seniors who place a higher priority on technology are more likely to proactively manage their health.

“What this means for healthcare systems is that they need to consider the role that digital technology can play in making healthcare more convenient for patients of all ages at every touch point,” said Kaveh Safavi M.D., global managing director of Accenture’s health business.

The survey results found the following five digital health tools they are most interested in using to better manage their healthcare:

1. Self-care: More than two-in-three seniors prefer to use self-care technology to independently manage their health. AARP estimates start-up funding in this area grew to $166 million in 2013, up from $143 million in 2012.

2. Wearables: More than three-in-five seniors are willing to wear a health-monitoring device to track vital signs, such as heart rate and blood pressure. AARP estimates $266 million in funding was invested in this area in 2013, more than 2011 and 2012 combined.

3. Online Communities: Three-in-five seniors are somewhat or very likely to turn to online communities, such as Patient Like Me, for reactions to a doctor’s recommendation before acting on it. AARP estimates funding for these platforms rose to $142 million in 2013.

4. Navigating Healthcare: A third of seniors would prefer to work with a patient navigator to manage their healthcare. Last year, $384 million was invested in solutions, like patient navigators, for care navigation.

5. Health Record Management: A quarter of seniors regularly use electronic health records for managing their health, such as accessing lab results (57 percent), and projections by Accenture suggest it will grow to 42 percent in five years, as consumer-facing tools increase.

Additionally, Accenture’s survey showed the top reason for most seniors (62 percent) to go online was to find health information. Most seniors want access to healthcare technology, such as virtual physician consultations (20 percent), but less than a third of healthcare providers offer such capabilities.