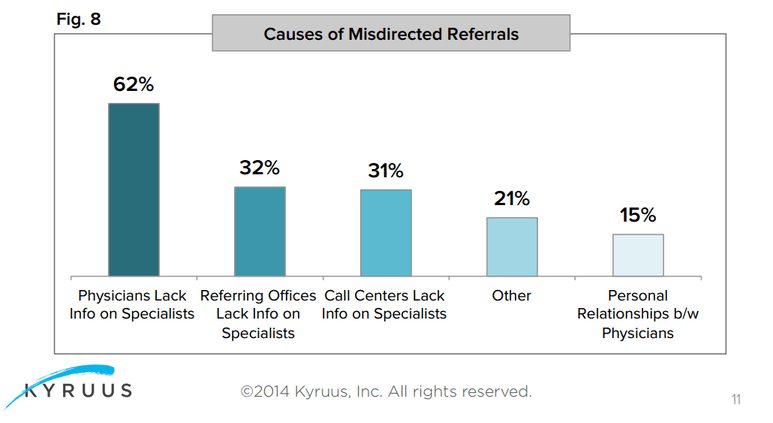 Nearly 20 million times a year in the U.S., patients are sent to a doctor who is not the right match for their specific condition. This is one of many key stats in the new physician referrals survey conducted by Kyruus,that highlights the massive issues in the doctor-patient referral system.

Why does this matter? “Clinically inappropriate” referrals can lead to poorer health outcomes for patients, increased hospital readmissions, ineffective use of doctors’ time and unnecessary patient costs, generating billions of dollars in avoidable spending across the entire U.S. healthcare system. The recent Veterans Affairs wait times scandal is an example of the consequences of these inefficiencies. According to ReferralMD, 50% of referrals never result in a doctor’s visit 20% of malpractice claims for diagnosis error involve referral communication deficits.

– 53.8% of referrals received by specialists come directly from other physicians

– Subspecialists are more likely to receive their referrals both from referring primary care physicians as well as referring specialists who do not have a further sub-specialty.

– 75 percent of specialists have received at least one “clinically inappropriate” referral in the past year.

– 65% of of clinically inappropriate referrals were either sent to the wrong specialist or subspecialist (48%) or did not require a referral at all (17%).

– When sent a clinically inappropriate referral – 63% of physicians will re-refer the patient to another, more suitable, physician.

– What causes inappropriate referrals? 87 percent of physicians believe that referral misdirection happens when there is a lack of reliable information about the specialists.

– 15 percent said inappropriate referrals were a result of the referral process relying too heavily on personal relationships between physicians.

– Of the patients who are referred incorrectly, 63 percent are re-referred to more clinically suitable physicians, incurring an estimated $1.9 billion in lost wages and unnecessary co-pays annually.

– The remaining 37 percent who are not re-referred are instead managed by a clinically inappropriate physician, putting quality patient care at risk.

In February 2014, Kyruus administered a 15-minute online survey to 100 physicians across 11 medical specialties:

The physicians were asked questions about referral methodologies at their institutions or practices, their assessments of the clinical suitability of referrals, and perspectives on the potential causes of referral misdirection.

An infographic illustrating the results of the survey and scope of the problem is shown below: 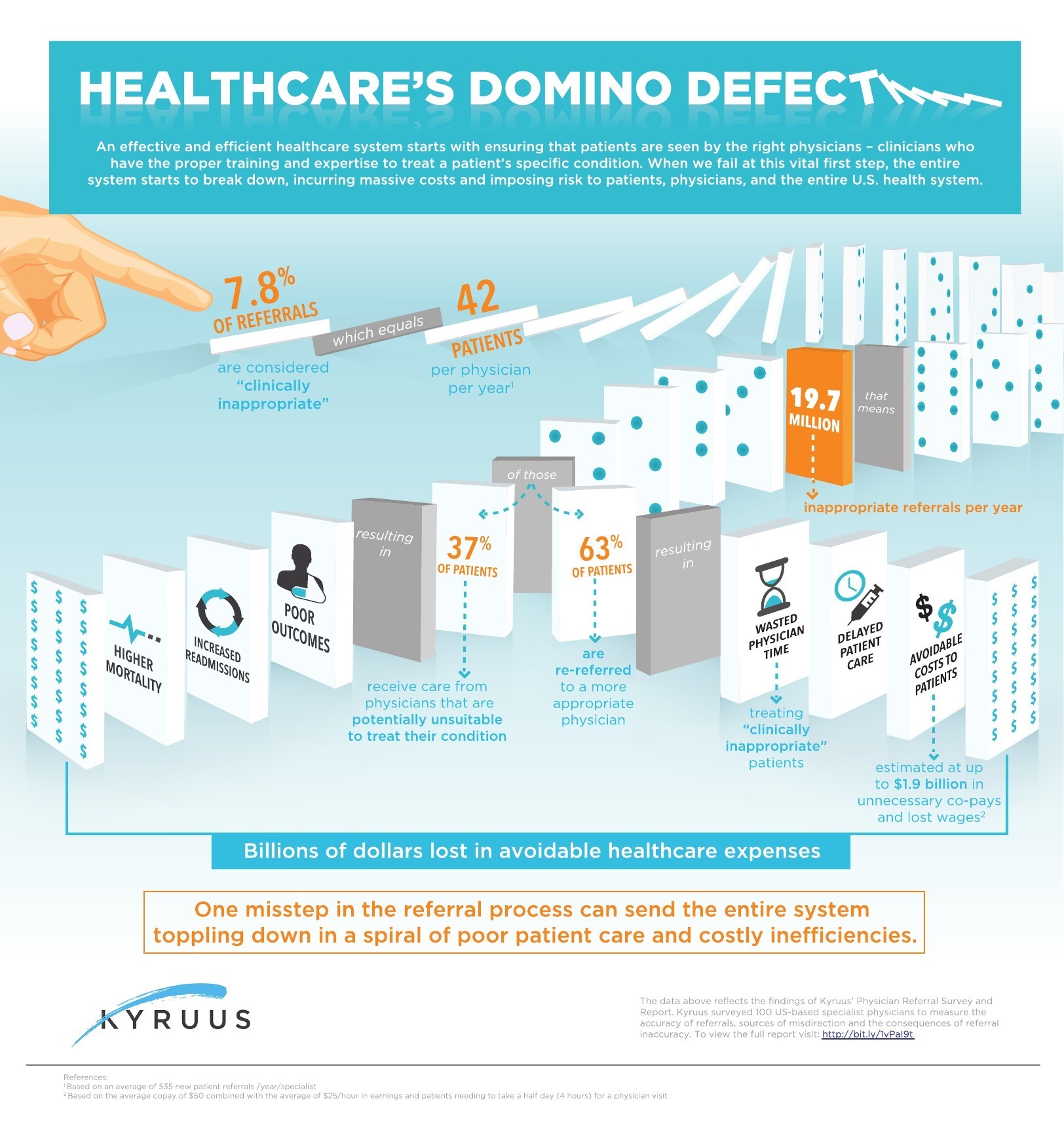 For a more detailed analysis of the survey findings, the Kyruus Physician Referral Report is available at http://bit.ly/1vPaI9t.

« CDISC and HIMSS Collaborate To Enable HIT Interoperability
Report: 61% of Struggling Hospital CFOs Expect to Be Fired by 2016 »