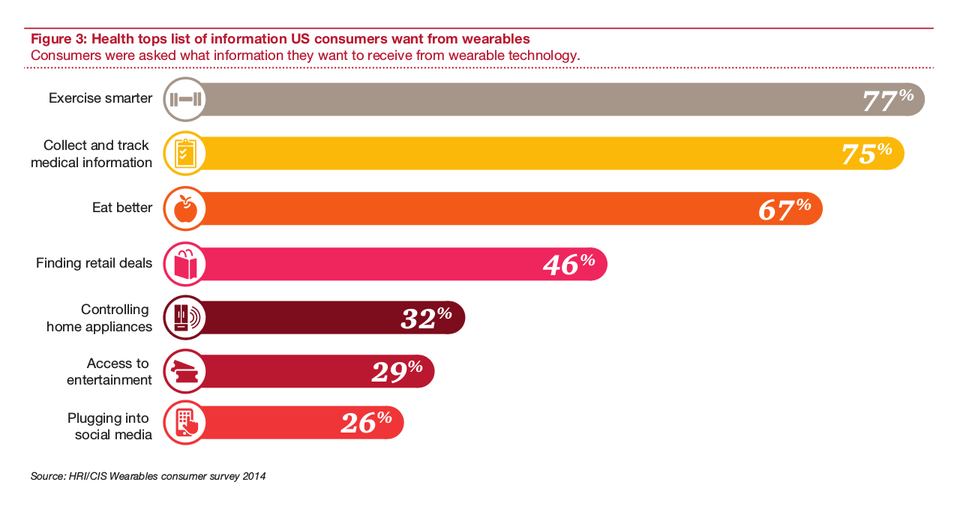 According to Greentech CEO Ian Clark, health wearables are “a bit trivial right now.” “I don’t doubt that the wearable piece is going to be a productive business model for people. I just don’t know whether it’s going to bend the curve in terms of health outcomes,” Clark said at the recent Rock Health Innovation Summit.

While fitness bands, smart watches and other wearables are already established in the market, many of them have under-delivered on expectations. Consider that 33 percent of surveyed consumers who purchased a health wearable technology device more than a year ago now say they no longer use the device at all or use it infrequently. Currently, only 1 in 5 American adults owns a wearable device with only 1 in 10 using it on a daily basis.

Key drivers of the low adoption rate include:

– lack of “actionable” and inconsistent information from such devices

In fact, 82 percent of respondents were worried that wearable technology would invade their privacy and 86 percent expressed concern that wearables would make them more vulnerable to security breaches.

In order for health wearables to take advantage of the $2.8 trillion healthcare opportunity, companies must better engage the consumer, turn data into insights and create a simplified user experience to improve consumer health.  Additional key findings and recommendations from HRI’s Health wearables: Early days report include:

– Consumers have not yet embraced wearable health technology in large numbers, but they’re interested. More than 80 percent of consumers said an important benefit of wearable technology is its potential to make health care more convenient. Companies hoping to exploit this nascent interest will have to create affordable products offering greater value for both users and their healthcare partners.

– Consumers do not want to pay much for their wearable devices; they would rather be paid to use them. Companies – especially insurers and healthcare providers – offering incentives for use may gain traction. HRI’s report found that 68 percent of consumers would wear employer-provided wearables streaming anonymous data to an information pool in exchange for break on their insurance premiums. Moreover, consumers are more willing to try wearable technology provided by their primary care doctor’s office than they are from any other brand or category.

– While employers and health company executives expect wearables to provide valuable insights, few consumers are interested in using wearables to share health data with friends and family, and, citing concerns about privacy, consumers trust their personal physicians most with their health data. Therefore, companies should ensure privacy policies are crystal clear. Physicians already have the trust of consumers, and healthcare organizations have expertise in protecting personal health information. Consumers will want to see those high standards applied to health wearables data, especially as they become integrated into electronic medical records.

– Consumers may need a human touch to help them choose a device and its associated apps. An “apps formulary” of apps vetted by medical teams (and available in a virtual apps pharmacy) could help consumers wade through the thousands of health apps and devices.

“For wearables to help shape the New Health Economy, next generation devices will need to be interoperable, integrated, engaging, social and outcomes-driven,” said Vaughn Kauffman, principal, PwC Health Industries. “Wearable data can be used by insurers and employers to better manage health, wellness and healthcare costs, by pharmaceutical and life sciences companies to run more robust clinical trials, and by healthcare providers to capture data to support outcomes-based reimbursement. But it will be critical to address the consumer concerns that we’ve identified, such as cost, privacy, and ease of use.” For more information,