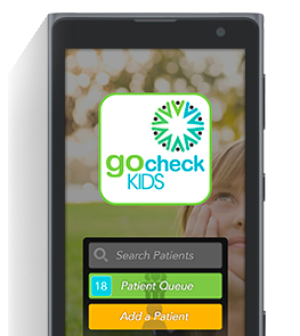 Next month, Gobiquity Mobile Health will introduce their flagship innovation, GoCheck Kids™, the world’s first and only pediatric photoscreening mobile health app used to screen a child’s eyes for risk factors that could lead to vision loss.  Using the GoCheck Kids app, the doctor takes high-resolution photographs of the patient’s eyes, which are then automatically screened for refractive risk factors for amblyopia. The pediatrician can then determine whether to refer the patient to an eye care specialist for further testing and treatment.  By putting photoscreening at pediatricians’ fingertips, GoCheck Kids empowers doctors to identify at-risk children earlier, and ultimately prevent permanent vision loss.

Studies have revealed that between 15-20 percent of children are at risk of amblyopia, with two percent developing the disease, making it the most common cause of visual impairment and loss in children. Additionally, the economic impact of visual disabilities associated with amblyopia is estimated to approach $23 billion annually, when income and quality of life issues are included.  Early detection and referral to a specialist enables doctors to begin treatment early, when it is most effective in preventing vision loss; data shows that if the condition is not caught by the age of seven, it will become permanent. However, traditional vision testing that pediatricians perform with visual acuity charts requires a verbal response, making it impractical for younger patients.  Consequently, many children with risk factors are not identified early enough for treatment. Even in the absence of amblyopia, detecting a visual error in a child is developmentally important.

The GoCheck Kids™ app uses photographs of the eyes, taken with the phone’s camera, to screen for amblyopia risk factors in children aged 6 months to 6 years.

GoCheck Kids photoscreening is ideal for young children from 6 months to 6 years, as the process is fast, they are used to having their picture taken with a smartphone, and they enjoy the sound effects designed to keep a child’s attention during the test.

Photoscreening is endorsed by the American Academy of Pediatrics (AAP) and the American Association for Pediatric Ophthalmology (AAPOS). However, pediatricians have been slow to adopt photoscreening due to the cost and complexity of purpose-built devices. “By leveraging the smartphone as a medical screening device, we can bring affordable, convenient, and user-friendly photoscreening technology to pediatricians,” said Gobiquity CEO Michael Brownell. “One of our primary goals is to provide innovative tools for pediatricians so that they can deliver preventative care and offer early detection for treatable conditions. GoCheck Kids is the first example of our commitment to bringing mobile diagnostic solutions to doctors around the country.  We hope that this will enable many more children to be screened at an early age, and that we can make a real difference in children’s lives.”

GoCheck Kids will initially be launched to pediatricians in California, with a national rollout planned for the fall.  It will be available for zero up-front costs and a nominal usage fee.  Pediatricians who use the new technology will be provided with a smartphone pre-loaded with GoCheck Kids and will be billed per photoscreening or at a negotiated contractual rate depending on the doctor’s screening volume and/or preferences.

In addition, the test is reimbursable under the CPT® code for photoscreening. To obtain the GoCheck Kids app and software, pediatricians can contact at Gobiquity at 949-770-7304. To request a demo go to www.GoCheckKids.com.