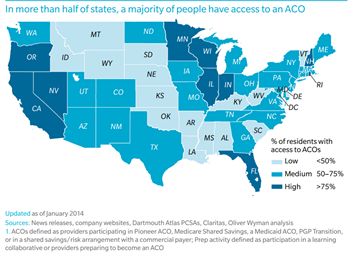 15 to 17 percent or roughly 46 to 52 million of the American population are served by accountable care organizations (ACOs), according to new analysis by the consulting firm Oliver Wyman. The analysis identified an additional 150 additional ACOs, bringing the estimated total to more than 520, up from 320 in July 2013 and 260 in January 2013. This number represents a 41 percent increase since September 2013 and a 102 percent increase since February 2013.

Included in the research are both CMS and non-CMS ACOs. CMS ACOs were classified as any healthcare provider participating in the Pioneer Program, the Medicare Shared Savings program, a Medicaid ACO, or the PGP Transition program. Most Medicare ACOs also serve non Medicare patients.

Lack of an official list or definition made it difficult to count Non-Medicare ACOs and defined them as any provider organization with at least one shared-savings or shared-risk arrangement with at least one commercial payer but not with CMS.