When it comes to the doctor shortage in healthcare, instead of “expanding our doctor pool, we should focus on increasing the productivity of existing physicians and other healthcare workers.”

In a New York Times opinion piece, Scott Gottlieb, MD joins forces with Ezekiel Emanuel, MD to inform us all that “No, There Won’t Be a Doctor Shortage.”And just to clarify, Dr. Gottlieb goes on to say in a subsequent Forbes article, “That Doesn’t Mean You’ll Have Access To Them.”  Doctors, it seems, are destined to be like the lights of Hanukkah candles – only for looking at, not for using. As tempting as it is, let’s not hastily assume that the more fortunate members of society, like the authors of these articles, are brazenly suggesting that maintaining a good supply of doctors for themselves is as simple as denying everybody else access to physicians. Of course not.

To dispel our concerns that an aging population and expansion of health insurance may somehow require more doctors, Dr. Gottlieb and Dr. Emanuel urge us to look at the great State of Massachusetts where universal insurance has been in place for years, and no shortages have been observed. According to the Census Bureau, Massachusetts has almost double the national average of doctors per population, and by the authors own admission, its “experience may differ from other areas.” Looking at Mississippi, for example, would have been a stretch I suppose. Either way, policy makers should be all set, since the only place where doctors seem to be growing on cherry trees is our nation’s capital. Other than that, the New York Times article contains the usual innovative fare, being repeated now in most healthcare journals over and over again. The future holds marvelous technology advances that will minimize duration, complexity and intensity of treatments and non-physicians of all stripes will be delivering most of this now routine care (one interesting suggestion was that pharmacists should deliver urgent care). The main idea is that instead of “expanding our doctor pool, we should focus on increasing the productivity of existing physicians and other healthcare workers.” 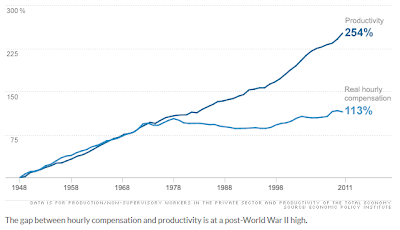 Increasing worker productivity is where America’s exceptionalism truly shines. Labor productivity (i.e. the ratio of output to input) has increased in the U.S. by 254% since WWII (see graph above), and really accelerated in the new millennium. Unfortunately, compensation for this wonderful productivity took a different path somewhere in the early seventies, hence the gaping divide between America and a handful of very wealthy individuals who benefit financially from productivity gains. The conservative Dr. Gottlieb and the progressive Dr. Emanuel are merely suggesting that this very successful business model should now be applied to the horrendously inefficient healthcare sector.  If you think about it, it becomes abundantly clear that this suggestion is actually an imperative. If we don’t find a way to integrate medical services in the lower-wages/cheaper-products innovation cycle, all those wonderfully productive workers will be unable to afford the medicines needed to sustain their blessed productivity.
The New York Times opinion piece, and the many others like it, are the theoretical foundation leading experts such as Dr. Gottlieb to conclude that “there’s every reason to believe that technology will continue to make the aging process itself (and the treatment of many diseases) a far less resource intensive endeavor – and ones that require fewer physician inputs for a higher level of “outputs” in terms of improved healthcare.” This is very similar to how restaurant chains, or canned food manufacturers, have a chef that is shown designing fabulous new dishes, using market fresh ingredients and in TV commercials, but the actual “outputs” in each establishment, or can, require practically no chef inputs. And this is why healthcare is strongly encouraged to learn from other industries that have mastered the art of maximizing outputs to inputs ratios. Fair enough, but how do we know that we have enough chefs or doctors to start with? Luckily, Dr. Gottlieb has valuable insights on this question as well. The argument is that “if there was a shortage of physicians, it wouldn’t be so easy for the Obamacare health plans to push around doctors and trim their pay.” The same logic is used very effectively by defense attorneys in rape cases where the victim did not scream or kick hard enough.

When analyzing things from an economic perspective, shortage of something implies that demand exceeds supply, and demand does not mean need or even want; it means willingness to pay. For example, one could observe that we have no shortage of private trainers, not because people don’t need to work out or because they wouldn’t want a personal trainer, but because most folks are not willing or able to pay for one. Demand, and subsequent shortage, is also a function of culture. There is no shortage of wholesome and freshly prepared foods today, because our culture has been altered to have different expectations from food. Preemptively changing perceptions and expectations is therefore paramount to preventing shortages. So, if back in the 1990s HMOs were “soundly rejected” by the people, according to Dr. Gottlieb, “[w]hat Obamacare, in effect, tells Americans, is that the White House believes many people made the wrong choice when they rejected those HMOs in favor of PPO plans that offer broader access to providers”.” Of course we did. You hear frequently today how fixing healthcare requires a cultural change; how we must choose wisely and how we should not expect that everything is done to prolong individual lives; how we should become more accepting of death and how we should quit running to the doctor every time we are sick; how we should learn from Rwanda and how we should fear the killing fields of conventional medicine; how we should value fast service and convenience above intrinsic quality. All these things are necessary to bring demand for physician services more in line with productive workers’ ability to pay for medical care, and as worker compensation continues to shrink, we may end up with a surplus of doctors, which in turn will make pushing them around and trimming their pay even easier, as Dr. Gottlieb writes in conclusion: “In the future, there will be enough doctors for you to choose from. Problem is, in many cases, the Obamacare health plans won’t pay for you to see them.” And it won’t need to, because by then, you will be conditioned to not demand to see them.

Everywhere on this planet, physicians’ professional status, autonomy and compensation, are inextricably tied to the same metrics for the patients they serve. It is plausible and perhaps understandable that physicians who were, and still are, the highest paid professionals in the land, consider themselves immune to the increased exploitation and marginalization of all other American workers, including highly educated ones. The almost linear relationship between worker compensation and physician compensation, and the mathematical impossibility of becoming rich by tending to a nation of impoverished workers, must have escaped our best and brightest, until now.

The harsh (and unpleasant for some) reality is that unless you can find your way to medically pamper “Internet moguls”, or happen to practice medicine on TV or at the New York Times, you are in the same boat as the McDonald’s workers now rioting in the streets, perhaps in a much nicer cabin (for now), but the same boat nevertheless. Something to ponder upon…