Where does your physician group or health system stand in its network maturity after an EHR implementation and data collection at the point of care? Wellcentive’s Paul Taylor explains.


When it comes to network maturity, where does your organization stand?  If you’re not sure, you’re not alone. Confusion seems to go hand in hand with the proposed reforms promised to remedy U.S. healthcare, as providers have been left with few clear approaches to the process. As a result, organizations have reached a subconscious divide: Some are merely bracing for impact hoping something will change, while others are embracing change hoping to create an impact. So, which side are you on?

No matter. Be you a skeptic, enthusiast, or a little of both, reform is here to stay. However, so too are the tools to restore your faith in the process, says Wellcentive’s Dr. Paul Taylor, CMIO and co-founder of the population health management  (PHM) solutions company located in Atlanta, GA. As a physician of Internal Medicine and Chair of his PHOs Clinical Integration Committee, Taylor is familiar with the struggles providers are dealing with as they strive to implement change. However, it won’t take a miracle to get on the right track. In fact, a model is a good place to start—a model that can help your organization gradually evolve to a greater echelon of efficiency and quality care.

“When it comes to implementing these reforms, we recognize it’s hard to separate the signal from the noise,” said Taylor. “Furthermore, it’s difficult to know where you’re headed without understanding where you really are. That’s why we created the Network Maturity Model. We wanted to provide organizations with a tool that outlines common touch points in the maturity process, so that they could identify with where they are in the process and how to move forward, and ultimately, become a High Performing Network. It gives them a plan for today, but more importantly, it paints the big picture of what they’re trying to achieve over all.”

It’s that big-picture objective that the U.S. healthcare system is counting on and it’s painted with the brushstrokes of what’s at the heart of the maturity model: population health management. Healthcare costs in the U.S are the single largest fiscal challenge facing the U.S. government. We spend more than $8,000 per patient; more than double the per capita cost of any industrialized nation, according to a study released by The Commonwealth Fund in 2012.

Unfortunately, that high cost does not necessarily correspond to high-quality care. The study further revealed that the U.S. has among the highest rates for potentially preventable deaths from asthma and amputations due to diabetes; rates for in-hospital deaths from heart attack and stroke were also no better than average. Without a means to pinpoint and remove those excessive costs through care efficiency and preventive measures, the U.S. system is simply unsustainable. That’s why hitting the Triple-Aim target, to reduce costs, and improve care quality and patient satisfaction, can only be achieved if your arrow is tipped with the pillars of responsible PHM, said Taylor.

“Without actionable data and the outreach tools and techniques to manage chronic diseases, or provide preventative care and care management to your population, you’re not going to create long-term efficiencies within your network,” he said. “That can be a hard thing to remember when you’re first implementing your EMR and focusing on episodic care, but it’s important to realize that’s just the beginning. Those are not the tools that you will be using as a High Performing Network to manage your populations, but you have to start somewhere.”

The Missteps to Progress

It’s those early steps that seem to be leading organizations astray, in fact. Putting all your eggs into one reform basket, or bucket as Taylor calls them, can cause quite a bit of confusion and leave you with lackluster results. For example, expecting too much from your EMR/EHR could leave you evading the true meaning of meaningful use (MU) all together.

It’s no secret that organizations are still struggling with Stage 1 requirements of the incentive program; although registration for MU is increasing, a lot of providers are failing attestation. According to Physicians Practice’s latest survey, only a little more than half of eligible professionals who tried to attest to MU earned the incentive payment, and 15 percent of those who failed were so disheartened they said they may not try again. Equally discouraging is the program’s dropout rate, which rose to 21 percent among family physicians from 2011 to 2012, according to data released by CMS in July. None of these findings bode well, especially when considering the more stringent criteria of Stage 2.

“You need to think beyond the minimum,” said Taylor. You can’t set maturity into motion by merely going through the motions just to meet a set of requirements. You have to put several key pieces in play before all the cogs start working as they should. That being said, you won’t see the ROI you should if you take on too much at once. That’s why you need to plot your progress incrementally, so that you don’t lose stamina or the sightline to your endgoal before getting to that next step.”

So where do you begin? We at HIT Consultant asked Taylor to take us through the four phases of Wellcentive’s Maturity Model (Affiliated, Engaged, Coordinated and High Performing), to get a deeper understanding as to how organizations can use the model as a navigation tool to grow from affiliated-infancy to high-performing maturity, while avoiding some of the pitfalls. Although the model may not remove any growing pains, it can take the sting of uncertainty and confusion out of the process, said Taylor.

Related: Healthcare Network Maturity Model: How Mature Is Your Organization? 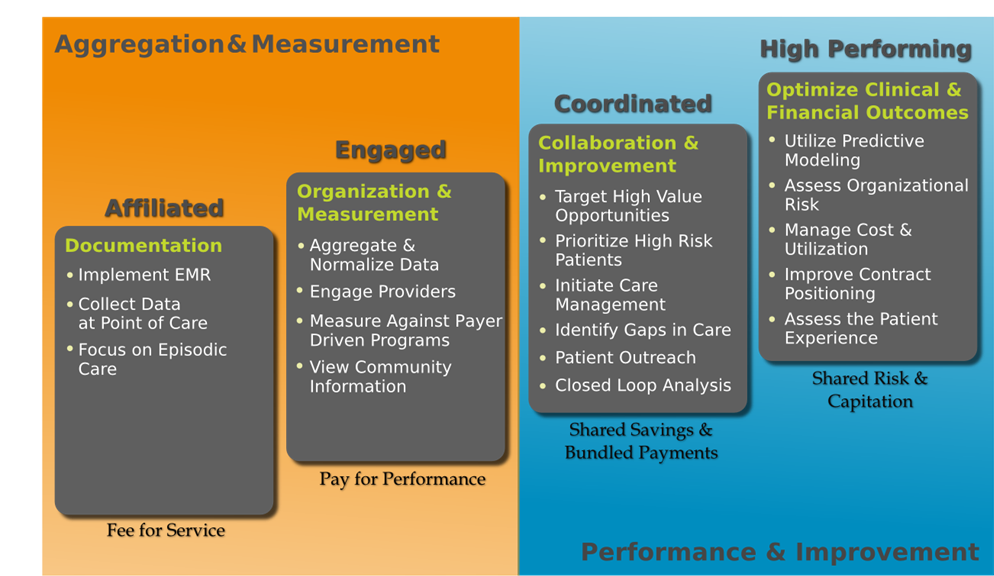 Maturity in Motion: Affiliated to Engaged

If you have implemented an EMR/EHR for your physician group or health system and are collecting data at the point of care, congratulations. You are considered to be at the starting point of Wellcentive’s maturity model as an Affiliated Network, but where do you go from here?“This is how we are striving to set the signal apart from the noise,” Taylor said. “There are some key pieces that you have to put in place before moving on to the next phase. Some things you can do out of order. However, it’s important to know the difference.”

Here are three mission-critical pieces you need to put in place to ensure you are graduating from an Affiliated to Engaged Network in order or necessity:

Data is always the primary building block by which you build meaningful progress. However, not just any old data will do. “We say it all the time, because it’s true. It all comes down to the quality of your data and what you do with it,” said Taylor. “Plenty of data analytics vendors can give you scores of data, but are they aggregating that data from disparate sources, so that you are getting the complete picture of your care delivery? Are those vendors normalizing that data, so that it’s both accurate and begins to paint the picture of actionable interventions and preventative care you will put in place down the line? Are you looking at a focused data set designed to address your specific quality programs, or are you boiling the ocean? Those are the questions you have to ask yourself to know if you’re on the right path.”

And don’t forget the most important question of all: Do you and your physicians trust your data? Do you have faith in it? If you don’t, don’t think about moving forward until you do. “Any steps further will be fruitless because you’re building the foundation for your care delivery on fallacies,” said Taylor. “You have to make physicians the champions of this process,”

You can’t begin to build your physician organization into a high-performing network without fully engaging your physicians in the process.  That seems pretty obvious. However, it’s another oversight you can easily make if you fail to put the right foundational pieces in place— like reimbursement.

“You have to make physicians the champions of this process,” said Taylor. “You cannot execute change efficiently or effectively without doing so. We would like to think that it’s purely altruistic to do the right thing by patients, but that’s not a practical assumption to ensure progress. Showing physicians the amount of performance-based incentives that are risk if they don’t work towards improvement can be a powerful catalyst for change. Don’t underestimate it.”

Letting the light shine on your most engaged physicians can also bring more of them out of the dark, said Taylor. “Physicians can be skeptical, but fortunately they are also competitive. If one physician can be successful by employing these improvement efforts, then they all can.”

You can’t create that healthy dose of encouraging competition among physicians without establishing their progress, however. Thus, it’s equally fundamental that you begin using quality measures and benchmarks to pinpoint your progress. How do the physicians in your network compare with each other?

“Remember, you can’t move forward without first establishing where you are,” said Taylor. “It’s important to share your progress internally and externally. How do the physicians in your network compare with each other? Better yet, how are you measuring up to the provider down the street? If you can answer those questions confidently with the data you collect, then you are truly operating by definition as an Engaged Network, and you’re ready for the next phase.”

Still on the fence about where your organization stands? Taylor said not to worry; it’s not about tying your organization down to a category. “Labels can sometimes be misleading and we recognize that a model centralized around constantly changing processes and technologies can be confusing,” he said. “However, there are key cornerstones to this process that aren’t about to disappear into the shadows of a new technology. We’re not looking to put anyone into a box. In fact, we’re hoping this model can free organizations from their operational silos to achieve the endgoal of PHM. That’s why we’re excited to be talking about this process with organizations, which we’ve been doing for several years now.”

Please join us for our next article with Wellcentive’s Paul Taylor, as we will be exploring the mission- critical pieces that can take you from an Engaged to Coordinated Network.

How will your organization become a high performing network? Click here for a complimentary recording of Wellcentive’s recent webinar, The Population Health Journey: A Practical Guide to Becoming a High Performing Network.