Margalit Gur-Arie writes about the growing dissension between the EHR adoption supporters and those critics who dispute the ROI of EHRs and Meaningful Use.

“In the same day the LORD made a covenant with Abram, saying, Unto thy seed have I given this land, from the river of Egypt unto the great river, the river Euphrates:” —Genesis 15:18

Some four thousand years later, after numerous detours, major scope reductions, tragedies, compromises and constant upheaval, the Promised Land project is very much a messy work in progress. This is the nature of great promises, and in the here and now, we are contemplating yet another, albeit smaller, promise: ““Hospitals, physicians and other health care providers are clearly taking advantage of recent incentives to embrace the promise  of technology [emphasis added],” said John R. Lumpkin, MD, MPH, senior vice president at the Robert Wood Johnson Foundation.”  The Promise of Technology, as you may have guessed, was not made to us by the Lord Almighty, but instead it seems to be a product of spontaneous creation with mysterious origins.

A few years ago, before the incentives mentioned by Dr. Lumpkin became available, there were dozens of EMR vendors trying to sell software to physicians and hospitals, and like every vendor of any product, they were actively and creatively marketing their wares. Save time and money was a common marketing slogan. EMR websites were sporting all sorts of fancy calculators comparing the costs of doing business on paper to doing business on a computer. The costs of new charts, dividers, paper, ink cartridges, each chart pull, forms, printing paper, etc. were carefully added and compared to the almost zero cost of using software instead. Some fancier calculators even factored in the rent for the additional space needed for chart racks. There were estimates of the number of FTEs that could be let go, or used for worthier causes, and the number of additional patients you can see, if you just buy this or that EMR. Some vendors went as far as advertising better care for patients, with advanced features like automated lab results, pre-built clinical templates and clinical decision support. Folks were kicking tires, shopping around and buying when convinced by ads, sales guys and gals, or even a special discount for the month of August. It was a market, like selling beer, or cars.

But then something strange happened. The United States Government became a believer in the EMR vendors’ marketing slogans. Health care was expensive and not as good or as accessible as it could be, and the EMR vendors promise of saving time and money while providing better care was the perfect solution, particularly since nobody else had anything to offer. Thus the Promise of Technology was born with a silver spoon in its mouth, and was immediately and extensively showered with millions and billions of incentives and resources. The messages on EMR vendors’ websites changed practically overnight from preaching to the infidels to preaching to the choir. Get your incentives, guaranteed, or your money back, was the new slogan. It wasn’t like selling beer anymore. It became missionary work. And, like all great mythological promises, the religion based on the Promise of Technology developed its high-priests, prophets, masses of passive followers, skeptics, and blasphemous heathens destined for martyrdom. The Holy Wars are now in full swing.

Obviously, since the Promise of Technology is promoted by the federal government, its campaigns are better coordinated, better funded and better staffed, and often the full color, multi-media splendor is breathtaking. The latest artillery salvo brings to bear the forces of mighty institutions, such as the Robert Wood Johnson Foundation, the Mathematica Policy Research and the Harvard School of Public Health, in a glossy 82 page report cleverly titled “Health Information Technology in the United States: Better Information Systems for Better Care, 2013”. The report, which does not address either better systems or better care, is a lengthy and multifaceted analysis of the highly successful Meaningful Use program and its effects on EHR technology prevalence and composition in the U.S.  To support the main front, Health Affairs published the research papers and convened a media event to showcase “Health Information Technology Adoption & Use” at the National Press Club in Washington, DC, featuring a star studded panel of experts, heavily promoted through social media, articles, and even national radio. This was the most impressive display of firepower superiority to date.

Basically, the loudly broadcasted, and widely amplified, drumroll is that the Meaningful Use program is working exceedingly well, everybody is buying EHRs and although many “challenges” remain, we are resolutely moving forward, and the Promise of Technology is certain to be fulfilled at an unspecified date in the future. Ample data was presented from multiple sources, processed through multiple software analytics packages, resulting in tables, bar charts, line charts and scatter plots, showing that the prevalence of EHRs of a particular type most conducive to Meaningful Use has increased by 12.4% among physicians and by 28.9% among hospitals since 2010 when the Meaningful Use program commenced and all EHRs were required to be able to support it. This is a very specific way of analyzing EHR adoption numbers, but we need not quibble with the details here. In addition, the Medicaid program for the poor paid out $4.2 Billion to almost 80,000 eligible professionals and 3,000 hospitals for adopting, implementing or upgrading their EHR, and $820 Million dollars to 8,187 eligible professionals and 1,197 hospitals for actually meeting Meaningful Use requirements by February 28, 2013.

The non-believers come in many flavors and as always in history, are disorganized, fearful, delusional and in violent disagreement with each other. There are those who question only the particulars of the Technology, but basically believe in the Promise, and very carefully profess their deep belief in magic in every article or opinion piece criticizing the current state of Technology. This is a very diverse group ranging in interests from those who aspire to be the high-priests of a new (e.g. open-source, modular, iPad based, interoperable) Promise of Technology to those who just want a more transparent way of managing the journey to the Promised Land.  This group has had some limited success in changing the official rhetoric and in obtaining lucrative positions for its better connected leaders. Then there are the heretics who question the Promise itself in studies or opinion pieces, searching for an ounce of evidence that the Promise will actually be fulfilled. Those are summarily burned at the stake.

Related: EMRs Should Not Be Held Responsible For Fixing the Healthcare System

And then there is a silent majority that is just trying to survive and pay the bills, but sometimes is compelled to vent anonymously on social media forums, with no tangible results. Once in a while there are skirmishes on the ground like the Affinity Medical Center RNs in Massillon, Ohio who went public with their call to delay EHR implementation, or the California Nurses Association press release highlighting the safety and patient care issues caused by a new EHR at Sutter corporation East Bay hospitals, which stand in stark contrast to the official line: “Electronic Health Records Seen as Key Tool for Hospital Nurses”. These things make the industry headline news for a few days and then are promptly eclipsed by some other spectacular fireworks display from the Promise of Technology bottomless arsenal.

As of June 2013 CMS has paid out over $15.5 Billion in combined Medicare and Medicaid incentives to wealthy individuals and corporations, and spent hundreds of millions more in grants, operations and consent manufacturing efforts. The day quickly approaches when the Promise of Technology will be running out of cash to sustain enthusiasm of the masses for the projected decades-long trek through the desert, but resourceful leaders should manage to elicit additional infusions of dollars by hitting various budget rocks really hard, and perhaps other miracles will occur as well. 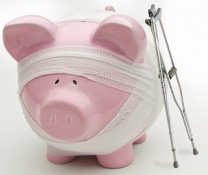 And then there are the poor, the sickest and the most vulnerable; those who pay the highest price before, during and in the aftermath of all Holy Wars. The White House has a map on its website to answer a simple question: “How will the sequester hurt your state?”, and hurt it will. Tens of thousands of children will not be receiving immunizations, millions of dollars in disaster relief will not be available, thousands of teachers will be fired, millions of meals will not be delivered to sick and homebound seniors, clean air and water will no longer be protected, thousands of schools will not be able to help children who are poor, disadvantaged or have special needs and early education for poor kids will be practically eliminated. A map of local reactions and reports from all over the country is maintained by the Center for American Progress.

There are also the poorest of the poor, the schoolchildren on military bases and Native American reservations whose lives are being derailed for the lack of $67 million, which is 20% of what CMS paid out in Meaningful Use incentives just in the month of June. No, the Promise of Technology did not cause sequester cuts, but it’s not like the billion dollar bills spent on Meaningful Use are rigged to explosive devices designed to blow up if misused to help a child in need either.