Margalit Gur-Arie provides a compelling look into spinning EHR adoption numbers of office based physicians, hospital, and Meaningful Use reports from the HHS.

On May 22nd, the Secretary of Health and Human Services (HHS) published a momentous press release announcing that“Doctors and hospitals’ use of health IT more than doubles since 2012”. The release was accompanied by two beautiful graphs, one for physicians and one for hospitals, titled“Adoption of Electronic Health Records by Physicians and Other Providers” and“Adoption of Electronic Health Records by Eligible Hospitals”, respectively. Both graphs, shown below, start at zero (0) adoption in January 2011 and climb rapidly to“[m]ore than 291,000 eligible professionals and over 3,800 eligible hospitals” by April 2013.

Of course, the graph titles are incorrect, since there were plenty of electronic medical records in use well before 2011, and the actual text of the press release does make some references to the world prior to 2011 (more on that below). The White House, eager to display such enormous success, posted the announcement on its own blog and fixed the titles to indicate that these are graphs depicting distribution of HITECH incentives for Meaningful Use, not necessarily Electronic Health Records (EHR) adoption rates as HHS mistakenly labeled them.  And while at it, the White House blog saw fit to make the pictures a bit narrower so the growth slope is properly showcased. 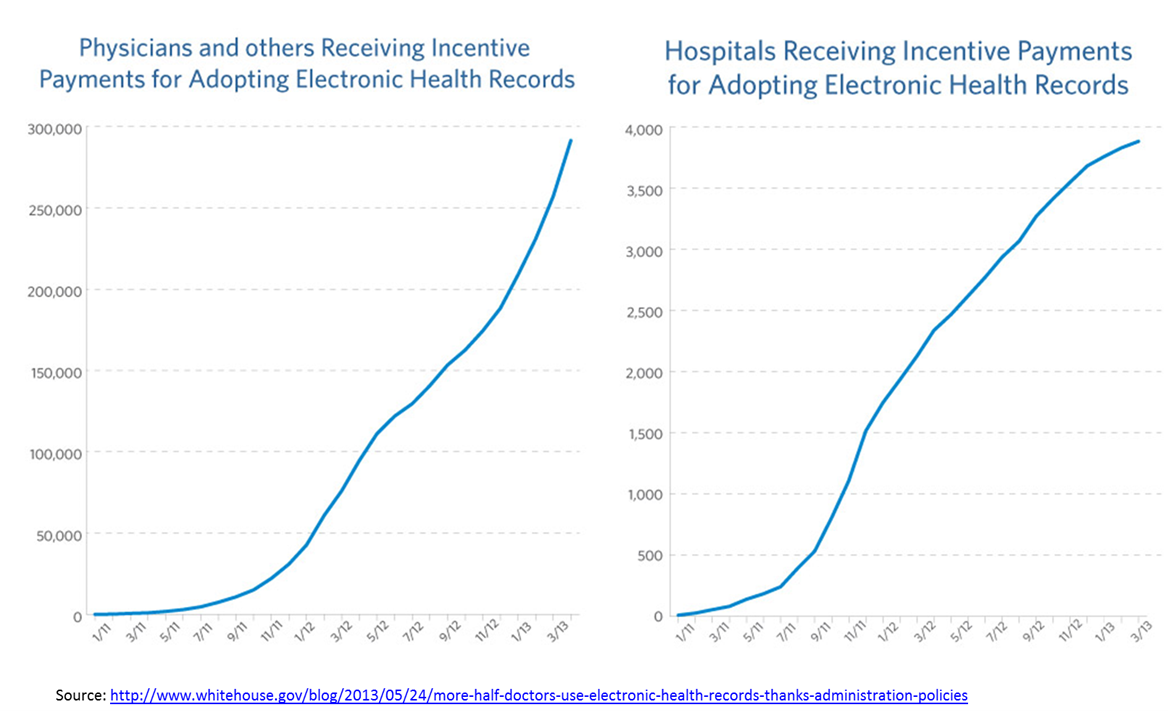 The problem with these graphs, whether in wide or skinny format, is that they mean absolutely nothing, except that HHS was awfully busy dolling out incentives between 2011 and today. Thankfully, the HHS press release is attempting to shed more light on the actual adoption rates of EHR. Let’s look at the ambulatory sector first, and then examine EHR adoption in the hospital market.

Related: Improve EHR Adoption By Starting At the Beginning

The HHS press release states that, “[a]ccording to the Centers for Disease Control and Prevention (CDC) survey in 2012, the percent of physicians using an advanced EHR system was just 17 percent in 2008. Today, more than 50 percent of eligible professionals (mostly physicians) have demonstrated meaningful use and received an incentive payment”. Examining the 2012 CDC survey results, shown below, it turns out that when talking about “advanced EHR”, HHS is referring to what CDC termed “basic EHR”, which is fine as long as we translate correctly. 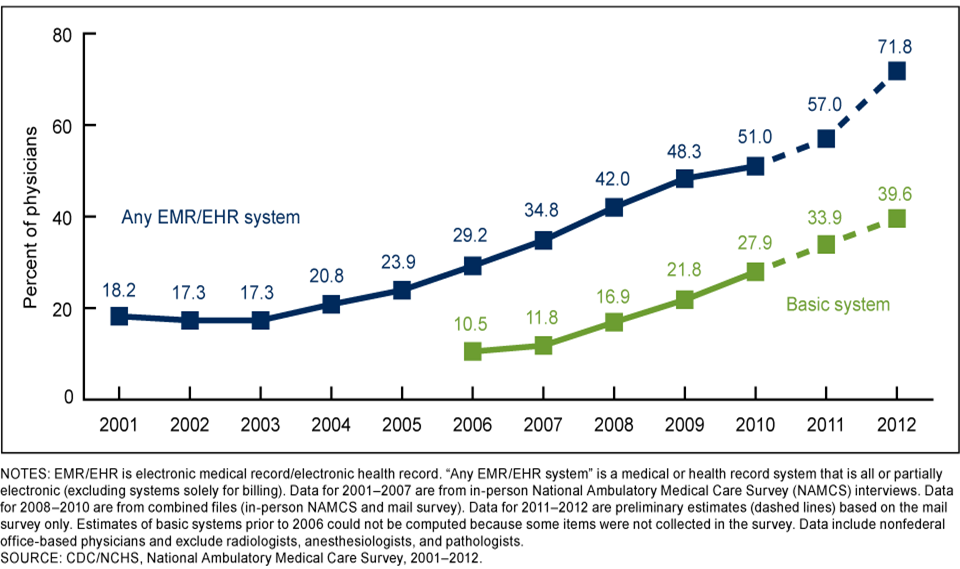 The CDC survey results clearly show that somewhere around 2004 EHR adoption among office-based physicians began climbing at a more or less constant rate, with over 40% of doctors using an EHR back in 2008, although most were probably missing this or that functionality classified as basic by the CDC (and advanced by HHS). Beginning in 2008, prevalence of Meaningful Use worthy EHRs (advanced/basic) began increasing at a similar rate. If we place the 50% adoption rate of 2013, inferred from payment of incentives by HHS, on the CDC green line graph, it should fall into the same linear growth behavior as previous years. We will have to wait for the 2013 CDC survey, but my guess would be that while the blue “Any EMR/EHR System” line will flatten significantly, the green line will shoot up and eventually converge with the blue one. The reason for this is that there really are no serious EHR products today that don’t fit the “basic/advanced” criteria, and most people that have a non Meaningful Use compliant EHR, are upgrading to a version that has all the bells and whistles.

So what can we say about the effects of the HITECH incentives on EHR adoption in the ambulatory market? First of all, we can say that the HHS press release title claiming that “use of health IT more than doubles since 2012” is completely false. If “use of health IT” (the blue line) doubled, we would have over 150% adoption. If we understand “health IT” to mean Meaningful Use compliant health IT (the green line), and say that it doubled, we should have close to 80% adoption, which we do not have. We can’t even say that HITECH incentives increased the rate of adoption of “health IT”, since the slope of overall adoption hasn’t changed much since 2004. We could say that Meaningful Use incentives encouraged increased adoption of, and upgrades to, more “advanced/basic” EHRs, starting in 2008, a full two years before Meaningful Use criteria were finalized. Perhaps we could speculate and say that without incentives, the recession would have taken its toll and rates of adoption would have fallen, so the Meaningful Use program propped the market during hard times. This actually makes sense. Or we could just be honest and say that HHS paid lots of incentives really quickly, mostly to folks that “adopted” much of their health IT before the program was defined.

The hospital EHR adoption figures are even more dramatic. According to the HHS press release, “[f]or hospitals, just nine percent had adopted EHRs in 2008, but today, more than 80 percent have demonstrated meaningful use of EHRs”. The 9% figure for 2008, presumably comes from a 2008 survey commissioned by HHS and published in NEJM in 2009 (no source is provided in the press release). The researchers found that 1.5% of hospitals had “comprehensive” systems and 7.6% had “basic” systems, where comprehensive and basic as defined in the survey could be indicative of ability to satisfy the eventual criteria for Meaningful Use. Going from 9% EHR adoption to 80% EHR adoption for hospitals in 5 years would indeed be a miraculous feat. However, when it comes to hospitals, EMR is not a question of yes EMR or no EMR, but rather of how much EMR is deployed or used. Fortunately, the Healthcare Information and Management Systems Society (HIMSS) defined an EMR Adoption Model (EMRAM) for hospitals and it has been maintaining a lovely analytics database since 2006. The EMRAM defines eight EMR adoption stages, with Stage 0 indicating that the facility has not fully computerized even the three basic ancillary services (labs, radiology, pharmacy) and Stage 7 indicating full implementation of the most comprehensive EMR possible, including data warehousing and full interoperability.  Below is a compilation of the distribution of hospital EHR status from 2006 to the end of March 2013. 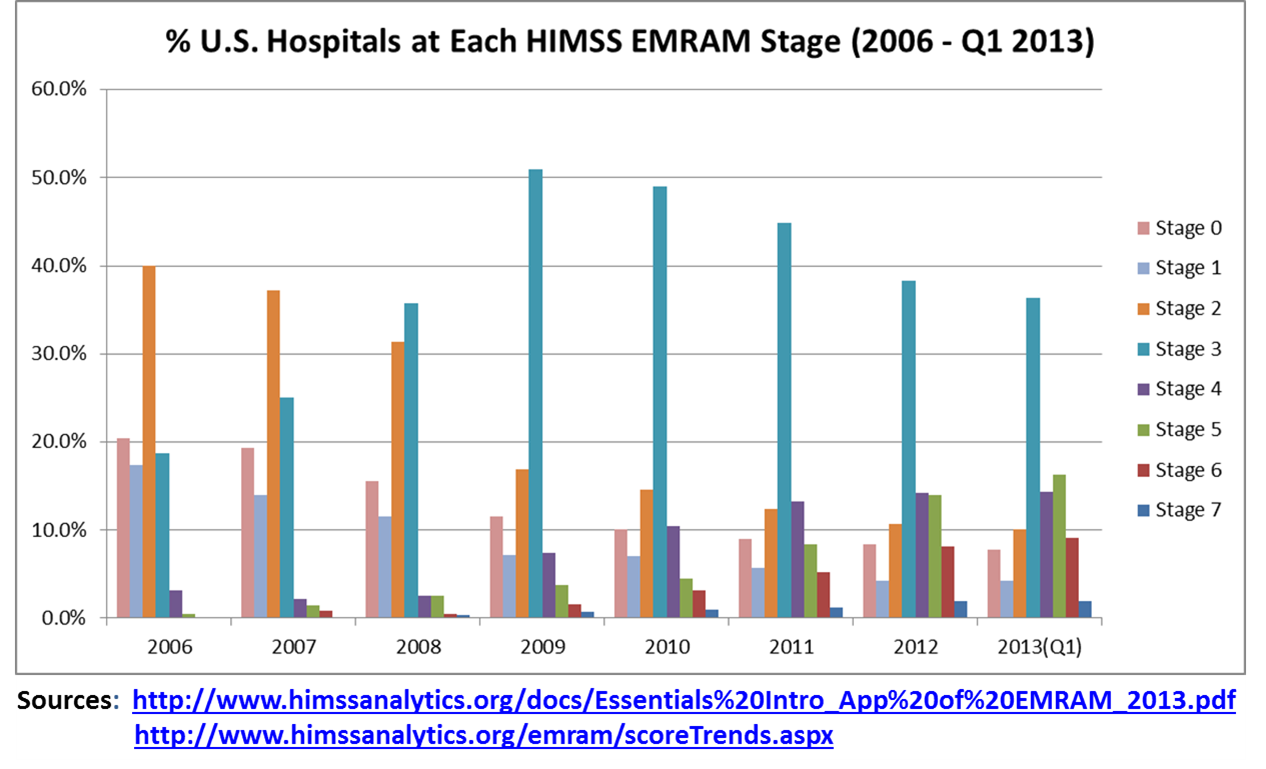 Unlike the ambulatory market, it is very clear that something major occurred between 2008 and 2009, with lots of hospitals transitioning from EMRAM Stage 2 to Stage 3 (most likely by adding PACS and nursing notes), and the transition to higher EMRAM Stages also began picking up pace around the same time. OriginallyHIMSS estimated that EMRAM Stage 3 would be required for initial Meaningful Use compliance and possibly Stage 4 (which includes CPOE). Isolating the number of hospitals that reached EMRAM Stages 3, 4 and above, yields the following results: 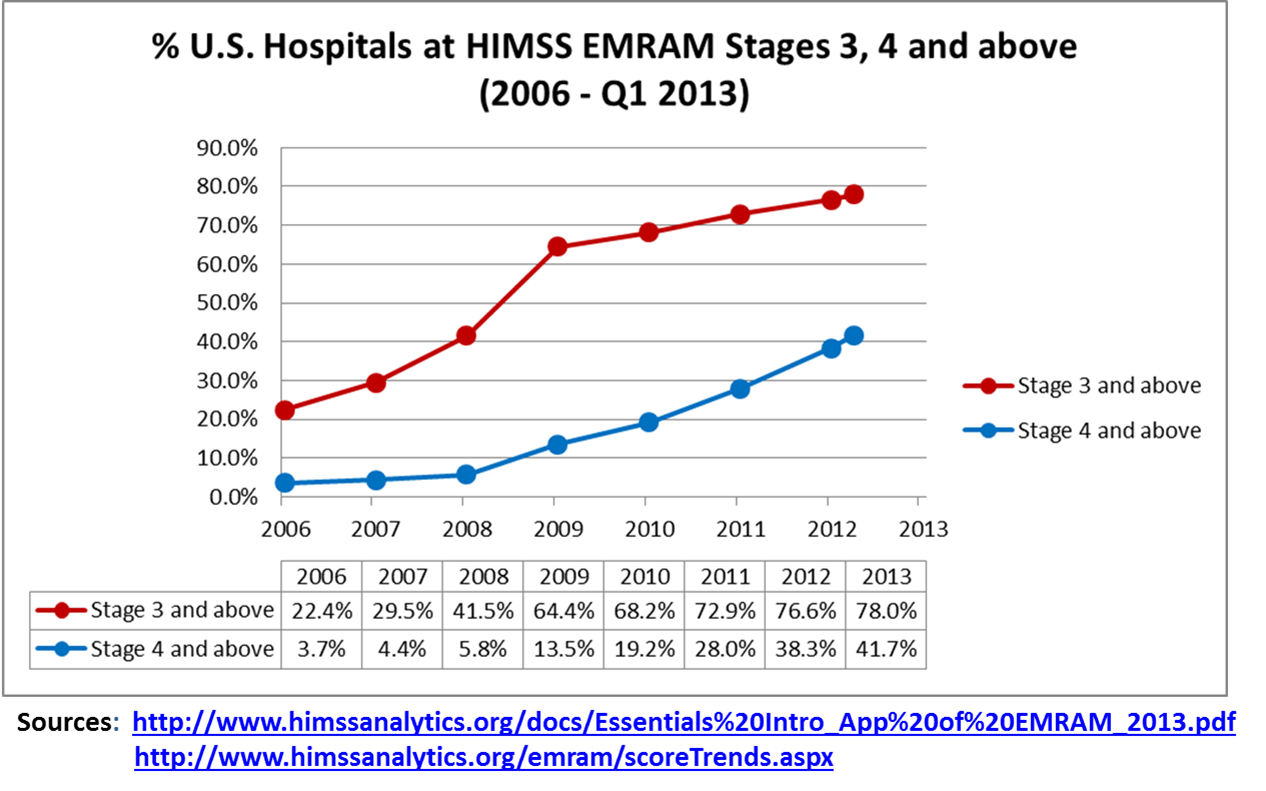 Since HHS announced that 80% of hospitals received Meaningful Use incentives by the end of Q1 2013, obviously EMRAM Stage 3 was sufficient for obtaining EHR incentives. Looking back at 2008, over 40% of hospitals were already at EMRAM Stage 3 at that time, a far cry from the 9% cited by HHS, so the best HHS can state is that between 2008 and 2013 the number of hospitals with a Meaningful Use compliant EHR doubled, which is a solid achievement in my book. HHS could have also pointed out the dramatic increase in the number of hospitals that deployed CPOE and advanced clinical decision support (EMRAM Stage 4), and the accelerated advancements to Stages 5 (closed-loop medications administration) and 6 (physician documentation), all very impressive even if not completely related to the current incentives.

Instead, the compulsive need to spin everything prompted HHS to declare that “use of health IT more than doubles since 2012”, which is ridiculous, and to put forward questionable historical numbers. A more cautious White House, while sticking with HHS provided numbers and crediting the President with this miracle, declares for no apparent mathematical reason that “adoption of electronic health records doubled among office based physicians from 2008 to 2012 and quadrupled in hospitals”. Of course every industry publication and health policy pundit (not to mention Twitter) is repeating these things, including the New York Times, where Mr. Thomas Friedman in a customary fact-free infomercial for his investor buddies is stating: “According to the Obama administration, thanks to incentives in the recovery act there has been nearly a tripling since 2008 of electronic records installed by office-based physicians, and a quadrupling by hospitals”. So which one is it folks? Doubled? Tripled? Quadrupled? Something bigger? Does it matter?

« Canadian Hospital Launches Mobile Health App for Veterans with OSIs
North American Health IT Market Forecast to Reach $31.3B by 2017 »