New Google Glass app assists rapid response teams at hospitals with the ability to live stream video, along with vital signs, to a doctor or specialist.

What if Google Glass was used to provide a first-hand view of the patient bedside along with data such as vital signs and blood pressure? A new digital health startup called Farlo(Italian for “do it”) that uses wearables to save lives has developed their first product, aRRTGlass that employs Google Glass in a novel Rapid Response Team management solution for hospitals. The startup is banking on the potential of Google Glass to enhance the transformation of healthcare.

According to serial entrepreneur John Rodley, CEO & Founder of Farlo,

“I think there’s a major shift going on in society about where computing happens and what it does, driven by increasing miniaturization, progress in communication standards, longer battery life and lower power consumption.  Glass is part of that shift, but it’s not the cause.  We want to ride that shift and are anxious to talk to anyone who has ideas about how that shift will play out in healthcare.”

Rodley has previously served as CTO/technical co-founder at Radius Partners and Roam Data that were both acquired for successful exits.

Related: Is Google Glass The Future of Connected Health?

Role of a Rapid Response Team

When a patient demonstrates signs of imminent clinical deterioration, a team of providers is summoned to the bedside to immediately assess and treat the patient with the goal of preventing intensive care unit transfer, cardiac arrest or death. These teams of providers commonly known as ‘rapid response teams’ has been shown to decrease hospital mortality and cardiopulmonary arrests outside of the intensive care unit (ICU). According to a study conducted by Lucile Packard Children’s Hospital, rapid response team implementation decreased their monthly mortality rate by 18 percent and code rate by 71 percent, improving overall clinical outcomes.

Instead of waiting until a provider arrives at a patient’s bedside, a nurse wearing Google Glass and using aRRTGlass would be able to live stream video, along with vital signs, to the doctor or specialist who is on the way over.”It gives them the first-person view of what’s happening at the bedside, along with data like heart rate and blood pressure. If they can’t see it, they’re not going to venture an opinion about the appropriate treatment until they get there,” he says. Providers also have the ability to ask questions and communicate with the caregiver who is in the patient’s room improving care coordination and patient engagement.

Below is some EKG data that the responding doctor could see on their Glass display, and an image of the desktop “base station” view of all the video and data being sent through the ArrtGlass system. 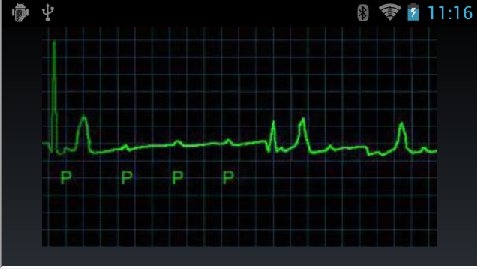 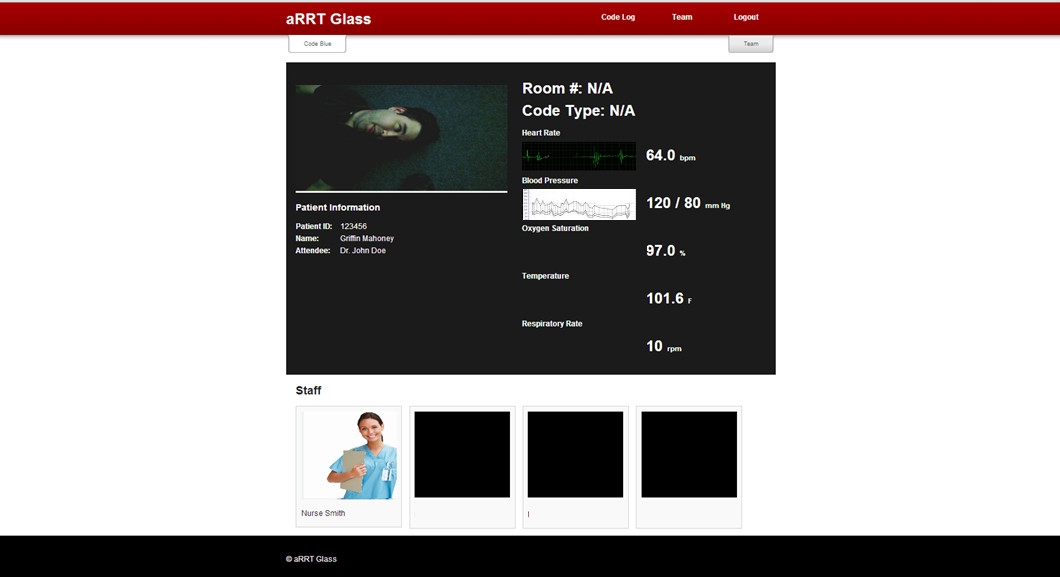 There are a number of potential HIPAA and security questions/concerns surrounding the future application of Google Glass in the healthcare setting. John feels that the current debate over privacy and security starts on the wrong premise.

“Healthcare professionals would use Glass in an HIT setting the same way that a consumer wandering through a national park would – i.e. through the Mirror Interface.  Glass is hardware, an operating system and software.  The hardware is the enabling technology; the software and operating system are more application specific.  If you don’t want to put videos on YouTube, use different software.  The same as with any OTS technology you use in healthcare.  You don’t use OTS software, you customize it to the particular application,” said John Rodley.

The startup provided their first demo of the product recently at AngelHack Boston 2013, a competition for entrepreneurs and web developers. The team of four, led by Rodley, is continuing to develop the product with plans for a pilot version available for testing later this year.

For more information about Farlo and their aRRTGlass product, please contact directly John at john@farlo.co and @farlohealth on Twitter