35% of HIT senior management & executives identify meaningful use as the top area where Health IT will achieve the most significant improvements over the next 12 months, according to a survey conducted by Stoltenberg Consulting at the recent HIMSS13 conference in New Orleans, LA. Survey respondents included HIT management, physicians and clinicians representing healthcare providers and payers, government agencies and HIT services vendors, among others.

“Those hospitals that can successfully achieve meaningful use implementation will benefit greatly from the resulting updated systems, enhanced processes and increased data security,” said Shane Pilcher , vice president of Stoltenberg Consulting. He also warned that “organizations still need to overcome the hurdles inherent in meeting meaningful use however, before they can reap the benefits of it.”

Survey respondents identified the following three greatest challenges in fulfilling meaningful use requirements in their organizations: 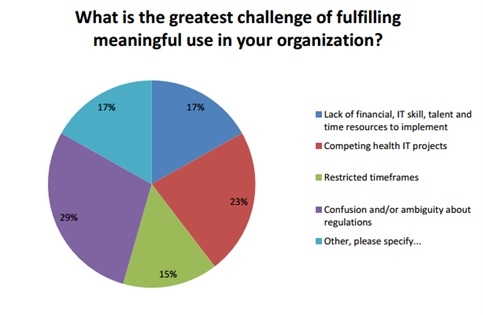 “To have the best chance of meeting meaningful use, smaller hospitals should develop an effective plan of action that unites IT, internal administration and clinical providers,” noted Pilcher.

Emerging Health IT Trends
The survey also revealed the top three issues likely to dominate HIT dialogue for the remainder of 2013:

These three areas have the ability to make a positive impact on a healthcare organization’s bottom line. However, they require an extensive knowledge and expertise that might be meet through consulting with a preferred IT consulting firm.

In fact, according to the Stoltenberg survey, the issues or problems that HIT executives would most likely consult with a specialized IT consulting firm to resolve are: 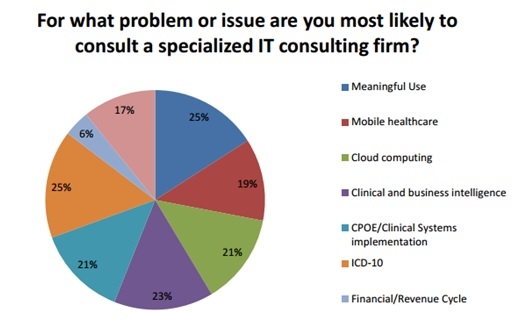 Given the complexity, time constraints  and lack of resources there is no question why ICD-10 and meaningful use are the leading concerns for HIT executives over the next 12 months.