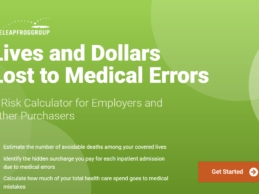 The Leapfrog Group, a nonprofit organization dedicated to quality and safety in healthcare has announced the release of its new Lives and Dollars Lost to Medical Errors Calculator, a new tool that illuminate the impact medical errors have on an employer’s covered population. Originally launched in 2013 as the Hidden Surcharge Calculator, the new interactive tool allows purchasers to estimate the number of avoidable deaths among covered lives; how much they spend annually due to medical errors
END_OF_DOCUMENT_TOKEN_TO_BE_REPLACED