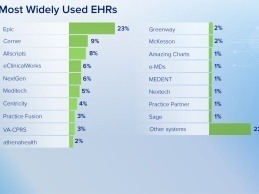 Medscape EHR Report 2014 reveals the top 5 most widely used EHRs by physicians  Epic, Cerner, Allscripts, eClinicalWorks and NextGen have been named the most widely used EHRs by physicians, according to Medscape's EHR Report. Epic continues to dominate the EHR market for hospitals and health systems with 37% of users, nearly three times as many as Cerner with 13% of hospital users. eClinicalworks was rated first in usage (10%) and NextGen and PractieFusion tied for second place with 8% each for
END_OF_DOCUMENT_TOKEN_TO_BE_REPLACED