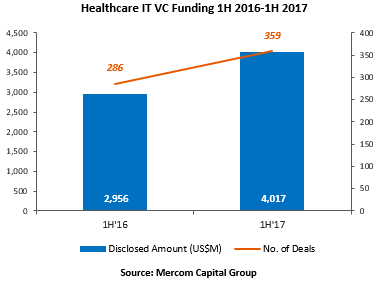 Health IT VC funding reached a total record of $4B in the first half of 2017, representing a 36 percent higher year-over-year, according to a new report from Mercom Capital Group.  The latest report finds that there were a total of 90 Healthcare IT M&A transactions, compared to 110 in 1H 2016. M&A activity in the second quarter of 2017 was down with 41 M&A transactions (five disclosed) compared to the 49 M&A transactions (seven disclosed) in Q1 2017.

Mercom’s comprehensive report covers healthcare IT and digital health deals of all sizes across the globe, which finds that 2017 is shaping up to be a blockbuster year globally for Healthcare IT / Digital Health funding thanks to record numbers in both the first half and second quarter of the year. Uncertainty may surround the future of the Affordable Care Act in the United States, but investors remained bullish on healthcare IT companies in the U.S. with a record quarter for Healthcare IT / Digital Health funding.

Key healthcare IT VC funding highlights in H1 2017 include:

– Practice Management Solutions and Data Analytics companies were involved in the most M&A transactions in Q2 2017 with five each, followed by Medical Imaging companies with three transactions.