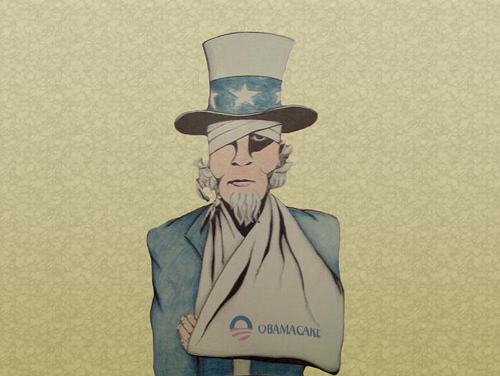 “So how about it, Nash? You scared?”
“Terrified… mortified… petrified… stupefied… by you.”  (–A Beautiful Mind)

Fear is now a sign that you are an intelligent, educated, open-minded and caring person. Being scared is incontestable proof that you have a beautiful heart. When it comes to your health, there is palpable terror that soon, very soon, the bad guys will take away Obamacare, which was the source of health care and life itself for many. And make no mistake the enemy is coming for us all, now that we lost the war to “the Republicans”. It is therefore incumbent upon brave souls everywhere to join La Résistance Américain. Since I am not now and never have been a brave souled Maquisard, I’ll just sit here and daydream about a kinder and gentler occupation, until the Vichy comes for me.

Obamacare is the Status Quo

Obamacare went into effect only three years ago, but in the age of information technology, years are like decades. Obamacare with its many tentacles and offshoots is deeply and solidly entrenched in the health care landscape. There is zero chance that anybody will be able to dig up its rhizomic growth into the actual practice of medicine, so let’s play along and see what can be done about the large shiny part, visible to the naked eye, namely health insurance.

Health insurance for all classes now includes a fixed set of “essential benefits”, no limits on lifetime spending and prohibition from factoring preexisting conditions into coverage decisions has been expanded to include non-group policies. This is the post Obamacare status quo. This is what the Republican Party is currently endeavoring to repeal and replace. It is important to note that while approximately 95% of Americans are eligible for either fully or partially subsidized health insurance, there is a 5% “donut” hole of mostly middle class, mostly precariously employed people, left to fend for themselves.

Democrats are poking fun at Republicans for lacking an Obamacare replacement plan after six years of complaining and symbolically voting to repeal the law multiple times. The irony here is that the GOP has plenty of plans that could have been put in place in 2008 and even in 2012, but not today. Why? Because none of the old plans are equal, let alone better, than the new status quo. The simple fact is that on its face, and for the short term, Obamacare helps far more people than it hurts. The other simple fact is that the one overriding fiduciary responsibility of members of Congress is to get themselves reelected.

The Basic Laws of Repeal and Replace

With that in mind and considering that for some peculiar reason getting rid of Obamacare was a major campaign promise for both the GOP and the new President, I would like to humbly suggest an entirely scientific set of basic laws for repealing and replacing Obamacare.

If this law sounds to you like some sort of ridiculous wizardry, it isn’t. There are plenty of places to look for, and find money, other than working people’s pockets. Additionally, failure to comply with this basic law will guarantee loss of elected office for anybody remotely associated with such folly. Equivalently, perpetual election machines of the first kind (hurting people) are impossible.

Fix what the people say is broken, not what dead economists might have said is broken. Premiums, especially for unsubsidized people, are too high. Deductibles are way too high not just for those who have to pay full price for insurance, but increasingly so also for employer sponsored workers. Choice of doctors and hospitals is being narrowed for everybody, except the very rich and the very well connected. Those are the three things that voters need Congress to fix.

Blabbering about death spirals and actuarial risk pools will get you zero (0) votes in your next election. Reducing Federal government spending on health care by a few billion dollars means nothing (0) to voters who have to cover the shortfall from their own individual pockets or go without. Equivalently, perpetual election machines of the second kind (ignoring people) are impossible.

Do not lie to the American people and do not use words you don’t fully understand just because self-described experts use those words often in casual conversation. Don’t tell people that their health care will be affordable if they open another empty savings account. Don’t insult the intelligence of sick people by telling them that if they band together with other very sick people they’ll be able to buy more affordable health insurance.

Do not tell States that cutting Federal support for Medicaid will finally free the States to innovate. First, the “dishonest” press will roast you alive, and second, your “base” of forgotten men and women will be forgetting all about you. Equivalently, perpetual election machines of the third kind (deceiving people) are impossible.

Based on the four simple laws above, I would like to submit one possible sequence of broad steps to “repeal and replace” Obamacare.

– Step 0: Get rid of the individual mandate. It is irksome to many, it accomplishes nothing, and it’s already gone anyway. This, in and of itself, satisfies the minimum requirement for stating that Obamacare has been repealed.

– Step 1: Take a baseline of who has what in the way of health insurance, and this includes covered benefits, because reducing health insurance prices by cutting benefits violates the First and Third Laws.

– Step 2: Exclude programs where Obamacare changed little to nothing. Ignore the small changes and per the First Law, leave expansions in place.

– Medicare, VA and other military related – Leave those out. Fix the VA separately.

– Medicaid – Leave it alone, except make sure the remaining Republican governors expand it in their (your) states (threats, waivers and whatever it takes to help them save face).

– Employer insurance – Leave the 26 years old children and the removal of lifetime limits in place because neither one makes much difference to affordability (preexisting conditions were never an issue for this group).

Now we’re down to about 18 million insureds in dramatically different situations. Half are subsidized to various degrees based on their Federal Poverty Level (FPL). People with less than 400% FPL (a bit south of $50,000 per year) get some form of subsidy for the premiums, but many are struggling with outrageous deductibles. Those who make less than 250% FPL get help with their high deductibles as well.

The 9 million who pay full price, along with 7 million of the uninsured, are in desperate need of relief from Obamacare. Add to that an increasingly large portion of employees whose employers “offer” exceedingly high deductible plans, and you have your Obamacare resentment in a nutshell.

– Step 3: The easiest and cheapest solution to the problem would be to allow people on the individual market to purchase Medicare coverage and direct all Federal subsidies (which will need to be spread out more broadly to include the 10% “donut” hole) back into Medicare.

There should be no objection from the health insurance industry since they all seem eager to leave those tiny markets anyway. But of course, nobody is going to do that, because this would appear to be “government run health care” of the “socialized medicine” variety.

– Step 3 (alternate A): Allow all subsidized people on the Obamacare exchanges to “buy” into local Medicaid plans, which should reduce cost significantly, and use the savings to broaden the subsidies to include the hurting half, with an option to get more “coverage” if they use those new subsidies to buy into Medicaid as well.

Personally, I don’t find this alternative very appealing, certainly not as appealing as the Medicare option, but again, seeing how all Medicaid is privatized now and how health insurers are making fortunes from Medicaid, there should be no serious objections. This alternative violates the Second Law when it comes to choice of doctors.

– Step 3 (alternate B): If increasing membership in Medicare or Medicaid (or both) is too much of a political hot potato (and it is), let’s use some of those buzzwords y’all enjoy throwing around to create a market-based solution. We have around 18 million people who participate in the individual market and perhaps another 13 million who fit the profile, but choose not to participate. We are talking about at most 10% of Americans.

– One generously subsidized HMO plan with an adequate but narrower network, which is essentially a Medicaid style option, but more expensive (go figure).

– One less generously subsidized PPO plan with a comprehensive network, which is similar to a Medicare Advantage PPO.

– You can add in your “health savings accounts” here, but only if they are fully or partially funded by the Federal government in lieu of direct payment to insurers. This is also a good place to experiment with subscription based comprehensive care, a.k.a. direct primary care (DPC), which introduces a small element of free-market competition into the health care delivery system.

– Step 4: Limit employer high deductible plan offerings, because what is a reasonable deductible for the CEO, is most definitely not reasonable for the assembly line worker. If you think Obamacare is a huge problem now, wait until the employer health insurance sector collapses, and it will if left to its own devices. Yes, fully funded health savings accounts (and DPC) could be used here as well.

– Step 5: If you are serious about providing relief to all the people, the government cost for replacement will be higher than the current Obamacare costs. To reduce health care insurance prices, you will need to consider the Zeroth Law of R & R and intervene in the pricing of health care products and services, such as drugs, devices, technology, regulations, the predatory environment created by consolidation of health systems, and the deprofessionalization of physicians.

Since all sides in this debate have strong ideological convictions or equally powerful financial interests, preventing them from civil collaboration, the most likely result of this R & R effort is that the people will end up getting hurt, again. But if the 2016 election wasn’t a clear enough message for you, here is another Nobel Prize worthy message attributed to John Nash (or rather the writers of A Beautiful Mind):

“If we all go for the blonde and block each other, not a single one of us is going to get her. So then we go for her friends, but they will all give us the cold shoulder because no one likes to be second choice. But what if none of us goes for the blonde? We won’t get in each other’s way and we won’t insult the other girls. It’s the only way to win. It’s the only way we all get laid.”