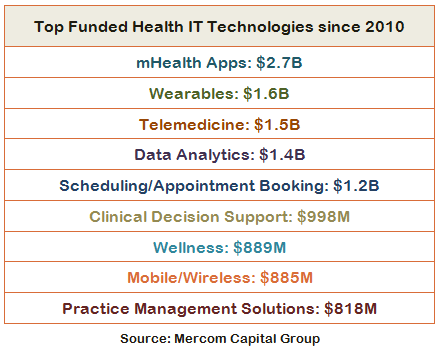 mHealth Apps ($2.7B), wearables ($1.6B), telemedicine ($1.5B), data analytics ($1.4B), scheduling/appointment booking ($1.2B), clinical decision support ($998M), wellness ($889M), mobile/wireless ($885M), and practice management solutions ($818M) is the top funded health IT technologies since 2010, according to Mercom’s Annual and Q4 2016 Healthcare IT Funding and M&A Fact Sheet. Mercom’s comprehensive report covers healthcare IT and digital health deals of all sizes across the globe.

Since 2010, the sector has received $18.5 billion in VC funding in 2,672 deals and almost $7.5 billion in debt and public market financing (including IPOs), bringing the total funding for the sector to $26 billion.

IPOs in 2016:
– NantHealth, a cloud-based healthcare IT company delivering care through a single integrated clinical platform, raised $91 million through its IPO. The shares are listed and began trading on Nasdaq in June 2016.

– Tabula Rasa HealthCare (TRHC), provider of a cloud-based medication decision support and e-prescribing platform, brought in $51.6 million through its IPO. Tabula Rasa’s shares are listed and began trading on Nasdaq in September 2016.

– Oneview Healthcare, a provider of patient engagement and clinical workflow solutions to healthcare facilities, raised $46.5 million through its IPO. The shares of Oneview started trading on the Australian Stock Market through CHESS Depository Instruments in March 2016.