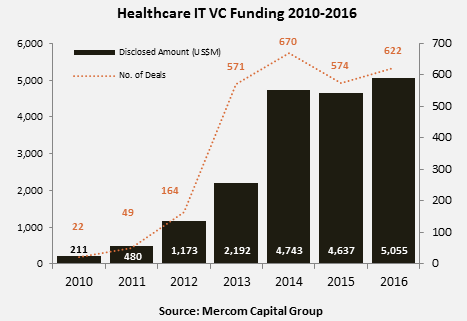 Health IT VC funding set a new milestone in 2016 as it eclipsed $5 billion in 622 deals, compared to $4.6 billion raised in 2015 in 574 deals, according to that latest report from Mercom Capital Group. The report finds that total corporate funding in health IT companies – including debt and public market financing (plus IPOs) from a total of 1,115 investors (including accelerators/incubators) – came to $5.6 billion in 2016, a drop of 30 percent compared to $8 billion in 2015.

Since 2010, the sector has received $18.5 billion in VC funding in 2,672 deals and almost $7.5 billion in debt and public market financing (including IPOs), bringing the total funding for the sector to $26 billion.

4. The top VC investors in 2016 were Khosla Ventures with seven deals followed by GE Ventures, Social Capital, and BlueCross BlueShield Venture Partners with six deals each.

9. In the last five years, 206 companies have made multiple acquisitions led by IMS Health with 12, and CompuGroup Medical and iMedX with 10 each, Quality Systems with nine, Emdeon and McKesson with eight each, and athenahealth, GE Healthcare, PracticeMax, and TELUS HEALTH with seven each.