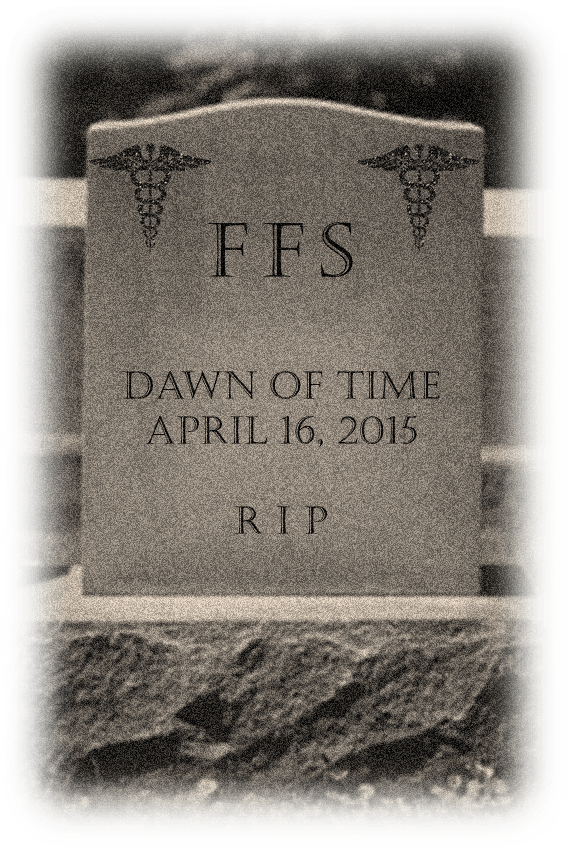 On April 16, 2015, President Obama signed into law H.R. 2, the Medicare Access and CHIP Reauthorization Act of 2015(MACRA), effectively sentencing Fee-for-Service (FFS) to death. The best explanation for how FFS is destroying the nation comes from Charles Munger, vice-chairman of Berkshire Hathaway and ad-hoc health luminary, who is equating what American doctors do, to raising rattlesnakes so they can collect the bounty for dead rattlers offered by the government in an effort to combat a growing snake problem. Based on this, and other equally compelling insights, FFS was found responsible for willful destruction of our great nation.

A few months before Congress delivered its coup de grâce to the FFS system, the Secretary of Health and Human Services, explained to the elite group of NEJM paying customers, how “30% of Medicare payments should be tied to quality or value through alternative payment models by 2016 (50% by 2018)”. Other than transforming traditional Medicare into a vintage 1990s HMO, the Secretary intends to make sure that “the same new alternative payment models and payment reforms are broadly adopted by a critical mass of payers”, effectively transitioning the entire country into managed care. Just like that.

By faith, and faith alone, embrace, believing where we cannot prove

The first MACRA option for physicians to get their little Medicare bonuses is to participate in an alternative payment model (APM), where doctors behave like miniature insurance companies, and provide care based on sound actuarial principles. Somewhere, somehow, someone figured out that fragmenting insurance pools into tiny groups of insureds provides better “value to consumers” than having large and diverse insurance pools. The same architects of health care improvement, decided that having each accountable care organization (ACO) purchase, implement and manage separate instances of  hugely sophisticated and very expensive actuarial (a.k.a. analytics or population management) software is another great way to add “value to consumers”.

The latest word about APM results comes from a research study sponsored by the American Medical Association, conducted by the RAND Corporation and published prior to the passage of the FFS killing legislation. To make a long and fascinating story short, and I highly recommend that you read this report, here are the key findings:

– Physicians in practice leadership positions were optimistic and enthusiastic about APMs

– Physicians not in leadership positions expressed apprehension with APMs (and resignation), because of additional burdens they did not believe would improve patient care

– APMs caused practices to merge, become affiliated with or become owned by hospitals, to enable capital investments in computers and data infrastructure, to better negotiate with health plans and to mitigate fear

– APMs had negligible effects on the aggregate income of individual physicians, since financial incentives were not passed through to physicians

In summary, it seems that APMs are well positioned to change absolutely nothing, with the possible exceptions of increased prices for medical services due to consolidation and the massive burnout of doctors, while providing a steady source of government and health plan “incentives” to pay for more computers and more administrators.

A brand new study of 32 Pioneer ACOs, published this month in NEJM, calculates that on average the ACOs generated 1.2% savings, approximately $120 per member per year, in 2012, with no substantial changes to “quality” as measured by mammography screenings and lab testing frequency. Another, even newer study of the same 32 Pioneer ACOs, paid for by CMS and published in JAMA, found that the same 32 Pioneer ACOs generated approximately $427 per member per year savings, in 2012, with slight improvements in patients perception of their experience. The JAMA study looked at 2013 as well, and found a sharp drop in savings to just $135 per member per year.

Both studies acknowledge two glaring limitations. First, Pioneer ACOs were handpicked by CMS to be those organizations most likely to be successful from the get go. Second, these savings, or rather differentials in growth of expenditures, do not account for costs to set up and run an ACO. The more flattering JAMA study estimates $385 million in savings over the two years period for 32 Pioneer ACOs. This translates into an average $6 million savings per ACO per year. A separate report from the National Association of ACOs, estimates ACO costs in year one, ranging from $300,000 for a small ACO up to $6,700,000 for larger ones. The Pioneer ACOs in theJAMA study were rather large, with over 20,000 lives per ACO on average. Note that these costs do not include the costs to Medicare to run and administer the ACO programs. Put it all together, and this is starting to look more like robbing patients and doctors to pay for, you guessed it, more computers and more administrators.

The second option to get your MACRA incentives is the Merit-Based Incentive Payment System (MIPS). The structure of the MIPS is a monumental tour de force in micro management, petty vindictiveness and accounting, that combines all current Medicare initiatives (i.e. PQRS, value-based payment modifiers, meaningful use, and practice improvements) into one monster program designed to push all doctors into risk assuming APMs. If you are a glutton for punishment, you can read the English language translation, provided by the Ways and Means Committee. The only certainty here is that implementing this temporary payment scheme is going to cost taxpayers, directly and mostly indirectly, more than the amount of incentives slated for payment to physicians, with practically all additional expenditures to flow, yet again, to more computers and more administrators.

But FFS will rise, on stepping-stones of its dead self, to higher things

Whereas paying doctors a fixed fee for each service is considered an unholy abomination, paying Walgreens, Walmart, CVS, Teladoc, American Well, and the like, a fixed fee for each service is considered a Culture of Health. In a new and groundbreaking report sponsored and published by the esteemed Robert Wood Johnson Foundation (RWJF), a bunch of business consultants are making recommendations to the big box retail clinics industry on how to enhance their value proposition and “become a much more powerful enabler of a Culture of Health”.  Recommendations range from steadily increasing complexity of services provided by non-physicians in retail settings, to include chronic care management, and health care for children (casually dismissing recommendations from the American Academy of Pediatrics), to bundling and upselling “health” foods to patients.

Since telehealth is hotter than molten lava nowadays, the report includes analysis of the incredible cheapness of telehealth services “at retail clinics and beyond”. Before proceeding to recommendations about lobbying state legislators and public payers to allow and pay for unfettered access to telehealth services, the RWJF report is informing us that “the most common diagnoses made during telehealth visits are sinusitis, cold, flu, pertussis, and urinary tract infections—conditions also frequently treated at retail clinics”[emphasis added]. This bit was copied and pasted from an equally insightful marketing piece for the telehealth industry written by an expert actuary. It took major effort to restrain my urge to call the White House and ask the President to declare a national state of emergency and shut down every port of entry into the continental United States.

One would hope that the decision to eliminate FFS for doctors was based on something other than rattlesnake fables and whooping cough pandemics. One would also hope that decision makers observed and learned from, or at the very least considered, health systems of other wealthy nations that are supposedly better and cheaper. One would be wrong. According to the latest Commonwealth Fund international report on health care systems, it seems that many of those enlightened and cheap nations pay doctors mostly with FFS, some exclusively so, especially Germany, the economic powerhouse of the European Union. For some reason FFS seems to have no devilish toxic effects outside the international borders of the United States.

You may be tempted to blame the misunderstanding on clueless bureaucrats, accountants and bean counters who don’t understand patient care. You would be wrong again. Bureaucrats understand numbers. They understand financial and operational charts and tables, better than doctors do. The reason FFS is being killed off in America is not so we can achieve better results at lower costs as other developed countries have consistently done. FFS for physicians, and only for physicians, is being eliminated so we can roll out the cheapest possible substitute to medical care, and frankly dear doctor, with all due respect, you’re in the way.