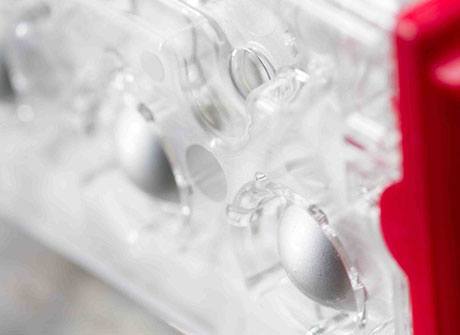 On Wednesday, Boston-based Partners HealthCare announced its selections for their first annual “Disruptive Dozen” that highlights 12 emerging technology that can potentially revolutionize neurological and psychiatric care over the next decade. Partners developed the “Disruptive Dozen” to reinforce its commitment to embrace medical innovations that can deliver the best care possible to its patients. The technologies were featured as part of the World Medical Innovation Forum held in Boston this week which focused on neuroscience.

For the nomination and selection process, more than 50 Partners HealthCare neuroscience experts were interviewed to elicit nearly 100 nominations. A select panel of faculty then ranked the finalists through a defined group process

“We hope that the selected technologies will provide physicians and patients with a renewed sense of optimism about the future diagnosis and treatment of neurological and psychiatric diseases, as well as encourage future medical innovation,” said  David Silbersweig, M.D., Chairman, Psychiatry, Brigham and Women’s Hospital, Stanley Cobb Professor of Psychiatry, Harvard Medical School, and Co-chair of the “Disruptive Dozen” selection committee.

The selected 12 emerging technologies selected by Partners Healthcare are as follows:

A variety of therapies for the early diagnosis and treatment of Alzheimer’s disease are being developed that have the potential to detect and treat Alzheimer’s long before symptoms manifest, including “Alzheimer’s-in-a-Dish,” experimental drugs to reduce amyloid in the brain, and blood tests to detect biomarkers. Given the expected rise in Alzheimer’s cases in the years ahead, early intervention will provide the greatest chance of halting or reversing disease progression.

2. Stem Cell Therapy to Repair and Replenish the Brain

The use of stem cells as a form of replacement or protective therapy for neurodegenerative diseases represents a promising treatment opportunity for Parkinson’s disease, multiple sclerosis, amyotrophic lateral sclerosis (ALS) and Alzheimer’s disease, all of which currently lack effective therapies.

Implantable wireless brain devices are being tested as a means of relieving depression, post-traumatic stress disorder, bipolar disorder and traumatic brain injury, as well as restoring movement in those with severe physical limitations. These devices represent a trend towards neural engineering, which seeks to manipulate brain signals in order to treat neurological diseases and impairments.

A variety of new therapies demonstrate promise for the treatment of severe resistant depression, including ketamine, medical gases and low-field magnetic stimulation therapy. These therapies present an opportunity for rapid stabilization and treatment for some of the most common and serious psychiatric disorders.

5. The Promise of the Focused Ultrasound

Transcranial MRI-guided focused ultrasound and focused ultrasound in conjunction with microbubbles allow physicians to target tissues deep within the body through the use of sound waves, as opposed to incisions and radiation. Focused ultrasound has the ability to revolutionize the treatment of conditions such as brain cancer and Alzheimer’s through its potential for greater precision and quicker patient recovery.

6. The Promise of Brain Biomarkers

Advanced diagnostic equipment is allowing researchers to identify biomarkers for various neurodegenerative and psychiatric disorders in blood, spinal fluid and brain-imaging patterns. The identification of biomarkers for these diseases will ensure the development of more effective diagnostic and treatment approaches in the future.

Several clinical trials have demonstrated promising results with regard to the efficacy of gene therapy for neurological conditions, raising the likelihood of its adoption in the clinic. Gene therapy applications could be used to replace or “turn off” disease-causing genes for a wide range of central nervous system (CNS) diseases, including Parkinson’s disease, ALS and epilepsy.

Sophisticated imaging systems such as PET, CT and MRI scans, ultrasound, and fluoroscopy will one day allow neurosurgeons to noninvasively locate surgical targets and distinguish between malignant and benign tissue, which will allow for minimally invasive, image-guided neurosurgery on the brain. Traditional brain surgery techniques will be replaced by molecular interventions ranging from alterations in brain circuitry to DNA modifications and the introduction of modified viruses.

9. Healing the Brain with Neuromodulation

Non-pharmaceutical, minimally invasive treatments ranging from pulses of electricity to light are being developed for the treatment of a wide range of neurological and psychiatric diseases. Electroceuticals—low-powered electrical devices placed on the skin or implanted—could be used to treat diseases ranging from depression and mood disorders to Parkinson’s disease, while low-current transcranial (through the skull) direct-current stimulation (tDCS) could be used to address chronic pain, depression and schizophrenia.

Intravenous immunomodulators, or checkpoint inhibitors, block the action of PD-I and other proteins that brain cancer cells use to escape recognition by the immune system, facilitating the body’s immune response against the cancer cells. Given the poor prognosis for patients with glioblastoma and other forms of brain cancer, these immunotherapies could translate into life-saving treatments in the near future.

11. Neuroimaging for Neurodegenerative and Psychiatric Disorders

Advanced neuroimaging techniques continue to build upon existing knowledge about brain functioning and neurological and psychiatric disorders. Research initiatives such as the Human Brain Project and Brain Initiative promise to yield valuable insights into the cause and progression of these diseases, as well as new opportunities for treatment.

Researchers are studying the 3.3 million genes of the microbiome to identify links between gut microflora and psychiatric and neurological diseases like multiple sclerosis and Parkinson’s disease.