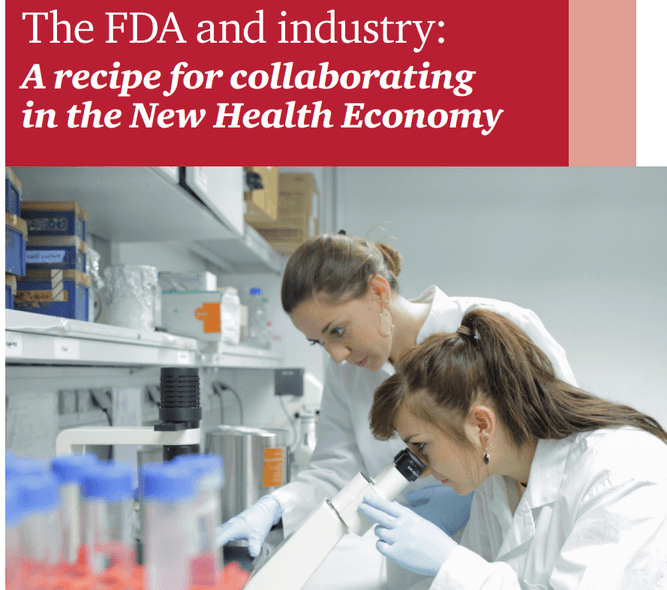 Consumers and drug and device manufacturers are changing practices and shifting attitudes toward the Food and Drug Administration (FDA).  Increased pressures for speedy access to breakthrough drugs and medical devices, and a focus on value in addition to medical benefit, are driving these changes. Those changes will likely put pressure on the FDA to consider changes as well. So concludes “The FDA and industry: A recipe for collaborating in the New Health Economy,” a new report from PwC’s Health Research Institute (HRI) based on findings from surveys of consumers and senior industry leaders.

“To meet 21st century demands for innovation, it will be important for drug and medical device manufacturers to collaborate with the FDA to consider changes to the regulatory framework,” said Mike Swanick, global pharmaceuticals and life sciences leader. “While recognizing the FDA’s investments to improve its relationships with manufacturers and speed drug and device delivery, manufacturers still want greater flexibility in product development and review.”

The report reveals how drug and device companies are adapting to the New Health Economy, including consumer and insurer focus on cost-effectiveness as well as medical benefit.  Forty three percent of survey respondents said they are willing to have their products judged based on both clinical and economic value, compared to just 14 percent in 2010.

Additional key findings of The FDA and industry include:

– Seventy-eight percent of executives said that the FDA has improved the quality and frequency of its communications in the past two years.

– Seventy-six percent think that the agency provides actionable feedback and 70 percent think it offered more applicable guidance, rules and regulations in the past two years.

As to healthcare consumers, the survey found that they want input into developing therapies.  Relatively few (39 percent) believe the FDA incorporates their views in the agency’s review process, and only 38 percent say that drug and device manufacturers adequately consider their views.

“With greater access to medical information than ever before, consumers are assuming responsibilities that have historically resided with the FDA or industry – such as developing guidance, creating incentive programs, and funding research and development directly,” said Michael Mentesana, PwC’s U.S. pharmaceutical and life sciences research and development advisory services leader. “As a result, companies have a real opportunity to seek out and use consumer feedback to better demonstrate value over existing therapies.”

The full report The FDA and industry: A recipe for collaborating in the New Health Economy is available at http://www.pwc.com/us/hripharmalifesciencesfda.

The FDA and industry: A recipe for collaborating in the New Health Economycontinues a series of Improving America’s Health surveys conducted by PwC that explore the PLS industry’s relationship with the FDA and how it is changing to reflect recent trends.  In the summer of 2014, PwC’s Health Research Institute surveyed 100 senior executives on issues such as regulations, the development of new therapies, and patient engagement.  Previous surveys were conducted in 1995, 1997, 1999, 2006 and 2010.

Survey respondents represented a broad cross section of the pharmaceutical and life sciences industry in terms of head count, revenue, and product lines. In addition, 1000 adult consumers were also polled about their views of the FDA, the pharmaceutical/life sciences industry and consumer access to therapies. Consumers were US registered residents and were randomly selected to participate in an online survey.