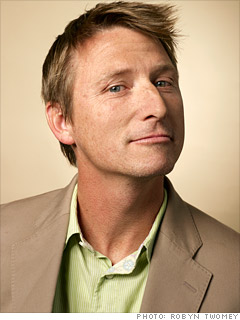 Jonathan Bush tells it like it is to pharma by Lois Drapin, CEO, The Drapin Group LLC

When I saw that Jonathan Bush was going to present at IIR’s ePharma Summit in NYC this past February, before he left for his announced leave of absence-sabbatical, I decided I wanted to hear what he was going to say to a room full of pharma marketers, brand leaders, and the digerati of pharma and its ecosystems of agencies and consultants. Wherever Mr. Bush is on stage, and I have seen him many times over the years, you can actually see-hear his mind working, his humor on over-drive and the laser efficiency of his storytelling.  If you stay with him, it is all gift-wrapped, personalized and delivered.

I am pleased to report that Jonathan Bush kicked pharma’s ass.  I am hoping it took all of those folks to a different place when they got back to their desks and meetings.

First, let’s not forget his reasons for being there.  As he stated, ‘I am the proud owner of Epocrates, Epocrates, Epocrates (product announcement).”   But now let’s take that a bit further.  He presented himself as a pharma outsider.  Indeed.  And pharma is now finding itself more on the outside of the healthcare delivery process than ever before.

athenahealth, Inc. started in 1997 as Athena Women’s Health, a birthing company.  If you don’t remember this, I do and I was so excited about it.  Athena Women’s Health had developed a network of midwives, nutritionists, social workers, physicians and collaborative practices that had access to or owned birthing centers.  At the time I was the first person in Wyeth’s newly formed innovation team, trying to re-thing pharma’s relationship with technology.  My job was to bring new technology-driven relationships into use.  Wyeth was the declared leader in “women’s health”—it was the largest player in the pill space for pills for women—those in menopause in particular, hormone replacement therapy and also with a diet pill.  (Both drugs later turned Wyeth toward very troubled waters caused by adverse events.) I came from outside of pharma at the time and during my first day at work I was greeted by a story told to me by a top pharma marketing person about how the CEO of American Home Products had returned to the company after his first time in front of Congress.  The way this came down to new employees was that the CEO never wanted to be in front of any Congressional review ever again, and that his message to the troops was clear:  Sell bigger pills, and sell more of them.   That’s it.  Whether he ever said those words doesn’t matter.  The fact is the culture at the time embraced the message as its own.  It took me over two years to complete one strategic alliance to bring patient longitudinal data into action for Wyeth. It was incredibly frustrating. (I spoke to Judith Falkner at Epic in the 1990s and she told me quite clearly “I don’t believe in sales people.  I am the person that makes the decisions.”) Jonathan brought up Athena Women’s Health to prove the point that sometimes you start with a great idea, but it just doesn’t work out.  “We lacked the business model to pull the good thing through.”

The ‘good thing’ for Athena Women’s Health was outcome… the idea of “selling healthier babies at a lower cost.”  When Athena Women’s Health didn’t work, Bush saw the problem as being too ambitious.  “We narrowed down to “we were going to sell the stuff that doctors didn’t know to them so that they could then go into business selling outcomes.”   Bush said they would “sell paid claims, filed charts, and compliant patients of particular note.”  But let’s be clear.  “Our business model, said Bush, “depends on the patient doing the thing that the doctor wants… in order for us to get revenue.  So we may use a web app, carrier pigeons or trained llamas to get that outcome in the office, to get that patient  to come into the office or a patient paying the bill or a patient picking up their prescription, or a patient coming back after an abnormal blood test.  That is the revenue event for Athena, not the app. “

The rest is history.  athenahealth is now a public company, has the number one rated patient portal and was rated the overall #1 HIT company in the KLAS survey.  These things are not lost on Bush’s sense of irony, that “lucky convert.”

Pharma needs a conversion: “Pull the good thing through”

Listen my children, and you shall hear:  The addressable market according to Jonathan Bush

Here is Bush’s view at the addressable market in the flood of his own words:

“You have lack of progress in the total cost of care.  And then you have a sort of negative shock to the economy which automatically gives rise to folks who will take advantage of the democracy to steal the public good, to demand the public good to force the public good from on high.  Obama is elected, the health care act is passed and the enormous amount of administrative requirements is now pressed down as best as they can do.  Folks in Washington who have come from the Temple of Harvard rush in and invent rules that if you squint hard enough if everyone does this a good thing will happen and they start marching in and first we are going to give you a bonus and soon we are going to give you a punishment and who knows what after that.  And so doctors immediately do …whenever is something too expensive or too complicated…doctors do one thing and only thing—that’s they flock to the hospital because they have been receiving largesse from them in the form of patient referrals for years and  years and they say ‘you deal with it.’  And this happened.  At the inauguration of Obama you had you about 26% of doctors employed by hospitals and about another 20% affiliated in some way and the number immediately doubles over the next four years to today over 60% are employed by hospitals and almost 70% are tightly affiliated.  Poor hospitals…they are saying ‘I gotta do it.’  They want me to buy them and I need them to not be mad at me.  And so they take on these acquisitions and they themselves start to crumble under the now double weight of the administrative burden of the doctor plus that which they need to go through and we have seen a large sort of hospitals….hospitals aren’t allowed to die by law.  I mean the congressman finds out…I mean how many votes are going away, no way you’re not dying and so they merge and then they get subsidized.  And so you see an enormous  exit…hospitals exit the theater.  2013 is well over 150 mergers now where there are only 4,350 hospitals left and now we are down to less than 1800 decision makers in the entire two trillion dollar market or something like  1,700 and some actual buyers. “