Most of the current diabetes mobile apps on the market fail to comply with standards that are widely accepted in the rest of the app market, according to Ralf-Gordon Jahns, founder of market research & consultancy Research 2 Guidance. In their latest study on the mobile health app market titled, “Diabetes App Market Report 2014” reveals diabetic apps failed to utilize their full potential and were either too narrow or too technical to become a daily companion for consumers.

“To become a daily companion, diabetes apps must be individualized and fun to work with. They have to make life easier especially by automating the collection and sharing of data,” said Ralf-Gordon Jahns.

A user of today’s diabetes apps described their frustrations, “the intentions behind the apps I’ve seen are great, but in practice they quickly lose their luster. If an app isn’t integrated into something I already do or use quite often, or isn’t very simple [not time-consuming], I’ll abandon it. I don’t want to log in to another website; I don’t want to go somewhere I’m not already at – which, social-media wise, is going to Facebook. What I want is something that makes my life easier rather than cause me grief when I forget to check in or enter the info, and it shouldn’t take longer to load an app and do what I need with it than it does to open a notebook and use a pencil.” 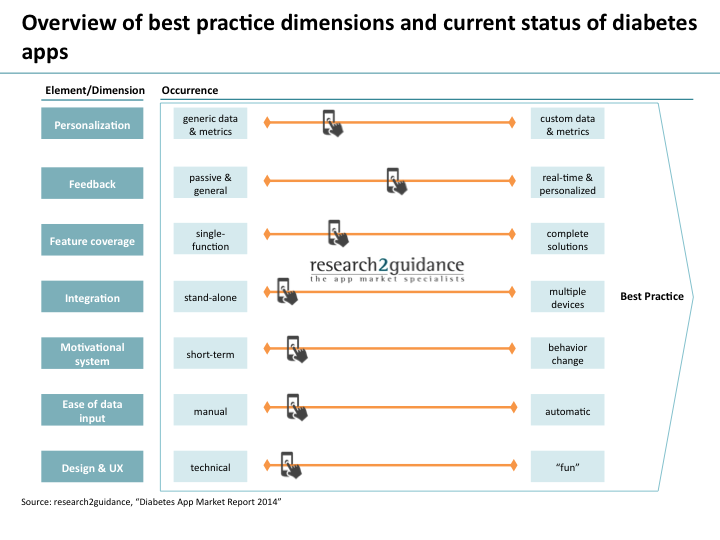 A successful diabetes app should allow the user to choose how data is displayed, how and what information is transmitted to third parties (such as family, friends, physicians, social networks), what metrics are being measured and what are the optimal levels for these metrics, taking into account various lifestyle factors. Personalization also means that diabetes apps should provide active feedback and actions to improve behavior based on the data generated by users.

In order to simplify the self-management of diabetes apps, which address users with this condition should include all the tools and features that are needed for successfully keeping diabetes under control.

Diabetes apps, just like mHealth apps in general, should be designed in a way that allows users to input and access their data through multiple devices from various sources. Ideally, diabetes apps would be integrated with external devices, sensors, databases and other apps, which help users achieve better control of critical health parameters in the management of diabetes (such as blood glucose levels, blood pressure, cholesterol), support the necessary lifestyle changes (weight management, exercise, nutrition) and provide new ways for connecting patients with their physicians (electronic health records). Integration gives access to a unified view on the patients’ health status and diabetes management, making it easier to identify trends, possible improvements and provide high-level personalized feedback. This also facilitates the integration of diabetes apps in the patients’ daily live and the result is simplified use and monitoring, as well as increased acceptance.

A good diabetes app should include a well-designed motivational system, which engages users, provides incentives for constant use and ultimately leads to behavior change. Best practice apps make full use of gamification elements.

The usage should be effortless. Diabetes apps should fit seamlessly into users’ lives and routines, making the input of data as easy as possible without requiring too much effort from the users. Solutions should automatically transmit their glucose readings, for instance, from the blood glucose monitor to the mobile device.

The aesthetic dimension plays a very important part in keeping users engaged and motivated and, at the same time, it can constitute a powerful differentiation element. Just like with any other app, the design and initial visual impression determines the entire user experience and can definitely determine whether a diabetes app is successful or not.

While this report focuses on diabetes apps, these best practices can apply to all mobile health related applications.