As we close the year 2013, Margarit Gur-Arie provides her reflections with the top 10 accomplishments of the U.S. healthcare system in 2013.

It’s that time of year when the Organisation for Economic Co-operation and Development (OECD) publishes its “Health at a Glance” comparative health indicators, and The Commonwealth Fund follows with an international survey of healthcare related activities. A cursory review of these documents always ends up with the customary assessment of American healthcare: much more expensive than all others, wasteful and inefficient. But this is the month of December and healthcare workers are people too, so maybe a short moratorium on bad news and criticism may be in order, allowing these folks to pursue a little bit of happiness during the Holiday season. A deeper dive into the vast amounts of data in the OECD report exposes all sorts of measures where the United States health system performs magnificently. Therefore, without further ado, let’s look at the top 10 achievements of American healthcare.

10. Generic prescription rates in America are highest in the world.

In fact, the rates are so high that the OECD didn’t dare show them. The best generics utilizer in the OECD report was Germany at 76% of prescriptions volume in 2011. The U.S. comes in at a whopping 80% in 2011 and 84% in 2012. Not only that, but the U.S. is also #1 in per capita spending on medications, and if 80% are low-priced generic drugs, imagine how many more drugs we get to take. This speaks volumes about our new value-based healthcare system.

9. America was once again able to maintain the second lowest number of physicians per capita among developed nations, and well below the OECD average.

Obviously, this spells productivity like no other metric can, and it’s most likely due to labor saving innovations, such as Electronic Health Records. With medical school graduation numbers at the bottom of the pack, the future will no doubt bring many more innovations to further increase the efficiency of American doctors.

8. Americans are making big strides in technology use for communicating with their doctors.

We beat practically every single developed country at some email metric, which is irrefutable proof that Meaningful Use is working. 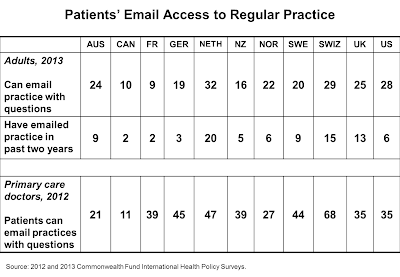 7. As in previous years, America is holding the line on hospitalizations.

Way below the OECD average and practically last in cancer discharges (except Mexico, where they don’t have cancer), our health system figured out much more cost effective ways of treating an increasingly older population, which leads us to #6.

6. No one, and I mean no one, spends less of their healthcare money on hospitals than the U.S.

We are #1. And no one spends more than us on more efficient outpatient care, which includes inpatient physician services when billed separately. It seems that all those inflammatory articles in the media regarding hospital price gouging are pure nonsense. 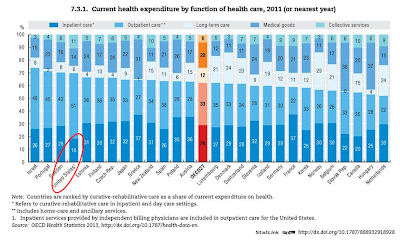 5. Not only does America have less hospital beds than most OECD countries, we are not using them very much.

With an occupancy rate second to last, it seems that if we closed a third of our hospitals, as some reformers are suggesting, we would be just fine (with room to spare), and we could save oodles of cash. Finding inefficiencies that are easy to fix is a good reason to celebrate.

4. Quality of care for the people that do end up in a hospital is pretty good.

On multiple variables of mortality and surgical complications, the U.S. is consistently among top performers. Not the absolute best, but a top performer nevertheless. Not to mention that compared to the best performers, your chances of leaving an American hospital with an instrument lodged in your bowels are much lower than in some very high performing countries. For all the alarmists having visions of Jumbo Jets crashing out of the sky daily, killing thousands of innocent patients unbeknownst to anybody else, slow down folks, there are no Jumbo Jets; maybe a Cessna here and there, but definitely no Jumbo Jets.

3. Our children are the best in the whole wide world.

The Puritan founders would have been so very proud of them. American kids are dead last when it comes to drunkenness and smoking. Although they are just average when it comes to eating their fruits and vegetables, our 15-year-old boys and girls are the most physically active of all other OECD nations. Strangely enough, they are also among the chubbiest, but with all that physical activity, this is bound to resolve itself in the long run. It may be too late for us, but the future looks bright for the young ones.

2. America is the healthiest nation in the world, bar none.

Yep, you heard right. Almost 90% of Americans consider themselves healthy, and I have no reason to doubt their self-assessment. Much has been said about other countries having higher life expectancies. The difference between the U.S. and Japan is over four years of life, but consider this: less than 1 in 3 people in Japan report being healthy. I don’t know about you, but 78 years of healthy life sounds much better to me than 82 years of living with disease.

And the Number 1 accomplishment of American healthcare is (drumroll please) Obamacare.

Yes, Obamacare went viral, probably through the Internet or something like that, because Obamacare is now a global phenomenon affecting every single OECD nation. 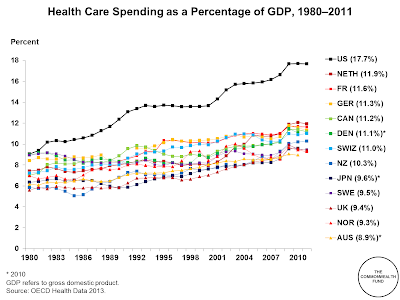 A couple of weeks ago Paul Krugman, winner of the 2008 Nobel Prize in Economics, and self-described liberal, let us in on a little secret. Obamacare, it seems, is the only logical explanation for the reduced growth of healthcare spending in the U.S., and Obamacare began “bending the curve” from the moment it was signed into law in 2010, long before it was formally implemented. Since, according to OECD data, all other nations have experienced the same “curve bending” effect since 2010, we must conclude that Obamacare has reached all developed nations instantaneously (the Internet is very fast). 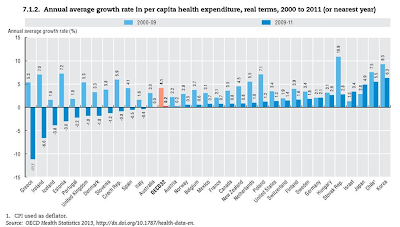 And in some cases (such as the UK, not to mention Greece), Obamacare seems to be working even better than in the U.S. So here you go, once again America saves the world…. Merry Christmas American Healthcare!

« The Velocity of Big: IMS Health Launches with Plans to Industrialize mHealth
Infographic: 6 Shocking Facts About Your Medical Records »