How Do We Know If We Are Spending Too Much on Healthcare? Since healthcare is  a huge and complex beast, perhaps the best place to start is primary care.

We spend a lot of money on health care in the U.S., but we spend a lot of money on other amenities as well, so how do we know if we are spending too much money on health care? The phrase too much implies a frame of reference and some sort of valuation; too much for too little value, or too much compared to others, or both. Leaving aside the ideology of who should pay for what, the only thing that is increasingly obvious is that other developed nations, a natural frame of reference, are spending at most two thirds of what we do and their health results are as good, if not better than ours. You would think that the next logical step would be to observe how these other nations finance and deliver care, and apply lessons learned to our system, and there is no shortage of observational studies, surveys and reports.

Since health care is a huge and complex beast, perhaps the best place to start is primary care, which, as its name implies, should be the point of entry into any health care system. As it turns out, the Commonwealth Fund has a great survey of primary care physicians administered in various developed countries around the world, and in 2012 they published the latest one in Health Affairs. The survey includes 11 developed countries, Australia, New Zealand, the United Kingdom, France, Germany, Switzerland, the Netherlands, Norway, Sweden, Canada and the U.S. The international primary care survey can be broken down into areas pertinent to the trifecta of our health care reform efforts: provide insurance coverage to all citizens to improve access and reduce financial barriers to care, measure health care delivery and reward quality performance, use health information technology to enable cost-effective health care.

The computerization of health care through EHR adoption and interoperability in particular are at the forefront of any health care conversation nowadays. It should be interesting to see how the U.S. compares with all those more efficient nations in this area. Rearranging the Commonwealth Fund survey results to gain a better visual understanding, here is how Health IT looks across global primary care. [Note: countries are sorted top to bottom in descending order of per-capita health care expenditures, with the U.S. at the very top of each chart.]
There seem to be countries more advanced in adoption and availability of Health IT amongst primary care physicians, but there are also plenty of other developed countries that lag behind the U.S. The same is true for online patient access and exchange of clinical information between care facilities. Note that the exchange of discharge summaries and specialist reports does not necessarily imply the existence of EHR interoperability as we define it, and as we bemoan its non-existence, in the U.S. The survey only asked if the information was available, not how it was made available. Another observation we can make is that our three graphs do not exhibit the same behavior, which means that nations that have high EHR availability are not necessarily better at exchanging clinical information or at giving patients online access to basic transactions. We could go on and examine each data point in detail, but the immediate conclusion must be that there is practically no correlation between Health IT, including exchange of clinical information, and the cost-efficiency of health care in this cohort. We should also note that there is no one metric for which the U.S. ranks dead last.

How about quality? Is there a correlation between advanced health IT and better quality of care? The primary care survey does not provide an answer, so we add the2012 OECD health care costs, utilization and outcomes data report, and pick a comprehensive measure such as Mortality Amenable to Health Care. France, which has the lowest rates of such mortality is also one the countries with less than stellar health IT, while the UK and New Zealand which are armed to the teeth with EHRs have some of the highest avoidable mortality rates. Obviously the U.S. is worse than any other developed OECD country.

Measuring and paying for quality

This is the other major campaign conducted by CMS because it makes sense to “align incentives” and replace “volume with value”, which is another name for reducing utilization of services across the board. Of course, only financial incentives are considered, because innovative modern thought does not recognize any other types of incentives.
Here we see an interesting picture. While the U.S. is comfortably in the upper middle of the pack when it comes to measuring performance, it is also one of the stingiest when it comes to actually paying out incentives. Either way, the U.S. is not an outlier for any of the metrics included in this category. Similar to Health IT, countries who measure more and/or pay out more incentives are neither less expensive nor do they have better quality metrics. 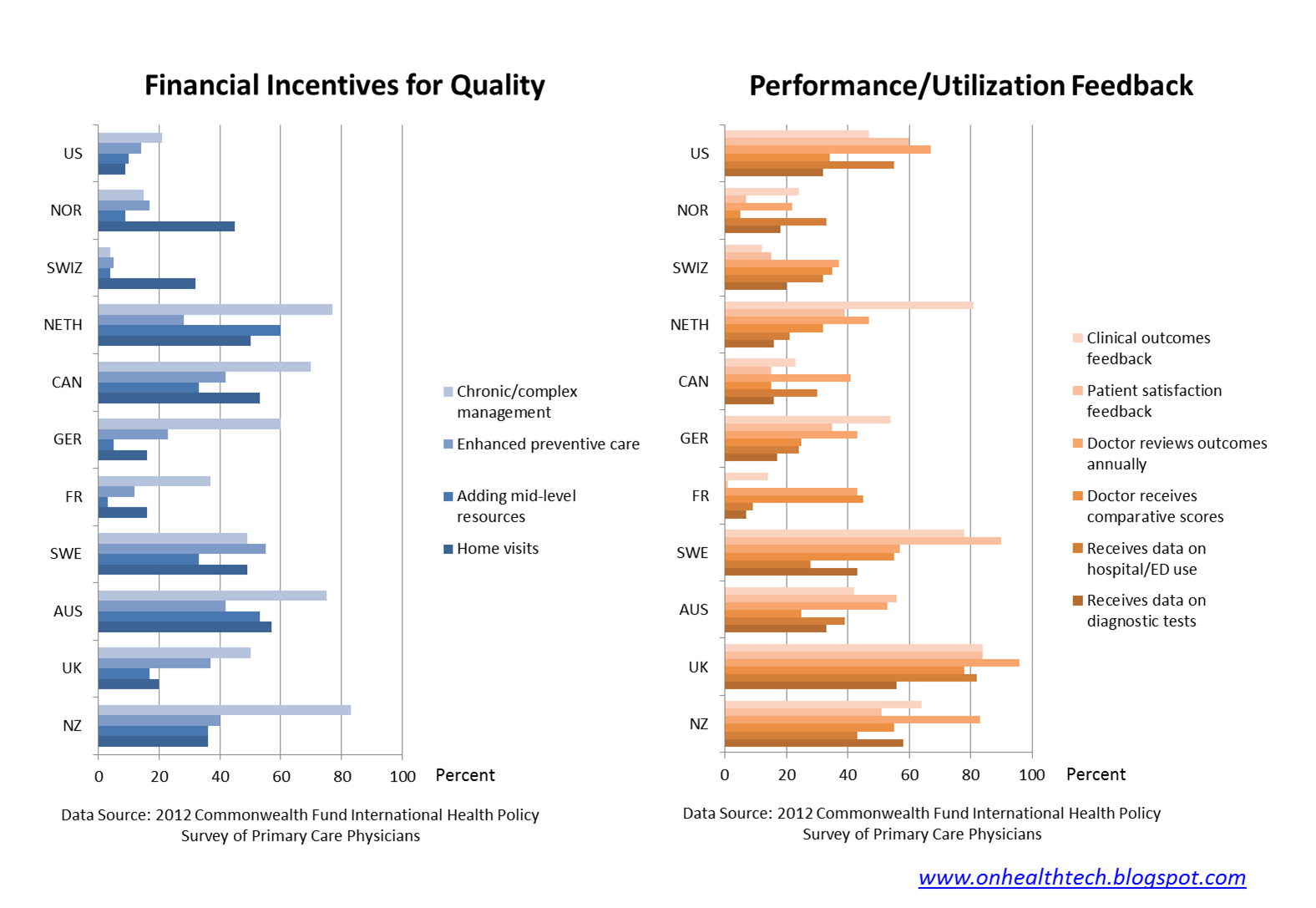 The common wisdom says that nations with universal health care, a.k.a. socialized medicine, are by definition doomed to suffer from poor access to care, such as long waiting times for appointments. In contrast, countries where health care is market driven will have no queues and no shortages. Unfortunately, since we all live here in addition to just looking at graphs, we all know that some doctor appointments are not as abundant as we would like, and the graphs below confirm this perception. 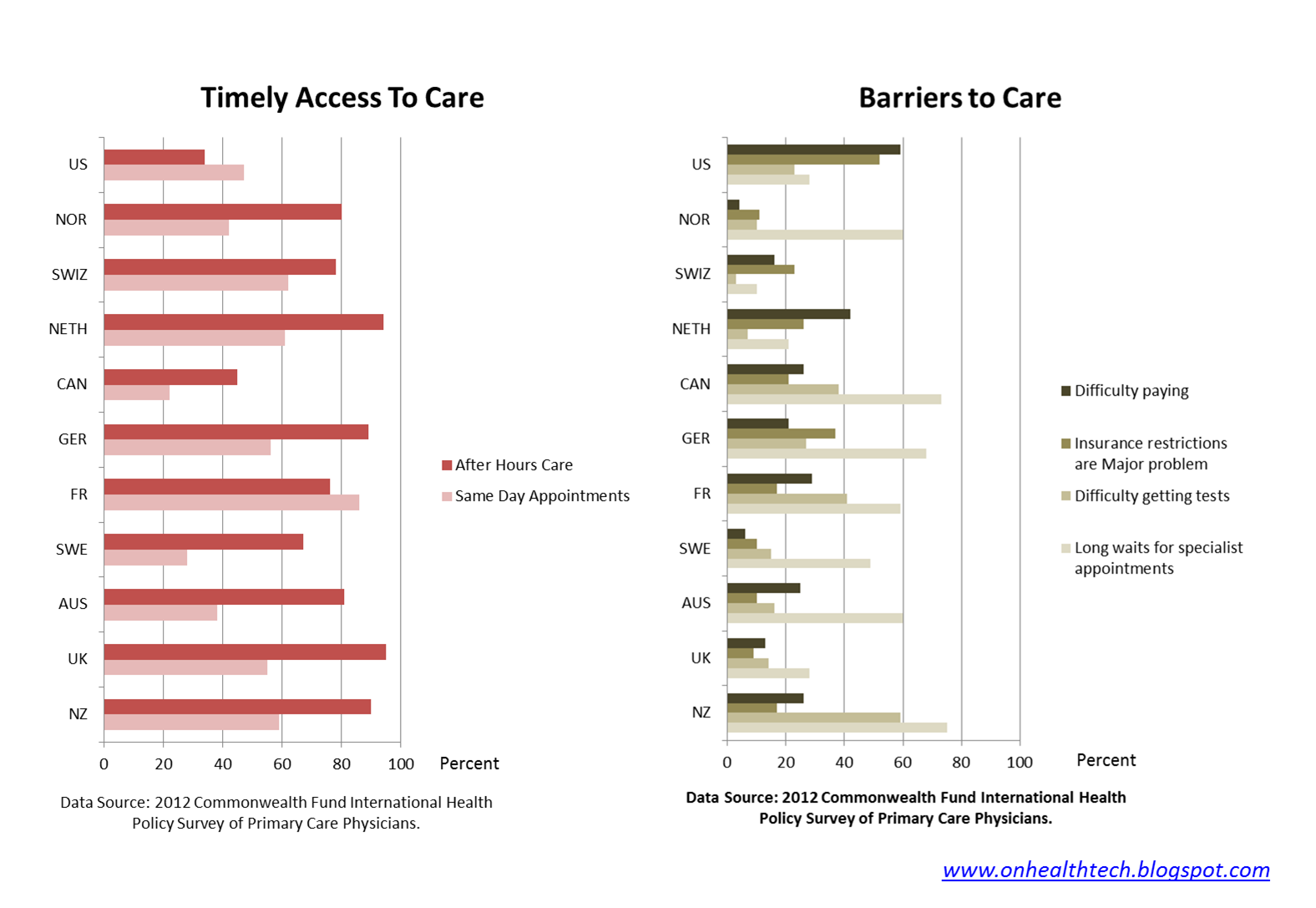 First, it seems that obtaining care after business hours is much harder in the U.S. than in any other country, while the ability to see a primary care doctor at short notice in the U.S. is middling at best. On the other hand, obtaining a specialist appointment requires less waiting in the U.S. compared to most other countries, but not all (the Swiss and the Dutch do better on all counts).  When it comes to financial barriers to care the U.S. reigns supreme as 59% of America’s primary care docs report that their patients often have difficulty paying out-of-pocket costs. Another uniquely American barrier to care is posed by insurance coverage restrictions which create major time concerns for U.S. doctors.

So where is our quasi-scientific discussion taking us so far? Health IT does not seem to be a significant differentiator between the U.S. and the more efficient countries surveyed, and neither is measuring performance, or quality. Incentives for personalized services such as chronic care and home visits are generally lower in the U.S., and so is timely access to primary care doctors. Compounding an existing access problem are the significantly higher financial difficulties of Americans to pay for health care services, and restrictions on medical practice imposed by insurers. Comparing these observations with the stated goals of health care reform in the U.S., one would be inclined to conclude that other than extending health insurance coverage to all U.S. citizens, we are pretty much wasting our time and resources, if our goal is to achieve the better results enjoyed by other developed nations.

This is not to say that computerizing medical records, exchanging clinical information, or providing electronic services to patients, are not worthwhile endeavors, but we should understand that investments in Health IT are not related to either reducing health care costs or improving quality at this point. It seems logical, and we can certainly hope, that better IT will lead us to health care improvements, but hope is all it is, and there is no real evidence* to support this assertion, given the current state of technology. Investments in Health IT should be viewed as a long term proposition, definitely worth researching and exploring, but expensive and often centrally planned massive Health IT deployments have been anything but cost-effective not just in the U.S., but also in the UK and Australia.

Timely access to primary care is often discussed in the U.S. and largely attributed to a shortage of primary care physicians. Why the richest country in the world, who pays the most to its physicians, is experiencing a shortage of doctors reminiscent of third world countries, particularly in an era of globalization and workforce mobility, remains a mystery to me. Even more mysterious are the proposed solutions to said shortage, such as redefining primary care away from traditional doctors to less educated resources and other professions such as pharmacists and optometrists. Here is something to ponder for those considering moving the goal posts of primary care: in the Netherlands, for example, approximately 4% of primary care visits result in referrals to secondary care.

Our obsessive-compulsive efforts to measure performance of primary care is a slightly different problem because we are approaching measurement with a clear intent of reducing service utilization, as in “replacing volume with value”, fully knowing that U.S. utilization is already lower than most other countries (with a few notable exceptions that should be addressed individually), and with a non-existent definition of “value”, other than mid-point process metrics. However, paying primary care physicians for value added activities such as chronic care management (with or without a quality component), or for making house calls, should probably exceed the levels paid in other countries considering the higher prevalence of chronic disease in the U.S. and its disproportionate contribution  to total health care expenditures.

And while we’re on the subject of volume and value, it may be useful to peruse theAppendix of the Health Affairs article and/or another great Commonwealth Fund report, International Profiles of Health Care Systems, 2012, and see how the scourge of fee for service in the primary care cottage industry is dealt with in countries with lower costs and better health outcomes. Surprisingly, in all but one tiny nation, primary care is delivered by physicians in small private practice, paid mostly fee for service, and this includes bastions of government run health care like the UK and Canada. Perhaps the architects of health care systems in those countries understand that a system without checks and balances is bound to spiral out of control, and perhaps they understand that independent primary care, serving in the dual role of medical advisor and patient advocate, provides exactly the checks and balances required in every healthy system.

*Thank you Tim Cook for bringing Dr. Robert Hoyt’s presentation to my attention

Margalit writes regularly about healthcare technology on her site: On Health Care Technology